???
Eddie, also known as Eddy and Flip-Top, is an item transportation robot that first appeared in Mega Man 4.

Eddie is a small red robot with green eyes, black face, a mouth and legs. He has a red helmet in the games, but his Ruby-Spears appearance gives him a green helmet.

Eddie was created by Dr. Light to carry items for Mega Man. (According to U.S. game manuals, Dr. Light built him as his personal cybernetic suitcase.) He is equipped with a material transfer unit that allows him to relay an unlimited amount of items from Dr. Light's Laboratory, but as Dr. Wily (using Dr. Cossack) attacked during his contruction, Eddie is sent incomplete to assist Mega Man in the battle and is unable to choose items, giving them randomly. Like Rush, he is equipped with a sensor that identifies Mega Man's exact location. The sensor allows him to appear by Mega Man’s side instantly whenever he is needed. He has a jet engine that allows him to fly.

Eddie appears as an collectionable trophy in Super Smash Bros. for Wii U. 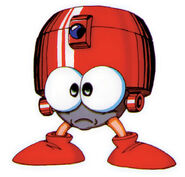 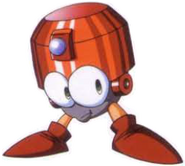 Eddie's artwork from Rockman Complete Works.
Add a photo to this gallery

Retrieved from "https://hero.fandom.com/wiki/Eddie_(Mega_Man)?oldid=2238128"
Community content is available under CC-BY-SA unless otherwise noted.