Leader of the Eds
Student

Some Level of Intelligence

Eddy is one of the three protagonists/main protagonist in Ed, Edd n Eddy and the self-appointed ambitious leader of the Eds.

Eddy is often selfish, and mostly works for his own interests, sometimes even neglecting his friends. Because he is frequently overambitious, deceiving, loud, and power-hungry, his peers often socially reject him. Kevin describes him as being "desperate" on more than one occasion, as Eddy is indeed starved for social acceptance and he is irritated by the fact that his rival Kevin is the most popular kid, whereas he is not even as popular as Plank.

A good example of his selfishness and greed is in "Brother, Can You Spare an Ed?" After manipulating Ed into buying jawbreakers instead of fudge for Sarah, Edd comes up with the idea of paying back Sarah, with interest. Eddy (more for himself than for Sarah) comes up with a scam that has Kevin giving Edd and Ed painful wedgies and hanging them from a tree, and afterward Eddy uses them as piñatas in a piñata scam with Jonny trying to get a prize out of them.

Eddy somewhat lives in his own world, in which everyone loves and admires him. In this world, he is more intelligent than Edd and is the literal King of the Cul-De-Sac. This dream world was shown during his part of Jonny's bedtime story in "Once Upon an Ed".

Eddy is possibly paranoid of Kevin as displayed in "The Luck of the Ed". After Ed forgets where he hid Eddy's prized magazines he suspects Kevin of stealing his magazines and that Ed, Edd and Jimmy are all in on the imagined heist.

Eddy has also displayed cowardly behavior on more than one occasion, where saves his own hide (or get free jawbreakers) rather than help his friends. Despite his horrible treatment, he shows that he does care about them and really cherishes their friendship. Although they were some episodes who showed these trait (like in "A Fistful Of Ed" or "Momma's Little Ed"), the most prominent one is in the movie, which matches with his character development: He saved Ed from an angry Rolf in the car chase, cried for an apology to Edd by admitting his faults, and smiles when Edd comforts him after showing remorse from his actions in the end of the movie.

Though these traits might seem to be definitive parts of his character on their own, they can also be easily explained. Many of his negative traits come from his brother, who (according to Eddy) also conned people, although much more successfully. His brother was accepted into society easily, and Eddy was respected because he was with him. After he left, Eddy decided to follow in his footsteps, but failed miserably in the process. His brother was popular because his scams and pranks worked, while Eddy's backfired and ended in him and his friends getting pummeled and walking away empty handed. Eddy's brother was someone who people wanted to be around, because he was fun and popular (despite in his only appearance seeming to be a ruthless bully).

Eddy is known to hate birds. This is first shown in "Virt-Ed-Go" when after the Eds retrieve a quarter from the sewer, a bird (possibly a seagull) flew in, and took the quarter out of Eddy's hand, and flew away. The bird shows up again, when the Eds are looking at a tree and the bird's nest falls on Ed's head, Eddy realizes it is the bird, and the bird flies away, Eddy says "I hate birds!" In "Button Yer Ed" and "Will Work for Ed", he is attacked by the warmongering rooster. In "It Came From Outer Ed", crows were summoned by a curse made by Ed's scam which caused them to attack the Eds.

Eddy has shown some level of intellect throughout the series by concocting efficient scams like the thingamajig, Eddy's Career Counseling, the Ed Theater, and the "Canadian squirt guns." To a degree, he shares with Edd the ability to make useful items out of scratch or random items lying around. For example, in "Postcards from the Ed", he off-screen constructed the "Eddy's World-Class Deluxe Tour Bus" also he built the thingamajig (with the help of Ed and Edd) and possibly the Professor Scam Flyer, he built the alien vacuum and constructed a few prototypes. He can also build the feared El Mongo Stink-Bomb.

While not as smart as Edd when it comes to straight up intelligence, Eddy does indeed possess a wide and immensely varied knowledge of pop culture. Several times throughout the series he has made references to not only famous movies/actors/directors but also to more sophisticated historical individuals such as Henri de Toulouse-Lautrec and Mikhail Baryshnikov.

However, in the movie, the reason of his behavior it's explained: It turns out that all his selfish and mean traits were all a mask, only acting like his brother just to earn his brother's respect and be friends with everyone; which had the opposite effect and nearly lost his dear best friends because of his behavior. His true self is a sad, misunderstood and self-hating kid who yearned love and respect and was abused and mistreated his entire life.

Eddy is very sensitive about his height, which suggests he may have a Napoleon complex. Eddy detests school, and has more than once has tried to escape it. His report card not only has straight F's, but also has teacher's comments filling up the entire reverse side of the card. His poor grades are more than likely due to a significant lack of effort on his part. His ideas for scams are regularly creative and clever, showing a great deal of intelligence, he taunts and jeers Sarah to the point where she loses her temper and seizes him and his friend.

At home, Eddy loves his retro-styled room. Some of the items inside it are a lava lamp, a large, circular king-sized bed, a disco ball, and a turntable. Eddy also has a decent-sized collection of vinyl records to go with the record player. Eddy is mostly seen commanding the two Eds into building the scams while he does either non-physical work or no work at all. He probably enjoys cooking, as he often offers to make his friends lunch, especially buttery omelets. These omelets are often remarked upon by him, and it seems he is quite prideful of them, to the point that he believes they are the best ever.

He is also highly impatient and is unwilling to wait for even the smallest amount of time. This is best shown by his unwillingness to wait one minute for a microwave burrito to cook in the episode "Oath to an Ed". He also jumps to conclusions very quickly, to the point where he issues ultimatums to those he is falsely accusing, such as when he accused Ed and Edd of working for Kevin in "The Luck of the Ed". It must be granted that he was very paranoid at the time, but he does regularly jump to conclusions about the guilt or innocence of others (see the suspect list in "[[w:c:ed:If It Smells Like an Ed".

One point of pride for Eddy is his big brother. Eddy's Brother is his supposed idol, and Eddy is fast to point out ways in which he resembles his older brother. Eddy also frequently brings up his sibling, especially how he taught Eddy everything about scamming and how his brother ran the cul-de-sac before he left home. He also uses his brother as a threat more than once (notably in "Ed... Pass it On..."). Even when it becomes clear to everyone in Ed, Edd n Eddy's Big Picture Show, Eddy doesn't confess how his brother isn't what he often claimed to be until after his brother is knocked out.

Eddy as a toddler. 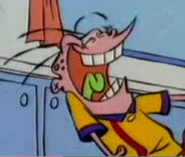 Add a photo to this gallery
Retrieved from "https://hero.fandom.com/wiki/Eddy_(Ed,_Edd_N_Eddy)?oldid=1162002"
Community content is available under CC-BY-SA unless otherwise noted.