Director of her Orphanage
Sorceress
Diplomat

To be freed from Ultimecia's control (succeeded).

Edea Kramer, also known as Sorceress Edea, or Matron (in Japanese: ママ先生, Mama-Sensei), is a powerful but kind-hearted sorceress and a temporary-playable character in Final Fantasy VIII. She first appeared as a mysterious woman appointed as ambassador to the powerful country of Galbadia and later acts as the primary antagonist of the first half of the game while she was in fact being possessed by the malevolent Sorceress of the Future, Ultimecia herself.

When first introduced, Edea is possessed by Ultimecia, a sorceress from generations ahead in the future, and is thus portrayed as a vain, power-hungry, and remorseless tyrant. All traces of her once kind and loving personality are purged from her own character by Ultimecia's possession and replaced by an all-consuming desire for total domination.

In actuality, Edea is but a benign and gentle person. Although she has been under the stigma of being a sorceress ever since the age of 5, she has never resented the world for the prejudice it must have shown her - she spends her entire life devoted to helping others, focusing upon the children she cares for in her orphanage. With Cid by her side she would never have shown a single violent streak throughout her life, had Ultimecia not arrived and possessed her.

Edea loves children, as all of the children from her orphanage (which include the entire present-time cast of Final Fantasy VIII, except for Rinoa) remember her fondly, and are unable to wrap their minds around the idea their beloved Matron could ever do the evil deeds Sorceress Edea performs. Although Edea has never shown hatred for the rest of the world, she has shown a strong dislike for her own powers; she is more than happy to have given up her powers, although she feels guilty for having given them to Rinoa.

Edea is refined, sophisticated, and ladylike, traits particularly evident during her possession when Ultimecia used Edea's sophistication and great physical beauty to their optimum effect to beguile her enemies. She has a long black hair and brown eyes that are yellow when possessed by Ultimecia. Normally she wears a modest black dress with little jewellery, but while possessed by Ultimecia, Edea wears a purple skin-tight dress with a plunging neckline and feathers around the collar, a headpiece adorned with jewels and a metallic half-circle frame on her back with two long strips of sheer material hanging down on each side. Before revealing her face at the parade, Edea wears a red mask to conceal her identity. During close-ups of her face during FMVs, white lines can be observed extending from the corner of her eye and cheek.

When she was only 5 years old, Edea received the mystical energy known as the Sorceress Power from an unknown woman is part of a magical race of female spellcasters called Sorceresses. She eventually married Cid, who knew she was a sorceress. They led a happy life and started an orphanage for the Sorceress War orphans on the Centra continent, with the orphans referring to her as "Matron".

When Laguna Loire embarked on his search for Ellone, he visited the orphanage, questioning Edea on what she might know about how to enter Esthar. Later, nearing the end of the Sorceress War, Squall, Laguna and Raine's child, would also be sent to Edea's orphanage by the people of Winhill after Raine's death. Ellone came to the orphanage during the same time as Squall, whom he called "sis".

A few years later, 13 years before the start of the game, Edea met Ultimecia and a teenage Squall, both who had come from the future. Ultimecia was dying, having been defeated by Squall, and Edea received Ultimecia's powers. Squall told Edea about the SeeD and the Garden, saluting her with the SeeD salute, before disappearing. Stricken by this encounter, and the fact the Squall from the future had told her SeeD and Garden were her ideas, Edea and Cid began plans to create them. Cid left the orphanage to look for sponsors, as they needed funding, and she stayed at the orphanage with the children.

Later on, after Ellone was being sought by Dr. Odine to complete his research on her, Edea created the White SeeD, a group of older orphans assigned to protect Ellone. At this point, Edea and Cid were permanently separated. Cid became the Headmaster of Balamb Garden, his quest being to train young people, Squall among them, as SeeDs to become strong enough to one day take on Ultimecia. Edea stayed on the White SeeD ship with the other orphans and Ellone. 12 years after Balamb Garden's completion, Ultimecia possessed Edea and she left the White SeeD ship. The White SeeD and the other orphans were bewildered by this, and voyaged to Balamb Garden to tell Cid of this turn of events. Ultimecia, oblivious to how close she had actually been to this Ellone when first possessing Edea, used Edea's body and name as a vessel to seize power across the planet. Ultimecia wanted to find Ellone, and wanted to mobilize the Galbadian army to find her. To do that Ultimecia would need to take over Galbadia and she, under Edea's guise, allied with the corrupt Galbadian president Vinzer Deling.

During a live television broadcast, Seifer Almasy tries to assassinate the president and Edea/Ultimecia manipulates him and spirits him away with her. While possessed by Ultimecia, Edea's "shell" kills President Deling, survives an assassination attempt by SeeD, and takes command of the Galbadian army. She declares SeeD as an enemy and orders missile attacks on Trabia and Balamb Gardens.

While Balamb Garden escapes the missile attack, Trabia Garden is not as lucky. Later, forces from Galbadia, brought over by an invaded Galbadia Garden, attempt to invade Balamb Garden, with little success.

Edea falls in battle to the heroes and the near-death experience causes her sorceress power to leave her body and seek for a new host in Rinoa Heartilly. Ultimecia possesses Rinoa, and Edea regains control over her body and mind, explaining what had happened to her. Edea, however, at this point is unaware of having lost her sorceress powers, and only knows Ultimecia has left her.

Edea wants to ensure Ultimecia will never possess her again and joins the party for a trip to Esthar in hopes of Dr. Odine potentially ridding her of her powers. After reaching Esthar, Edea discovers she has already inadvertently relinquished her Sorceress Power to Rinoa. With the burden of her power finally lifted, Edea goes back to the now-ruined orphanage with her husband, where she would give shelter, advice, and background information to the party. Edea is later seen with her husband in Balamb Garden celebrating the victory over Ultimecia.

There are two themes accompanying Edea's presence. "Succession of Witches" (which was under the anagram "Fithos Lusec Wecos Vinosec") is the song that accompanies her when she is possessed by Ultimecia, most notably played when Edea/Ultimecia first encounters Seifer Almasy in Timber. The other theme is called "Truth", and plays at Edea's Orphanage after the revelation of her possession.

An icon sprite of Edea appears in the Pocket Station memorycard file manager.

Although not mentioned in the game, the player has an option to switch Ultimecia's normal outfit to Edea's outfit which is called "Edea's Corpse" in Dissidia 012 Final Fantasy.

Not featured in the first Dissidia game, the new outfit refers to Edea's time as a puppet under Ultimecia's control. Unlike Ultimecia's other outfits, she bears no wings in her normal form or EX Modes, though her EX Mode - to junction Griever - remains the same.

Edea appears appears in her Sorceress form as an enemy in Theatrhythm Final Fantasy: Curtain Call.

Edea is an ally, a summonable Legend and a boss in Final Fantasy Airborne Brigade. Her EX ability is Maelstrom.

Edea will likely start off with the lowest level when she is acquired as a guest party member - this is due to Edea, her-self, not actually engaging in much field combat before in her life - Ultimecia's time possessing her, not counting as a proxy for her own combat experience. Despite being the lowest level, Edea has the highest MAG (Magic Potency), MP (Mana Points) and Luck (Chances of critical hits), in addition to very high accuracy. Her combo of stats make her a magical power-house, able to cast any spell to maximum effect. Edea also has a very high affinity with each Guardian Force, allowing for maximum adaptability to the SeeD's Meta-Magic system. Edea's physical strength is one of her weaker stats but her health is in-fact the weakest. Even robbed of her sorceress powers, Edea can still use telekinesis and conjure icey spears to hurl at her foes in the form of her limit, "Ice Strike". Though once she passes on her sorceress status to Rinoa, Edea states she is inherently powerless, her life-up-to that point being spent as a sorceress has made her a master of arcane knowledge and casting, meaning once she is given a Guardian Force to empower her, she is easily the most potent spell caster in all of SeeD. As Limit breaks are inherent, Ice Strike, would not leave her once her powers are lost, and Edea's continued use of telekinesis may mean a part of Edea's brain as been stimulated from her time as a sorceress, meaning even without magic, she still has a form of ESP.

In story, Edea's was one of the two founders of SeeD, indicating she is at least partially responsible for an entire curriculum. As Cid has no prior magical experience, the Meta-Magic system was almost certainly the brainchild of Edea, being a sorceress. Edea's a master Triple Triad player, for in addition to high level cards, Edea's card combat A.I. empathizes a pensive play-style, she avoids power plays, and instead tries to lure her opponent into making the strongest opening moves, before she uses her stronger cards to turn theirs, turning her opponents offense into their downfall. When going up against Edea in Triple Triad, in addition to planning around the dreaded "Random" rule, which is prevalent in Edea's region, the player is best advised to either barricade their strongest cards in a corner or sacrifice weaker ones until Edea has used at least a couple of her stronger cards. Edea was appointed as ambassador of Galbadia, but as this was just as Ultimecia was finishing a full possession of her, it is unclear if Edea herself is a qualified diplomat, or if the role was solely Ultimecia's. Edea speaks in a very sophisticated and poetic manner, implying she is a staunch creative, though to what actual expressions has gone undocumented. Edea's White SeeDs, and Galbadia garden's strict militaristic emphasis, would seem to imply Edea is particularly well versed in marshal disciplines.

Ultimecia's possession method is not something that can be subverted, even with a strong-will and knowledge, such as Edea's, leaving the sorceresses helpless in her own body, despite her various mental skills. Edea states she was fully aware of what was going on while she was possessed, but unable to exert any-control over her own body. Though Ultimecia was in her body, neither Edea, nor Ultimecia have any knowledge of the other's inner thoughts - Edea, only gleaning a few facts from Ultimecia, verbally muttering to herself, such as "Time Compression" and Ultimecia utterly in the dark on the nature of SeeD, despite Edea founding it. Edea can observe her own senses, and think internally while possessed, but has absolutely no method to exert any control over her body for such periods - her brain activity completely shut off from her nerves, save picking up sensory information.

An artwork of Edea Kramer. 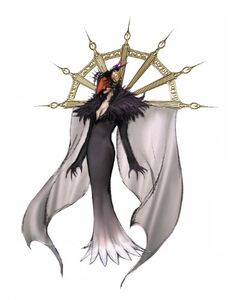 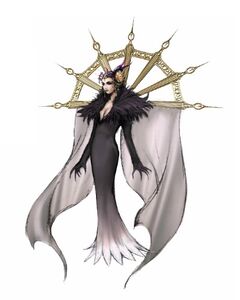 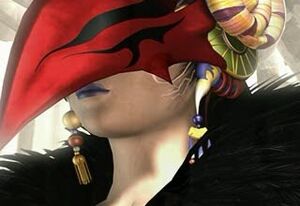 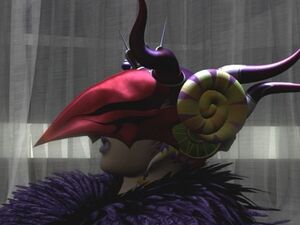 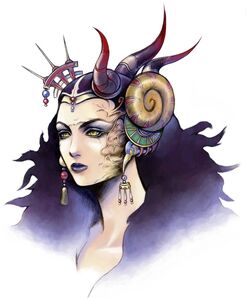 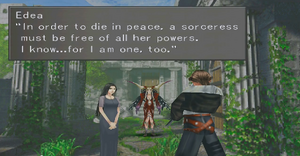 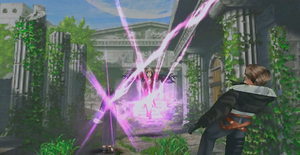 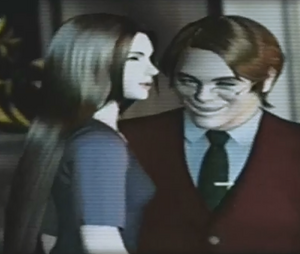 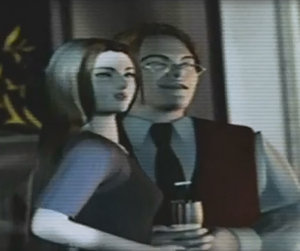 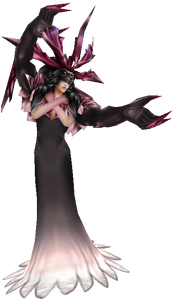 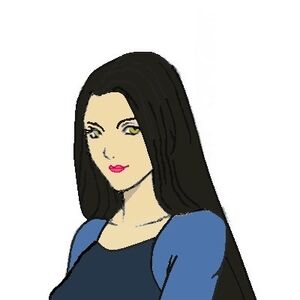 A close-up view of Edea Kramer. 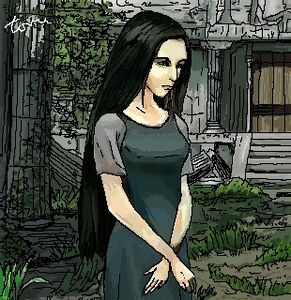 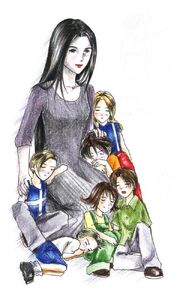 The Matron
Add a photo to this gallery

Retrieved from "https://hero.fandom.com/wiki/Edea_Kramer?oldid=2105240"
Community content is available under CC-BY-SA unless otherwise noted.