Barbie in A Christmas Carol

Redeemed Narcissist
Eden Starling is the main protagonist and false antagonist in the 2008 animated film, Barbie in A Christmas Carol.

Eden is a famous singer in the Victorian era of England. However, Eden is very cruel and mean to her employees and never in a good spirit. After her performance singing Oh Christmas Tree, she was furious finding that her tea and crumpets are not there, causing her to be enraged. Her friend, Catherine, supposedly served her, but she was busy making clothes.

Eden is always in a bitter mood because she was raised by her aunt, who would always tell her: "In a selfish world, the selfish succeed." Eden was so mad at Catherine and her other workers that she made them work on Christmas.

That night Eden was visited by the ghost of her aunt, Marie. She is chained bound with mirrors connected to it because of what she's done while she was alive and tells her to change. Eden soon was visited by three spirits, each showing her the past, present, and future. It firstly shows Eden's dull past, living with her Aunt. She and Catherine were great friends. Aunt Marie didn't let Eden to go to the Beadnell's house for Christmas, saying that she has to rehearse more if she wants to be a star. However, while Aunt Marie is sleeping, Eden manages to escape and go to the Beadnell's house to celebrate. Later, Aunt Marie came to the Beadnell's house looking for Eden. In that moment Eden told the Ghost of Christmas Past to send her in her room, because the outcome was too painful to see and explained that she lost her Christmas spirit because of that painful Christmas she had because of her aunt.

When Eden was shown the present by Christmas Present, she sees her employees, even Catherine, teasing her behind her back. She was furious, but slowly had a change of heart when she sees the orphanage Catherine helps. Overhearing a conversation about the orphanage closing due to lack of funding, Eden shows concern for the orphans' future and wants to know if they'll survive. However, the ghost repeated her cruel words which offended her and she demands they leave at once.

When Christmas Future shows Eden her terrible future with her being poor and Catherine as a cruel fashion designer, she decides to change her future and be a lot nicer to her workers. That morning, she rushes to find presents for her workers. When they arrive, she greets them and lets them take the rest of the holidays off and her workers were delighted to see Eden had changed and Catherine was happy to see that her friend has her Christmas spirit back.

Initially, Eden was shown to be rude, selfish, bad-tempered, bratty, bossy and reluctant to change. But as the plot thickens, her attitude is proved justifiable. As the kid, Eden wasn't so selfish or rude. She was very friendly and good person. But because of her strict and egoistic aunt, Marie who never lets Eden to be free and who always said that "In a selfish world, the selfish succeed", she grew up with confidence in the words of her aunt.

In the possible future shown by the Spirit of Christmas Future, penniless and jobless Eden was a lot more timid and modest, a life of hardship and poverty having humbled her greatly.

But after the three spirits visit her, she repents her disposition and changes into a kind, lovable and genuine person - her true self.

Eden has light skin, blonde hair and green eyes. She has a beauty mark under her right eye. Her hair is in ringlets.

When performing, she wore a green gown with gold detailing. She wears pearl necklace with green diamonds and long-white gloves. To sleep, she wears long-purple sleeping gown with a gray mask. On Christmas day, she wearing a red and gold dress with long-white gloves and red hood with white fur. 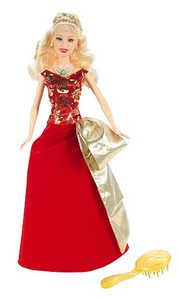 Eden and Christmas Past 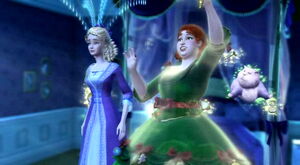 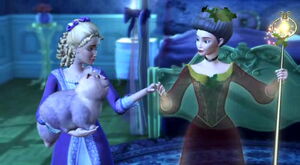 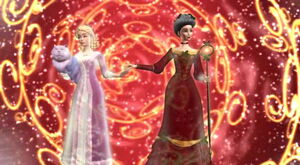 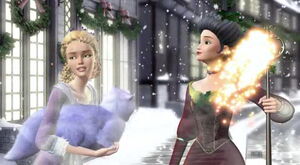 Eden begging for a chance to change after seeing how horrible her future will become.
Add a photo to this gallery

Retrieved from "https://hero.fandom.com/wiki/Eden_Starling?oldid=2055381"
Community content is available under CC-BY-SA unless otherwise noted.