In the novel, Edmond Dantès starts out as an honest and somewhat naive Marseillais merchant sailor whose future looks secure. In 1815, while returning home from a voyage, the captain of the ship Dantès serves on as the first mate dies, resulting in Dantès taking command. Upon returning home, he's promised by his patron, Pierre Morrel, the captain's position for his exemplary performance. The happy Dantès returns to his old father and beloved, a young Catalan woman named Mercédès Herrera, and they decide to be married immediately.

On the night of the nuptial feast, however, Dantès is suddenly arrested. The reason for this is because he's been framed as a supporter of Napoleon Bonaparte. During the voyage, Dantès visited Elba to deliver a letter as per his Bonapartist captain's last wish, and was then given a task to deliver another letter to Paris. Danglars, an envious crewmate, knew of this letter and wrote an anonymous note which was then delivered by Fernand Mondego, Mercédès's cousin who has unrequired feelings toward her. Dantès is questioned by the deputy crown prosecutor, Gérard de Villefort, who can see that the young sailor is innocent. Unfortunately, the letter Dantès was supposed to deliver is addressed to Mr. Noirtier, Villefort's father who's a staunch Bonapartist. Out of fear for his own career, Villefort destroys the letter and sentences Dantès to imprisonment in the dreaded Chateau d'If.

Dantès spends the following fourteen years in Chateau d'If's solitary confinement, initially ignorant of the reasons for his imprisonment and hopeful for being released. However, as the years pass by, he becomes depressed and suicidal. When six years have passed, he tries to dig his way out of his dungeon and meets another digging isolated prisoner, Abbé Faria, an old Italian priest and sage who's been imprisoned since 1811. The two men become close friends, and as they spend the following years trying to dig an escape tunnel, the learned priest teaches Dantès all he knows about a variety of subjects and helps him uncover the reasons behind his imprisonment.

In the fourteenth year, Abbé Faria dies out of sickness and reveals Dantès the existence of a secret great treasure, hidden on the island of Monte Cristo. By impersonating as his dead friends' body, Dantès escapes by being thrown into the sea. He's rescued by a smuggling ship, and he spends some time recovering as a crewmate. Eventually he journeys to the island of Monte Cristo and finds the treasure, becoming very wealthy. He uses this wealth to create for himself connections and various identities - especially that of the Count of Monte Cristo - in order to have his revenge on his betrayers - Danglars, who's become a baron and a wealthy banker; Villefort, who's become the royal prosecutor; and Fernand, who's become a count and Mercédès's husband. In 1838, twenty-three years since his imprisonment, he puts in motion his elaborate plans to have his revenge.

Edmond Dantès portrayed by Gérard Depardieu in the 1998 miniseries 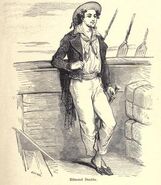 Edmond Dantès portrayed by Jacques Weber in the 1997 miniseries
Add a photo to this gallery
Retrieved from "https://hero.fandom.com/wiki/Edmond_Dant%C3%A8s?oldid=1944680"
Community content is available under CC-BY-SA unless otherwise noted.