Auntie Edna (in the sequel)

To make only the best in superhero outfits

Edna "E" Mode is a supporting character in The Incredibles and its sequel Incredibles 2. She is Mr. Incredible's mentor and the costume designer for the superhero community in the franchise, though she refuses to include capes to the costumes because of the number of superheroes that were killed when their capes were caught in assorted gadgets like airplane turbines and elevators. She has a little bit of screen-time in the first film, but more screen-time in the second film.

Edna is a half-Japanese, half-German, short fashion designer and auteur. She is known for calling everyone "Dahling" ("darling").

She was voiced by the film's director Brad Bird in English, and by the late Tetsuo Gotō in Japanese.

Edna has created custom-made original outfits for superheroes since the "glory days", saying that she used to design for gods. It is apparent that she feels infinitely superior to all other designers in the world and shows much disregard toward runway boutiques and modern fashion models, claiming that she had gone to Milan to design clothing for the supermodels, and called them "spoiled, stupid little stick-figures with poofy lips who think only about themselves".

Edna is called out of a 15-year period of imposed retirement to repair damage to Bob's supersuit, and ends up producing a series of completely new, matching outfits for the entire Parr family. For safety reasons, she is very insistent on not including capes in the new design, mainly because any superhero who had a cape ended up killed or trapped. This proves to be a foreshadowing as to the final fate of the villain.

Later, when Bob's wife Helen discovers that a rip of his super-suit has been mended, she suspects Edna. She contacts Edna, wanting to talk about the suit, and Edna insists that she come see her almost immediately. Helen goes to Edna's mansion, where Edna reveals that she has designed super-suits for the entire family, adding that each suit is equipped with a homing device. As Helen desperately wants to find out her husband's whereabouts, Edna hands her a device that gives her his exact location. When Helen finds out that Bob is on a faraway island, she breaks down in tears, in fear that she is losing the man she loves. Edna then whacks Helen on her head with a newspaper, demanding that she pull herself together, go confront the troubles he is facing, fight, and win, now that she knows where he is. 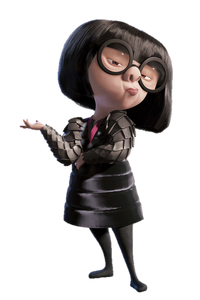 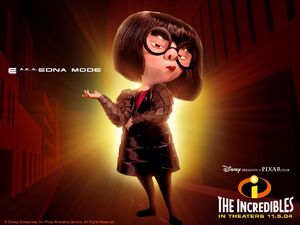 Edna Mode in a promotional image for The Incredibles 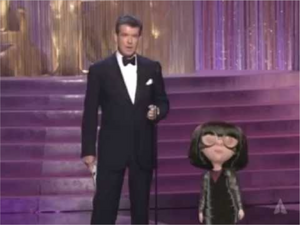 Edna Mode and Pierce Brosnan at the Oscars 2005.