Get out of the Nemeton Abbey alive
Help Koudelka and James, Bash James' face in

Edward Plunkett is one of the three main characters of the video game Koudelka, the game that would start the Shadow Hearts series. He is enthusiastically hedonistic but also maintains deeply religious outlook on life. Edward meets Koudelka Iasant and later James O' Flaherty in the Nementon Monastery but unlike his friends Edward did not come with foreknowledge of the monastery's supernatural nature but was rather just lured there by a rumor that it was hosting a non-stop brothel.

Edward James Plunkett was born into a wealthy English family and groomed for an aristocratic future, Edward dropped out of his university though as a teenager wishing to see the world instead of leading a secure and as he saw it, boring predestined life of abject luxury. Edward roamed London for years living a completely hedonistic life-style passing from brothel to brothel and living a near care free life. One day Edward heard about a wealthy land owner who had converted a monastery to a home and hosted burlesque parties there every day, inviting hookers, rogues and smugglers there to ply their wares for the parties. The Monastery located in Wales and was known as the Nementon Monastery, Edward quickly found himself headed to the Nementon Monastery to take advantage of the eccentrically charitable land owner and his penchant for wild parties. When Edward arrived at night to find the Monastery quiet and seemingly abandon at first. Edward began to think the rumors of wild parties were false while attempting to find someone on the grounds. Before long though Edward was attacked by what appeared to be a werewolf. Edward was badly mauled by managed to wound the beast with a few gun shots. The beast ran off but Edward could tell it was still near by waiting for him to lose consciousness so i could finish him off. Too weak to stand all Edward could do was try to keep himself awake as long as possible and keep his hand on his gun.

At the start of the game the witch Koudelka is called to the monastery by the cries of an unknown spirit she sensed was in a state of unrest. In the initial ruins of the outer building she found a man battered and broken sitting alone in a room with a gun in his hands, Edward. Edward laughed off the notion of his last sight being that of a beautiful and mysterious woman as he held out his gun. Koudelka at first mistakes the sentiment as Edward threatening to kill her, a notion she found less than threatening in Edward's current condition. Edward tells her he is in fact aiming for the monster behind her. Koudelka quickly turns and gets out of the way avoiding the werewolf's attacks and Edward quickly throws her his gun. After the battle Edward congratulates Koudelka on kiling the werewolf and asks her to prey for him when he dies. Koudelka was appalled by the concept of actually preying for the random man but said that since he did warn her about the monster and tried to save her she felt she owed him, at which point Koudelka used her powers to heal Edward's injuries. Edward was amazed and asked if Koudelka was an angel. Koudelka was annoyed by the implication and stated she was in fact a witch not an angel. When Koudelka asked what had brought Edward to the monastery. Edward told Koudelka how he had heard that the monastery was the site of wild parties and sex orgies and that he had come to put the fear of god into the heathen holding such un-Christian soirée. Edward was a poor liar though and Koudelka was easily able to determine the real reason Edward had come to the supposed brothel.

Koudelka had come to uncover the strange presence haunting the place and Edward insisted on joining, partly as gratitude for Koudelka's help, partly because his interest about the monastery was peaked and partly because he found himself enamored by the mysterious witch. Once making their way a little further in Koudelka and Edward found a kindly married couple who managed the monastery for their master as groundskeepers, Ogden and Bessy Hartman. Bessy offered the two a meal while Ogden shared some of his spare bullets to help put Edward at ease. The two said that they had not heard from the owner for some time and recently monsters had started to gather around the monastery walls and in the deeper parts of the structure that predated the more residential renovated areas. Both listened intently but Koudelka re-framed from eating while Ogden and Bessy explained the situation, unlike Edward. After supper Koudelka and Edward met in the pantry to talk, Edward was still hungry not having eaten for days and Koudelka was concerned as to why Ogden and Bessy were lying. When Edward asked what made her think the sweet old couple were lying and why Koudelka had wasted her food Koudleka causally mentioned that if it had not been poisoned she would have eaten some. Edward all of a sudden felt sick and asked how Koudelka knew the food was poisoned, to which Koudleka causally replied that she smelled an herb in the soup she recognized as a powerful paralytic. Edward quickly began to feel the affects doubling over in pain while Koudelka looked into the fire, contemplating what Ogden and Bessy were trying to hide. Before the poison took full effect though Koudelka agreed to cure him with her powers but told him once she did he could not go looking for a fight with Ogden and Bessy and that it was better the two thought they were dead so they could look around.

Once Edward was healed the two made their way into back room which lead out to an herb garden, there they found an unconscious man in priest's garb about to be eaten by a large man-eating plant creature. Koudelka and Edward fought off the creature and soon after it was defeated the man in the garden woke up. He introduced himself as Father James O' Flaherty and said he was there on a mission from God to stop the source of the unholy creatures haunting the monastery walls. James was deliberately vague about details as he did not trust the two assuming them to be rogues or bandits who had broken into the monastery grounds. Both Koudelka and Edward were put -off by the self-righteous, vaguely motivated priest and he them but James decided against his better judgment it was best if all three stuck together in the dangerous grounds. Since all three seemed to want to find answers Koudelka let James join them despite Edwards objections. Koudelka Edward and James spend the remainder of the game trying to track down the dark secrets of the Nemeton Monastery despite their differences.

Edward claims to believe in God when confronted about it by James but just feels God is less stringently strict than James would have them believe. Even with his religious outlook on life, Edward believes there is no harm in a life of debauchery and celebration as long as at the end of the day one listens to their conscience. Though Edward finds out early on that Koudelka is a pagan he seems not to care despite his religious views, believing that being a good person is all that counts, not specifically what god or gods one believes in; On the other-hand Edward despises James and anyone else who would pass judgment on him and his lifestyle in the name of God. On more than one occasion Edward has threatened to bash Jame's face in for talking down to him and Koudelka. While Edward can be focused towards any party role the player likes his lack of any starting magic, high strength, vitality and skill with weapons usually makes him the tank character in battle for most players. Edward handles weapons well and can take a hit much easier than either James or Koudelka. 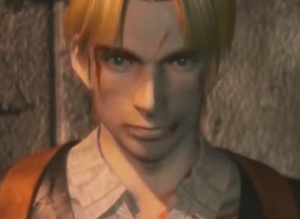 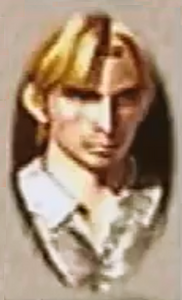 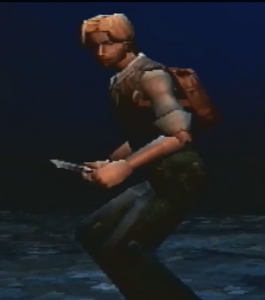 Edward in battle
Add a photo to this gallery

Retrieved from "https://hero.fandom.com/wiki/Edward_Plunkett?oldid=1839200"
Community content is available under CC-BY-SA unless otherwise noted.