Protect His Family From The Empire (Failed)

Eeth Koth is a male Zabrak Jedi master and a member of the High Jedi council during the final years of the Old Republic. Koth is an Iridonian the horned species is known for their determination and mental discipline, which allows them to tolerate great physical suffering.

Koth started his Jedi training at the unusually late age of four years, making him more receptive than his fellow Council members. Koth was seated on the Council when Master Qui-Gon Jinn brought information regarding the return of the Sith which startled the Council and Koth shared a concerned look with Depa Billaba. Qui-Gon also discussed his discovery of a young boy named Anakin Skywalker believed to be a destined Chosen One which the Council agreed to test the boy.

When reports came in that Jinn had been slain on Naboo by the Sith Lord, Koth and a majority of the Council traveled to the world for his funeral and allowed Jinn's apprentice Obi-Wan Kenobi to train the boy. Koth was present on Coruscant when Obi-Wan and his apprentice Anakin reported the failed assassination attempt against Senator Padme Amidala. Later the Council discovered Kenobi had been on the planet Geonosis and was captured by the Separatist along with his apprentice and the Senator. Master Mace Windu formed a Jedi task force which Koth joined and fought with his fellow Jedi in the battle arena in what became the opening battle of the Clone Wars.

Later during the Clone Wars, the Council discussed the growing concern of the Separatists and the need for more Jedi Knights. Master Kenobi asked for his apprentice to forgo the Trials and be promoted to Knighthood, causing some Council members distrust, including Koth. Master Yoda trusted the decision and allowed Anakin to become a Jedi Knight.

In Star Wars: The Clone Wars episode, "Grievous Intrigue", He was taken prisoner by General Grievous the cyborg general as his Jedi hostage for the Republic to the Planet Saleucami. The Council wanting to rescue their comrade dispatched Obi-Wan, Anakin, and Adi Gallia to rescue Koth. Gallia engaged Grievous in a lightsaber battle while Anakin rescued Koth while Grievous fled the battle. Gallia returned Koth's lightsaber to him and parted ways with Kenobi and Skywalker as Gallia escorted Koth to a medical ship. 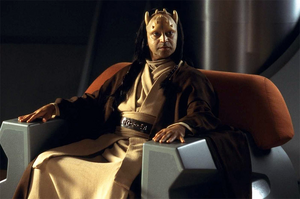 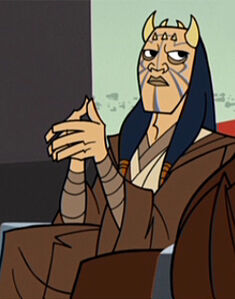