The Trubshaw Baby (by the people of Cheesebridge)

Going to the surface to explore

Save his Boxtroll friends from the evil Archibald Snatcher and The Red Hats (Succeeded).

Eggs is the main protagonist of the 2014 film The Boxtrolls.

He is voiced by Isaac Hempstead Wright, who also portrayed Bran Stark in Game of Thrones.

Eggs is an orphaned boy adopted by a group of monsters known as the Boxtrolls, who are feared by the townsfolk of Cheesebridge but actually harmless tinkers. When the trolls are threatened by a wicked exterminator, Archibald Snatcher, he must defend them with the aid of Winnie, a spirited rich girl.

Eggs lives among the peaceful monsters called the Boxtrolls, cared for by a Boxtroll named Fish. As Eggs grows up, Snatcher captures several Boxtrolls, leaving him distraught. After Lord Portley-Rind's daughter Winnie sees Eggs with two Boxtrolls, Snatcher captures Fish. Eggs sneaks to the surface to find Fish and emerges in an annual fair to commemorate the disappearance of the "Trubshaw Baby" who was allegedly killed by Boxtrolls.

Disgusted by the town's fraudulent portrayal of the creatures, Eggs follows Winnie. After a brief exchange, he asks her for directions to Snatcher's headquarters, located at an abandoned factory, where Eggs saves Fish from danger. They are caught in the escape. Snatcher recognizes Eggs as the Trubshaw Baby and reveals that all the captured Boxtrolls are building him a machine. Winnie, who covertly followed Eggs, overhears this exchange. She then helps Fish and Eggs escape from Snatcher and they take shelter in the Boxtrolls' caves, where Fish explains that Eggs' father had given him to them to protect him from Snatcher. Winnie agrees to help Eggs tell Portley-Rind the truth.

Later on, Eggs tries to confront Portley-Rind, but is confronted by Snatcher (disguised as a woman named "Madame Frou-Frou"). Whilst trying to avoid Snatcher, Eggs inadvertently knocks the cheese wheel into a river. Eggs announces himself to the party as the Trubshaw Baby, but no one believes him, including Portley-Rind, who is too upset about losing the cheese wheel.

Eggs tries to persuade the remaining Boxtrolls to flee for their own safety, but unknowingly demoralizes them. Snatcher digs into the caves and captures them all. Eggs awakens to find his father Herbert Trubshaw a prisoner beside him. He sees the Boxtrolls stacked in a crusher and begs them to leave their boxes and run, but they are seemingly killed by the crusher.

Snatcher drives his machine to Lord Portley-Rind's house, shows him the flattened boxes as proof of the Boxtrolls' extinction, and demands Portley-Rind's white hat in exchange for killing the last Boxtroll, which is actually Eggs disguised. The Boxtrolls, who have escaped from the crusher, free Eggs while Herbert reveals himself, causing Portley-Rind and the citizens to realize that Snatcher lied to them. Eggs and Snatcher are thrown clear and land on the recovered Briehemoth, which triggers Snatcher's cheese allergy and causes him to swell to an enormous size. He seizes Winnie and forces Lord Portley-Rind to give up his hat in exchange for her safety, but after tasting an aged cheese sample, his cheese allergy finally sets off and he explodes into pieces. With Snatcher's plot foiled, the townspeople and Boxtrolls agreed to form a peaceful coexistence with each other, Winnie tells the tale of Snatcher's end to a crowd while Fish and Eggs drive off in one of Herbert's contraptions. 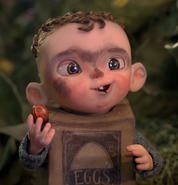 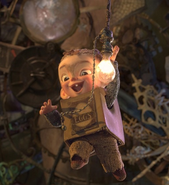 Baby Eggs swinging on a chain 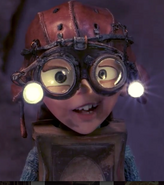 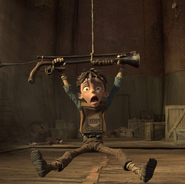 Eggs swinging on a rope 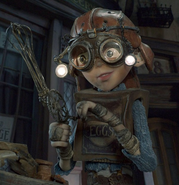 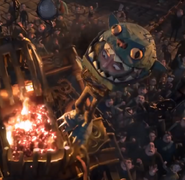 Eggs with the boxtroll clan

Eggs on the Pure Good Wiki.