To stop the Pure Ones

Avian Hero
Eglantine is a Barn Owl who is the youngest child and only daughter of late owls Noctus and Marella, the younger sister of Soren and Kludd (later known as Metal Beak), the aunt of Coryn, Bell, Blythe and Sebastiana, the sister-in-law of Nyra and Pellimore and a supporting character in the Guardians of Ga'Hoole books and the 2010 film Legend of the Guardians: The Owls of Ga'Hoole.

In the film, Eglantine is voiced by Adrienne DaFaria.

Eglantine is born in a tree hollow in the forest of Tyto to Noctus and Marella. She hatched two weeks after her brother Soren and a few weeks after her other brother Kludd. Whilst Soren dotes on Eglantine, Kludd doesn't have much interest in her.

Sometime afterwards, Noctus and Marella are killed by an owl named Metal Beak, the leader of the Pure Ones, who then took Eglantine to the Pure Ones' base to be stone stunned (which involves placing an owl amoungs human bones). Later, Eglantine and several other young owls captured by the Pure Ones were snatched by owls from St. Aggies. However, during a fight with the Pure Ones, Eglantine and the young owls were dropped onto the ground and rescued by the Guardians of Ga'Hoole and brought to the Great Ga'Hoole Tree.

Eglantine is first seen in her family's hollow with Soren, reenacting the battle against Lyze of Kiel and the Pure One's leader Metal Beak whilst Noctus, Marella and annoyed Kludd (who in this film is a separate owl from Metal Beak, whose real name is Surtr) watches on. Soren also tells Eglantine about the Guardians of Ga'Hoole, but Kludd tells him to stop, saying that he will give Eglantine daymares. After having her first pellet, Eglantine is taken by the family's nestsnake Mrs. P to see Soren and Kludd's first pellets. Shortly after this, Soren and Kludd fall from their tree and are captured by Jatt and Jutt to be taken to the Pure One controlled St Aggie's. Eglantine's reaction to her brothers' disappearance is not shown, but it is likely that, like her parents, she was worried about them.

Sometime later, Kludd (now a Pure One soldier) takes Eglantine from the family hollow (possibly whilst Noctus and Marella were out looking for him and Soren) and brings her to St Aggie's, with hopes of recruiting her into the Pure Ones. Eglantine tells Kludd that she misses their parents, but Kludd replies that she's with him now and that the Pure Ones really appreciate them. Eglantine tells Kludd that they should find Soren, but Kludd, having grown to hate his brother, tells her to forget about Soren as he is weak. Eglantine promises not to say anything about what Kludd is doing and wants to go home. Kludd says they will go home tomorrow, before he and the Pure Ones' second-in-command Nyra, moonblinks her, putting her into a trance. Afterwards, Kludd gives Eglantine and another moonblinked owlet to Allomere (a Guardian who is in league with the Pure Ones), who takes them to the Great Ga'Hoole Tree, where Soren (having escaped St Aggie's) is residing.

Whilst the Guardians go to battle the Pure Ones, Soren stays behind to tend to Eglantine and is able to break her free from her trance. Eglantine reveals to Soren about what Kludd did to her and about Allomere's alliance with the Pure Ones.

After the defeat of Metal Beak, Nyra, Kludd and the Pure Ones, Eglantine is last seen with her parents and Mrs. P, welcoming Soren back to the Great Ga'Hoole Tree.

Eglantine in Legend of the Guardians: The Owls of Ga'Hoole

Eglantine with her brothers and parents

Eglantine with Soren and their parents Noctus and Marella and Mrs. P 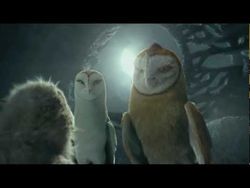 Eglantine about to be moonblinked by Kludd and Nyra

Eglantine, her brothers and their nestsnake Mrs. P