Helping those in need.

His title is pronounced similarly to both "Os," refers to the three O's in the series title which represent the character's transformation items, as well as meaning "multiple kings (王ｓ Ōzu)". The three O's also represent the infinity symbol with an additional circle over the center, stating that Kamen Rider OOO is Over Infinity. His debut was a cameo in the film Kamen Rider W Forever: A to Z/The Gaia Memories of Fate where he fights against the Luna Dopant. Before Eiji Hino, there was a previous Kamen Rider OOO who had fought and sealed the Greeed away. The same original OOO also happens to be his murderer, after the end of Kamen Rider OOO TV series and his last mainline appearance in Kamen Rider Zi-O.

He is portrayed by Shu Watanabe.

He was originally the son of a politician who travels the world with his grandfather, thus growing up in a lavish environment. While in Africa a year prior to the beginning of the series, Eiji attempted to use his fortune to help out a small village. However, his money was used to fund a civil war that cost the life of a little girl Eiji befriended, whose death he was unable to stop, forced to looked on helplessly. Though the Hino family used his sob story to get the people's support, the ordeal peculiarly caused Eiji to lose all selfish desires, resulting him being a vagabond with no permanent job, no home, almost penniless and no life. He became willing to help those in need, often going so far as to risk his life for complete strangers. Eiji's rationale for helping people is if someone reaches their hand out to him and he does not reach back, he will regret it for the rest of his life.

Returning to Japan to allegedly fund more of his world travels, Eiji's latest part-time job at the Kougami Art Museum ends due to the destruction of the museum around him while in a drugged slumber, taking a strange red coin he found as his supposed pay. This causes a disembodied arm to begin to follow him around, demanding the red coin from him which is actually a part of his being. However when attacked by a Yummy, the arm reveals himself as Ankh of the ancient beings known as the Greeed, and the red coin is one of his Core Medals. When Eiji risks his life to rescue him, Ankh gives him two more Core Medals and the OOO Driver as means to transform into Kamen Rider OOO. After destroying the Yummy, Eiji learns more about the Greeed and Medals from Ankh, who originally intends for Eiji to be a tool for gathering Cell Medals for him. However, after the Greeed take the half dead body of Shingo Izumi for his own, Eiji manages to force Ankh into promising him that he can transform to save lives, not just to gather Cell Medals. Feeling guilty for getting Shingo involved, Eiji remains by Ankh's side as the two are joined by Shingo's little sister Hina Izumi.

Soon after facing the Greeed Kazari that Eiji is approached by the Kougami Foundation, and is offered a partnership with them in the fight against the Greeed. In the process, joined by Akira Date, Eiji learns more of the Greeed's desire to become whole and the reason why Ankh is unable to assume his complete form when Ankh(Lost) appears. However, things change when Eiji becomes a host to half of a set of purple Core Medals that react to his lack of selfish desires, the same presumed reason why he is able to use Kamen Rider OOO's powers without any sign of going berserk so far, with dangerous consequences. Though Eiji managed to keep the purple Core Medals under control and with time, even use their powers at will, they are later revealed to be slowly turning him into a Greeed, evident from the fact that he has lost his sense of taste by the time Ankh is absorbed by his other self and Shingo is now well enough to survive on his own. However, Eiji's condition worsens when the freed Ankh, with three of his Core Medals utterly destroyed with Ankh (Lost)'s destruction, forcefully possessed Shingo's body again and turned his back on Eiji. Soon after, Eiji learns from Kousei Kougami, the Foundation's owner, that the only way to counteract the purple Core Medals is to acquire a desire of his own, something he is yet capable of doing as he turns into the dinosaur-like Eiji Greeed (映司グリード Eiji Gurīdo after absorbing two more purple Core Medals forcefully inserted by Maki to have him go on a rampage.

However, it is by then that Eiji remembers that his desire is to have power, although again it is so that he can help others. He later agrees to Kougami's suggestion to absorb all of the Cell Medals in the Kougami Foundation's possession to achieve that desire. However, it does not halt Eiji's Greedification, as he sees the purple Cores as part of his powers and refuse to hand them over to Kougami, continue using them even though they consumes him. During his final battle, he uses all the Cell Medals in his body in a risky attack that fails to destroy Maki. But before Eiji rampages as a Greeed, Ankh gives Eiji his last three Core Medals, disappearing and allowing Eiji to assume Tajadol Combo to defeat Maki, who's destruction create's a black hole destoring Eiji's purple medals and sucking the other Core Medals into it, except Ankh's broken Taka Core. As Eiji falls back to the earth, Ankh appears to him as his disembodied arm, thanking him and saying his farewells, before disappearing into half of the broken Taka Medal that once held his consciousness. Saved by Kamen Rider Birth, he realized that the power that he seeks are the people that he had bonded with, and that he does not have to save people alone. He received the other half of Ankh's Core Medal that Hina found and later leaves Japan and resumes his journey around the world, unaware that a spectral Ankh arm is following him.

In Movie War Mega Max, it is revealed that Eiji is currently working together with Kougami Foundation on their attempt to create new Core Medals in hope of restoring Ankh's Core Medal. As a result, Eiji is helped by Ankh from the future and regains most of his Core Medals while obtaining the Super TaToBa Medals. In Super Hero Taisen, Eiji is revealed to have restored the purple Dinosaur Medals. Helping the Gokaigers, he gives them each a Core Medal from his set that become special Ranger Keys they use to transform the six main combos of Kamen Rider OOO. 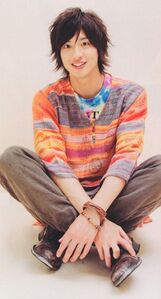 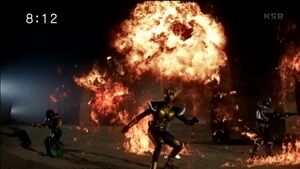 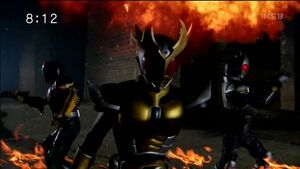 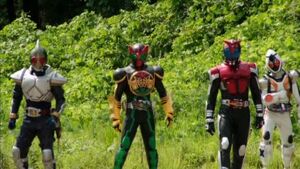 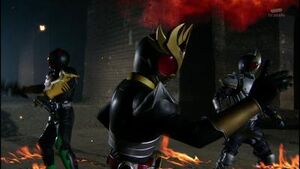 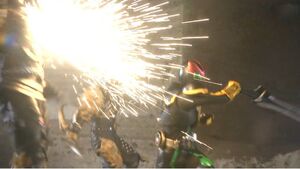 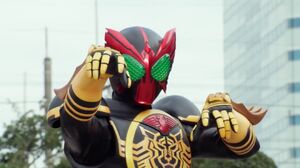 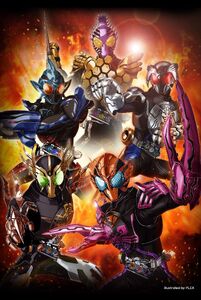