Help Henry to stop the 21 Sacraments.

Eileen Galvin is the deuteragonist of Silent Hill 4: The Room. She lives in Room 303, right next to Henry Townshend and finds herself in Walter's Worlds later in game alongside Henry. Eileen is destined to be the 20th victim of Walter Sullivan with the theme "Mother Reborn". At the end of the first half of the game, Eileen is nearly beaten to death by Walter but is apparently saved by Walter's child self.

Not much is known about Eileen's past life except that she's 23 years old, has lived in North Ashfield when she was a child and has studied archaeology in university. Also, according to her biography, she stands 5'7" (170 cm) tall and weights 150 lbs (68 kg). An ordinary looking girl, Eileen has an outgoing personality which is completely opposite of Henry's. Like many of his neighbors, she only knows Henry by name and face. She's also the only person who actually worries about Henry's disappearance as she constantly tries to check on him either by herself or by calling the superintendent.

She's also a deeply caring person. Her act of giving Walter Sullivan her Shabby Doll when she was a child makes her the only character who has attempted to comfort and console him. This is likely the reason why Walter choose her as his 20th victim.

In Room 302, Henry discovers an incomplete hole that Joseph Schreiber worked on while he was still alive in hopes of escaping. As Henry looks at the wall, Eileen can be frequently watched in her apartment bedroom, Room 303, engaging in numerous activities. The final time she is seen here is just before leaving for a friend's party.

Eileen eventually becomes trapped alongside Henry Townshend in Walter Sullivan's nightmare world and is severely injured by Walter before Henry is able to rescue her. When Henry finally enters Eileen's room, he discovers her on her floor bleeding and beaten to near death with "20/21" carved into her back. Eileen thanks Walter's younger manifestation for intervening with his adult version's assault, tells him to leave, and then passes out.

Slipping back into reality momentarily, Eileen is immediately rushed to St. Jerome's Hospital for emergency treatment, and her arm is cast. Eileen survives the attack, unlike all of Walter's other victims, because the younger version of Walter had intervened in the older Walter's attempt on her life.

When she comes to, Eileen finds herself once again caught in Walter's hellish world, with her real physical body being in the real world St. Jerome's. When Henry finds Eileen, she begins to scream and cry because she is so frightened of seeing a man after what Walter did to her. Eileen is initially frightened, but trusts Henry enough to follow him. With the advantage of having Henry to accompany her throughout the ordeal, Eileen travels through Walter's Otherworlds.

In the Otherworld South Ashfield Heights, Eileen leaves Henry behind to look at Walter Sullivan's sketchbook; she flips through the pages, realizing Walter's sad and abusive childhood. When Henry returns to Eileen, who is becoming possessed, she tells him that she has decided to find Walter herself. Henry and Eileen travel to the superintendent's room, where they find Walter's umbilical cord that Frank Sunderland had kept for decades. Depending if Eileen is possessed, partially possessed, or not possessed at all, she will react differently when Henry finds Walter's umbilical cord:

Entering a portal in Room 302, Henry finds Eileen, possessed, about to walk into a rotating spiked machine because the 21 Sacraments ordered Walter to "separate the Mother Reborn from the flesh". If Eileen received too many injuries during the game, she will walk faster into the machine, and it may be impossible to save her. If Eileen walks into the machine before Henry is able to save her, she will scream a horrific shriek.

Depending on the ending, if Eileen dies, it would be with the "Mother" theme of murder. Also, her contribution to Walter's world is her purse found at the lobby of the Hospital World. In the "Eileen's Death: ending, Henry discovers that Eileen's physical body had passed away in St. Jerome's via news on the radio. In the 21 Sacraments, the radio announces Eileen's death.

If Eileen survives the final battle, Henry decides to visit her in St. Jerome's Hospital. She receives flowers from him, alluding that their relationship has strengthened over their previous recognition of one another. However, she may comment on returning to South Ashfield Heights in the "Mother" ending if Henry didn't exorcise enough haunting, which is bad since the apartment is still possessed. In the better "Escape" ending, Eileen says, "Guess I'll have to find a new place to live, huh?"

Eileen's first speaking appearance suggests that she has an outgoing personality. She is seen preparing for a party, alluding to her extrovert ways and will to enjoy herself. She has a kind and caring personality, and this can be seem numerous times in-game considering her neighbors' friendliness towards her, even from such an unbearable person as Richard Braintree. Eileen seems unnaturally aware of her surroundings and the comings-and-goings of her fellow residents. She is the first to notice that Henry has not left his apartment for some time and called the building's superintendent, Frank Sunderland, asking him to check up on Henry. Later, she questions other residents regarding Henry's background and activities, albeit to no avail.

Eileen also puts the welfare of others before herself. Throughout the game, she voices her sincere compassion for the manifestation of young Walter Sullivan, and even as she lingers on the brink of death, asks the little boy if he found his mother instead of wallowing in her own pain. Her act of giving a homeless Walter Sullivan her doll when she was a child makes her the only one who has ever attempted to comfort and console him. This is in contrast to her fellow neighbors, including Richard Braintree.

She appears to enjoy plush toys, animals presumably, as she has a stuffed toy of the Lakeside Amusement Park's mascot, Robbie the Rabbit, on her bed. This would suggest that like Henry, Eileen has either lived in or visited Silent Hill at some point in her life. She is also very conscientious of the tidiness and cleanliness of her apartment, as she can be seen searching for her broom in one instance. Eileen studied archaeology when she was in college and is able to read Walter's diary, hinting that she is also intellectual and interested in history. 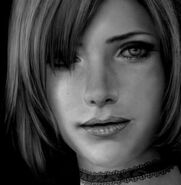 Wallpaper of Eileen in the Building World. 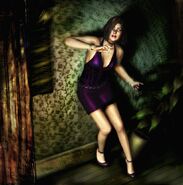 Eileen being assaulted by Walter.

Eileen's nurse costume.
Add a photo to this gallery
Retrieved from "https://hero.fandom.com/wiki/Eileen_Galvin?oldid=1937361"
Community content is available under CC-BY-SA unless otherwise noted.