?
Eileen Roberts is a recurring and now main character from the Cartoon Network series, Regular Show. She is a shy, intelligent mole. She works at the same Coffee Shop as Margaret does. Margaret is better known as her co-worker and one of her really good friends, likely her best friend. She has a secret crush on Rigby, but Rigby does not seem to care about her. She even tried to get Rigby jealous. She first debuted in "Brain Eraser". Minty Lewis provides her voice, who is also the series' storyboarder. Her and rigby do eventually become a couple and they get married and have children during the epilogue of the series finale.

Eileen is a 3'6" mole girl with tan fur from Serbia. However, her appearance is very humanoid, excluding her toes and tail.

She wears red glasses and has two eyelashes on each of her eyes. Without her glasses, her eyes are just two black dots with eyelashes. She has a small, oval shaped light brown tail, and brown hair with some of it tied into a side ponytail. During her debut in "Brain Eraser", her ponytail was on the right side, and in "Do Me a Solid", her ponytail was moved to the left side. She has noticeable front teeth, and they occasionally stick out of her mouth like buck teeth. She has an unhealed scar on her lower middle elbow due to a snow tubing accident when she was a child. In "Brain Eraser", her glasses did not have white in them, and they were narrowed down, showing her pupils. She has two toes on each foot, and is usually barefoot, although around Season 5 she began to wear shoes more often, which most often are red flats.

She wears the same uniform as Margaret at her job at the Coffee Shop; a short sleeved tan top with a light blue collar and cuffs and a tan skirt.

Her most common outfit outside of work, especially in Season 8, is a pink t-shirt and blue jeans with the cuffs rolled up.

In "Do Me a Solid", her attire outside of work was a pink shirt with ruffles around the neck and a blue skirt. This outfit is seen again in "Cruisin' " and "One Pull Up".

In later episodes, in Seasons 3 and 4, she started to wear sweatshirts, one of which is a light burgundy color, which was worn with green shorts, as seen in "Camping Can Be Cool". Another sweatshirt she wore was light purple, and she usually wore blue jeans or a blue denim skirt with it, first seen in "TGI Tuesday". In Tants, she wore a pink sweatshirt with a light blue skirt.

Another outfit she is seen wearing is either a pink or light blue shirt with a white collar and a blue skirt.

In "Return of Mordecai and the Rigbys", she wore...

In "Merry Christmas Mordecai", she wore...

In "Dumped at the Altar", she wore a pink dress, with a light pink top and a darker pink skirt with light pink flowers on it, to Muscle Man and Starla's wedding. Her hair was up in a bun and had small curls of hair over her ears.

In "Just Friends", she wore a "Team Don" t-shirt with her work skirt.

In "Crazy Fake Plan", she wore a grey jacket and blue jeans with her work shirt.

In "Snow Tubing", she wore

In "Rigby Goes to Prom", she wore a sea foam green dress, with a teal bow around the waist, a poofy skirt with a frilly white layer underneath, teal shoes, and white gloves to Rigby's prom. Her hair was in an updo with a bun on top.

In "A Regular Epic Final Battle", she wore...

At the 25 year park reunion, an older Eileen has her hair down under a dark red beret, and she is wearing a pink sweater with a mauve skirt. She also has bags under her eyes. During the time montage, she wears a short pink dress with a purple belt, her ponytail is on top of her head and her bangs are in a messier fashion, and she still has bags under her eyes.

Eileen is a shy, intelligent, and timid mole girl. Minty Lewis describes Eileen's first appearances as coming off "as a pretty big weirdo nerd with major hots for Rigby". However, her character began to develop more in "Camping Can Be Cool", as she is shown to be resourceful when he, Mordecai, Rigby, and Margaret went camping, knowing how to start a fire after they forget the matches, impressing Rigby, along with knowing the name of a constellation Mordecai and Margaret were looking at without even looking up from the video game that she and Rigby were playing. Minty Lewis thinks that viewers have come to see her weirdo neediness "as more charming than off-putting". She can be dorky at times, as she has a rock polisher, and intelligent, as she has shown to get straight As in her college classes. Up until the end of "Snow Tubing", Eileen had a phobia of snow tubing due to getting hurt in a snow tubing accident when she was little. As seen in "I See Turtles", "Crazy Fake Plan", and "Do Me a Solid", she loves sea turtles.

The character of Eileen was pitched and created by the new storyboard artist Minty Lewis. While Lewis was pitching jokes and lines for the character, Regular Show creator J.G. Quintel thought her natural voice was perfect for the character. "Minty’s voice, just her natural voice, was so perfect for that character!" he said. "She [wrote] one of the very early episodes with Eileen in it, and she had some really funny jokes in the way she pitched it. [It was] just the way her voice sounded – she [had] to be that character! We even tried an actor, but it just wasn’t playing funny. [So] we were like, "OK, let’s see if Minty wants to do it." She said yes and it really worked out. It’s a great character and [Minty’s voice] totally fits that character’s personality."  In another interview, Quintel further elaborates: "Oh, [Lewis's voice] is so awkward. But that was just her voice, that's just how she did it. We were like, 'You wanna be Eileen? You gotta be Eileen.' "

Lewis describes getting to be able to voice the character as "pretty crazy".

"'Stuck in an Elevator"

"'Terror Tales of the Park VI"

"'The Key to the Universe" 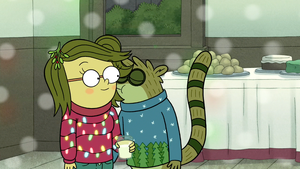 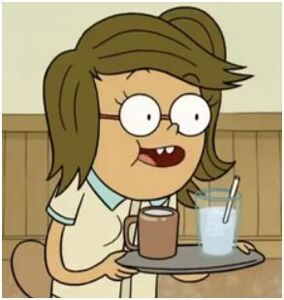 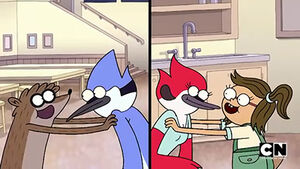 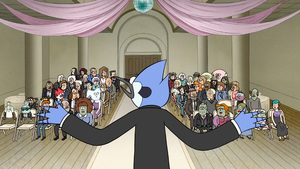 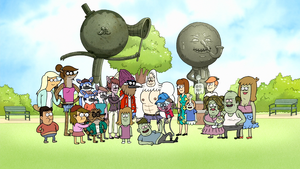 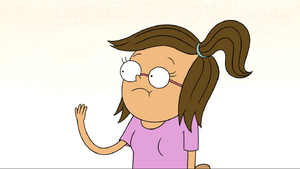