Eileen Roberts is a recurring and now main character from the Cartoon Network series, Regular Show. She is a shy, intelligent mole. She works at the same Coffee Shop as Margaret does. Margaret is better known as her co-worker and one of her really good friends, likely her best friend. She has a secret crush on Rigby, but Rigby does not seem to care about her. She even tried to get Rigby jealous. She first debuted in Brain Eraser. Minty Lewis provides her voice, who is also the series' storyboarder.her and rigby do eventually become a couple and they get married and have children during the epilogue of the series finale. 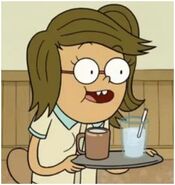 Retrieved from "https://hero.fandom.com/wiki/Eileen_Roberts?oldid=829544"
Community content is available under CC-BY-SA unless otherwise noted.