Princess Eilonwy of Llyr
Girl (once by Taran; also once by herself)

Help her companions find the Black Cauldron and stop the Horned King (succeeded).

Princess Eilonwy of Llyr (simply known as Princess Eilonwy or just Eilonwy) is a princess from the Prydain book series and the tritagonist in the Disney film The Black Cauldron. She is the love interest of Taran.

She was voiced by the late Susan Sheridan, who also voiced Noddy, Tessie Bear, Dinah Doll, Martha Monkey, and many other characters in the United Kingdom dubbed version of the 1992 series Noddy's Toyland Adventures.

Eilonwy is a slender and beautiful young girl with light skin, long blonde hair, and blue eyes. She wears black shoes, a white petticoat, a pink calf-length skirt with a red and dark purple blouse and long white sleeves.

In the film, the Horned King kidnaps her in hopes that her magic bauble could find the Black Cauldron. She and Taran first meet in the lower ruins under the Horned King's castle (once the home of King Rhitta). There, the two come across the mystic sword, Dyrnwyn, and free Fflewddur Fflam from his imprisonment. The group of friends later travel to the realm of the Fair Folk (thanks to Gurgi who didn't lie to Taran and the gang) and reunite with the pig Hen Wen.

The king of the Fair Folk sends Doli with them as an escort to the Marshes of Morva to retrieve the Cauldron. After they receive the Cauldron by trading away Dyrnwyn, they are captured again by the Horned King who then unleases the Cauldron Born. After Gurgi sacrifices himself into the Cauldron, the friends trade the Cauldron back to the Witches of Morva in exchange for Gurgi back. The bargian is granted, and Eilonwy and Taran end up kissing each other. 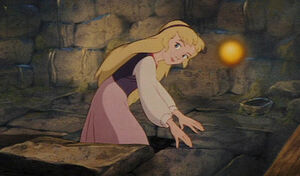