to help Fagin make money, to help Oliver find a new home and to save Jenny from Sykes (all succeeded).

Supporter
Inept
Einstein is a Great Dane and a character from Disney's Oliver & Company. Einstein is a member of Fagin's dog-gang.

He is voiced by the late Richard Muligan.

Einstein is a slender gray Great Dane with a black nose, short ears, dark gray spots on each leg, and long tail. Like all Great Danes, he is the largest of all the dogs in the movie, including his enemies: Roscoe and DeSoto.

Despite his name, Einstein is actually clueless. Likewise, he is more of a pacifist when it comes to a violent fight due to his friendly nature, lack of intelligence, and age as shown when he seems reluctant to fight Roscoe even after telling him to pick on someone his own size. Nevertheless, such traits don't prevent him from being very protective of his friends especially, Tito and Oliver.

In a barge, Einstein, with a broken tennis racket in his mouth, is first seen along with Rita sleeping in their own respective sleeping quarters while Francis is busy watching T.V. and Tito is listening to some music until Tito deliberately wakes Einstein up. Later, as Francis and Tito have a conversation, Einstein joins in and shows them the broken tennis racket he intends to add within a collection of "loot" in a box for his owner, Fagin. Einstein naively takes Francis seriously when the latter sarcastically congratulates him and suggests that all they need now is the court and net before Tito further states that what they need is some good quality stuff while showing them the wallet, which eventually leads to an argument between Francis and Tito when the former insults his pride. Then, Rita wakes up, silences Tito and Francis, and checks out the "loot" while deducing that their owner is not going to be too happy about this when he returns. When Rita asks Francis if he got the food, Einstein and the others become more upset and disappointed when they learn that Francis had actually forgotten the fact that it was his turn to get the food today.

Luckily, their leader, Dodger arrives just in time to cheer them up with his own stolen stash of food for the day: hot dogs. While enjoying their dinner, they ask Dodger to tell them how he did it. At first, Dodger describes every event that occurred during the day until he begins to exaggerate when he mentions a "monster" in his story, which begins to frighten Einstein and the others. But then, everyone becomes even more scared, panics, and each one tries to find a place to hide when something covered in cloth suddenly falls and crashes into their home right in front of them; thinking it's the "monster" from Dodger's story. Wondering what it is, Tito approaches to investigate until a mysterious paw tears through the cloth and accidentally scratches him on the nose. Naively thinking it's an "alien", Tito panics and flees in terror until it is revealed to be in fact, a cat named Oliver as pointed out by Rita to everyone when she sees the result for herself.

Having learned half of the truth, the gang except Dodger surrounds and interrogates Oliver. After Rita silences Tito with a kick when the latter naively thinks that Oliver is lying when he explains that he followed Dodger, Francis asks Oliver why would he follow Dodger, to which Einstein wonders the same thing as well. After Oliver answers Francis and Einstein's questions and Tito, thinking that Oliver is a spy, insists that they eat him instead, Oliver further reveals the truth about his involvement in Dodger's sausage theft and with Dodger to respectfully back him up when he fully admits that the former did in fact, help him in his latest scheme, Einstein and the others begin to develop respect for the kitten. 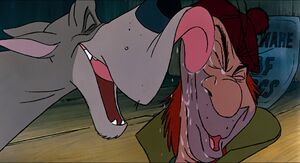 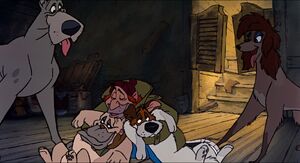 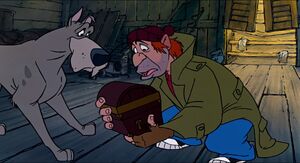 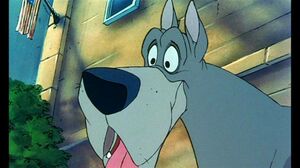 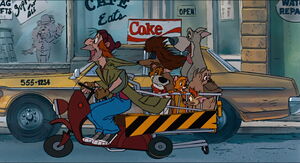 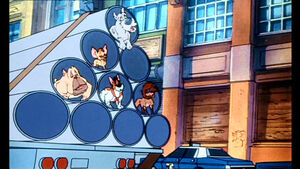 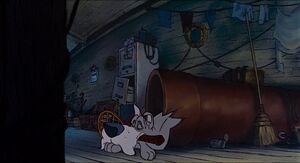 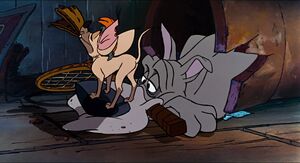 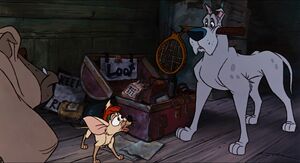 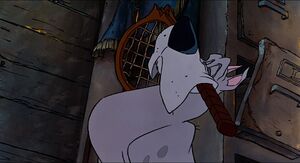 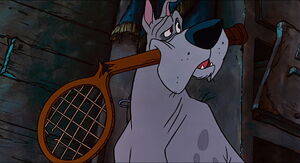 "You think this place is big enough?" 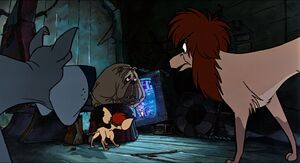 Einstein upset when Francis forgot to get some food. 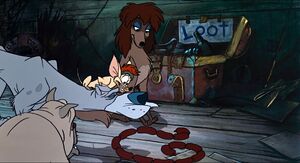 Einstein and the gang having their dinner served by Dodger.