No information
Eirika, is the main protagonist of Fire Emblem: The Sacred Stones. She is the princess of Renais who is the twin sister of Ephraim and the only daughter of King Fado of Renais.

When Renais is attacked by the forces of Grado, King Fado makes his daughter Eirika leave the castle with his trusted knight, Seth, on her side. When Eirika and Seth leave the castle, they encounter Valter, one of Grado's generals. Seth fights against Valter in order to protect Eirika, but he gets hurts in the process. As the battle begins, Seth grabs Eirika and both head on to Frelia.

Eirika makes an appearance in Awakening as a DLC/SpotPass unit.

Eirika is a playable unit in the gacha mobile game, Fire Emblem Heroes. She was added to the game alongside her brother Ephraim on February 15th, 2017.

Eirika in The Sacred Stones 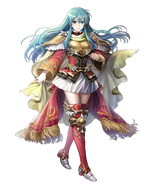 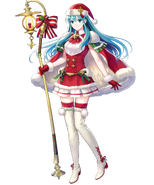 Add a photo to this gallery
Retrieved from "https://hero.fandom.com/wiki/Eirika?oldid=1729575"
Community content is available under CC-BY-SA unless otherwise noted.