The Boy Who Shattered Time

Ekko, also known as The Boy Who Shattered Time, is a playable character in the 2009 fantasy MOBA video game League of Legends and one of the tritagonists in its 2021 Netflix animated spin-off prequel series Arcane.

He is a teenage Zaunite prodigy who believed that his hometown had potential, so he led his fellow Zaunite youth to a rebellious life while travelling all over the city. He found a hextech crystal and experimented with it, and unwittingly discovered how to control time. Harnessing the crystal into time-travel technology, Ekko rewinds time to gain an advantage in any situation, with the hopes he will achieve his goal of unlocking Zaun's future.

The 125th champion added to the game, Ekko was released on May 28th, 2015. He is commonly played in the middle lane or as a jungler.

Ekko was born in Zaun as a young genius who could invent simple machines before he could crawl. His parents wished for a good future for their son, and believed Zaun would be a hindrance to his growth while the city of Piltover had more potential. He grew up seeing them toil endlessly while the Piltovan buyers scoffed at them, only caring about profit. They told Ekko it would be worth it to rise to the city above, but he took a bigger interest in Zaun. Beyond Zaun's flaws, he saw their industry, resilience and resourcefulness, and that it flourished while others would have perished, so he grew up making inventions which would innovate Zaun. Along the way, Ekko befriended kids his age who shared his determination, dubbing themselves the Lost Children of Zaun. They ventured across the city, rebellious and listening to no-one.

One day, Ekko found a broken hextech crystal, which he heard had the potential to change the world. He tried to find more pieces, but the incoming enforcers forced him to flee. Ekko tried to experiment with the crystal, but it exploded in front of him and caused him to find several versions of him from parallel timelines, much to all of their shock. They cooperated to secure the spatial anomaly he had created, and afterward he invented a device that allowed him to control time to his will.

Later, Ekko's friends climbed an old clock tower to vandalize it with caricatures of two famed Piltovans, but one of them ended up falling off the tower to his death. Ekko activated his device and tried to save his friend, and after several failed attempts he was eventually successful in saving him. The others believed that he had superhuman reflexes, but he told them that his hextech crystal gave him the means to travel through time and swore them to secrecy. Instead, they became more daring and foolish, knowing that Ekko had the means to save them.

Ekko’s time-bending antics have made him a person of interest to some of Zaun and Piltover’s most inventive, most powerful, and most dangerous individuals. But his only interest is in his friends, his family, and his city. He dreams of the day when his hometown rises up to dwarf the so-called City of Progress, when Piltover’s golden veneer will be overshadowed by the towering ingenuity and relentless spunk of a Zaun born not from generations of privilege, but from sheer daring. He may not have a plan yet, but he’s got all the time in the world.

After all, if Ekko’s Z-Drive can change the past, how hard can it be to change the future?

Ekko as he appears in Legends of Runeterra.

Ekko's levelled up form in Legends of Runeterra.

Ekko as he appears in Arcane.

A poster of Ekko. 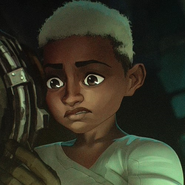