Heroes Wiki
Register
Don't have an account?
Sign In
Advertisement
in: Articles under construction, Article stubs, Anthropomorphic,
and 24 more

El Chupacabra is the tritagonist in the movie, Planes. He likes singing and dancing. He has a crush on Rochelle.

He is voiced by Carlos Alazraqui.

The intensely charming El Chupacabra is a legend in Mexico (just ask him). Powered by his passion for racing (not to mention the elusive Rochelle), this caped Casanova is anything but low-key—his booming voice and charismatic presence are as big as his oversized engine. His cohorts aren’t really sure what is truth and what is delusion when it comes to El Chu, but one thing is beyond doubt: he races with a whole lot of heart and more dramatic flair than is recommended at high altitude

Having been a star on television, a singer, and a novelist of romance, El Chupacabra gets interested in the world of racing, and hearing about the Wings Around the Globe, he goes to qualify, successfully being selected. He is also containing much excitement, believing that even his fans will be watching him, but when he introduces himself in the pit row in New York City, he finds that no one is applauding him, and considers that his fellow racers are not familiar with him. However, one plane does respond, knowing that the name "El Chupacabra" is used for a legendary monster in North America that siphons fuel. Awkwardly, El Chu declines, ensuring that it is only a stage name he has used in his career, and that he has been doing indoor racing around his home country. However, one of the other racers, Bulldog, makes fun of his name, causing El Chu to threaten him by showing his cape, before he heads off feeling proud of himself. Immediately, the newest racer in the Wings Around the Globe, Dusty Crophopper, meets up with him, expressing that he saw him on television the previous year. Flattered, El Chu promises Dusty that both of them will have their own adventures in their first race involving them traveling around the world. At the start line the following day, El Chu is trying to concentrate, along with advising Dusty to do the same thing, but he straight away sees a female French-Canadian plane called Rochelle, whom he starts to fall in love with.

In the first leg, which only stops in Iceland, El Chu makes his way through to finish somewhere in the top eight. While in the country, El Chu attempts to get a chat with Rochelle, but it does not have a good end, as Rochelle is insulted by his words and orders him to buzz off, though he still feels charmed. Meanwhile, his friend Dusty finished in last place, after flying so close to the sea that he got icicles on his bodywork. The second leg occurs the next day, where the racers have to race to Germany. El Chu does his best to move through the field, finishing second behind three-time champion Ripslinger, just as they hear the report of a mayday, where Bulldog is out of control with oil blocking his view. Fortunately, Dusty deliberately guides Bulldog to safety, although he finishes last once again. While El Chu is glad that Bulldog is safe, he feels sorry for Dusty. In the bar, they both meet an aerocar, who introduces himself as Franz, known as Von Fliegenhozen in plane mode, having become Dusty's first fan, and makes advice about having Dusty remove his crop sprayer, since he is a crop duster. Admittedly, El Chu agrees, knowing that it will improve Dusty's performance, and they are all right, as it puts Dusty into the top eight in the third leg that ends in India, while El Chu finishes fourth.

El Chupacabra was meant to make a cameo, however this was deleted 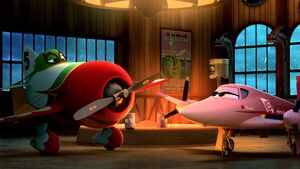 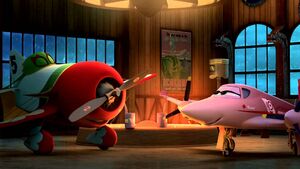 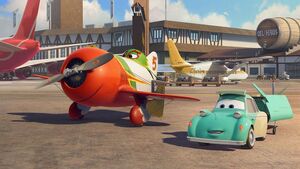