Trying to control his powers.

Moving up the ranks of gangs.
Spending time with his family.
Fighting with the Suicide Squad.

To remain in prison and never hurt anyone else again (failed).
To help the Suicide Squad defeat the Enchantress (succeeded).

Chato Santana, also known as El Diablo, is a Metahuman criminal of Hispanic descent and a member of Task Force X. While initially reluctant to use his pyrokinetic powers out of guilt and fear, he would ultimately sacrifice his life to defeat Incubus and save the world from Enchantress. He is one of the main characters of the 2016 film Suicide Squad.

He was portrayed by Jay Hernandez.

Chato Santana was born on June 3, 1981, in Boyle Heights, Los Angeles, California, into a family of Catholic immigrants from Mexico, and spent most of his childhood in the watchful custody of his grandmother. As the pyrokinetic powers he was born with slowly developed in strength with his age, he struggled to hide these abilities and curbed the temptation to use them growing up. But, this eventually led Santana to weaponize them to his advantage and draw him into getting involved in gang activity at age 17, moving up the ranks by stealing cars, dealing drugs and selling handguns. Becoming known as "El Diablo" on the streets, he was suspected, although never charged, with the murder of fifteen men in East Los Angeles. He thus realized that this might spike his dangerous abilities further and adjusted to the life of a family man, marrying a woman named Grace and fathering a son and daughter with her.

One evening, however, Grace came to discover her husband's criminal activities by finding a stash of money and a pair of pistols in their closet and confronted him about them. When the married couple argued with her threatening to take their children away to her mother's, El Diablo lost his temper and had a hard time controlling his pyrokinesis. This resulted in him setting their house ablaze, unwillingly killing both Grace and their two children. Devastated, a remorseful El Diablo handed himself over to police custody voluntarily and was subsequently charged to life incarceration in federal prison. Upon entering, he was jumped by several other inmates in the recreational area, prompting him to freak out and torch the entire area, killing those nearby. Deemed far too dangerous for a federal prison, the fiery homeboy was subsequently transferred to Belle Reve, where he was put inside a container capable of dousing the fire.

At Belle Reve, El Diablo was approached by Amanda Waller and Rick Flag who showed him footage of him killing several inmates. El Diablo denied being the person in the footage saying that person is dead, frustrating Waller. Flag tried to talk to El Diablo but was shut down saying that he isn't going to fight again. Diablo then used his powers to display the word 'bye' to Waller and Flag.

When Midway City was attacked by Incubus, the Government called to assemble Task Force X. The cell El Diablo was contained in filled up with water and flushed him out where he was apprehended by guards who injected him with a tranquilizer before he could escape.

The Squad was then briefed by Rick Flag on how they are to go about accomplishing their mission. El Diablo then gathered his gear and changed into street clothes and watched with everyone else as Harley Quinn got changed. El Diablo then commented on how they were the ones who were going to die on the mission saying they were being led to their deaths. The rest of the squad started to make jokes about El Diablo; Captain Boomerang asked if his tattoos washed off, Harley asked if he could light a cigarette with his pinkie and Deadshot reminded them that he could torch the whole area. He then reassured the squad that they don't have to worry about him.

When the squad had geared up, they were informed by Amanda Waller about their mission and what they are to do. If they were successful on their mission they would receive time off their prison sentence but if they fail, they would die. The squad gathered in a helicopter and were about to head off to Midway City when Katana joined them. The Suicide Squad crash-landed in Midway City and they made their way to retrieve Waller when Captain Boomerang and Slipknot attempted to escape. After witnessing Slipknot getting his head blown off, Rick Flag threatened the rest of the Squad.

Staying Out of the Fight

The squad proceeded when they came across some of Enchantress' minions who became hostile and began to attack them. While the rest of the squad fought off the creatures, El Diablo stayed out of the way and decided not to fight because he is afraid that he would lose control. After the fight Captain Boomerang approached El Diablo and mock him about not helping.

The squad made their way to John F. Ostrander Federal Building where they made their way upstairs where they were ambushed by Enchantress' minions. Once again El Diablo stayed out of the way while everyone fought off the creatures which made Deadshot pull him aside and tried to get him to fight. Becoming angry with Deadshot having a go at him, he used his powers to eliminate all of the remaining enemies which shocked the squad on how powerful he is.

El Diablo and the rest of the squad waited while Rick Flag and Deadshot went to retrieve Amanda Waller. They were greeted by Waller who threatened to blow their heads off when Captain Boomerang suggested killing her and Flag. When they were on the rooftop, a chopper hijacked by the Joker opened fire on the squad so El Diablo took cover. When Harley Quinn escaped and Deadshot went to shoot her, El Diablo watched believing she had been shot only to reveal to be pretending. The squad watched as the chopper got shot down and blow up thinking Harley had died.

As the squad left the building they saw Harley Quinn still alive to their surprise. After being informed that Flag and Waller are responsible for Enchantress destroying due to a failed mission, the squad decided to go to a bar and have a drink. El Diablo orders water and they listen to Deadshot review the mission and that they are the ones who will be blamed. El Diablo then preached to Deadshot and told the whole squad about how he used to rule the streets and accidentally killed his wife and children.

After hearing El Diablo's story Harley started to have a go at him telling him to own what he has done and that he can't have a normal life. Flag then joined them and told them that he is in love with June Moone and that he needs to stop the Enchantress. Flag told the squad that they are free to go but they decide to stay to help him, making sure that everyone will know what they did. The squad all got ready to fight Enchantress and Incubus and made their way through the destroyed train station.

As they made their way, Deadshot asked El Diablo if he was going to fight with them which he answered by being worried that he would lose control, which Deadshot said would give them a chance. When they reached the Enchantress, Flag told them to draw out Incubus so they can blow him up when suddenly Enchantress sensed them and told them to come out. She then showed the squad what they want and that she can give it to them. She showed El Diablo with his family alive until he breaks from her reality and owns that he cannot change what he did.

He then pleads to the rest of the squad to reject the realities Enchantresses promises them (e.g. Deadshot killing Batman and Harley having a family with the Joker), telling them that it is not real. An enraged El Diablo then goes to confront the Enchantress, defiantly declaring that she can't control him or the squad. They are then attacked by Incubus who easily overpowers the group. El Diablo then volunteers to get Incubus in the corner so he can be blown up. Stating that he is not going to lose another family to Enchantress, he goes and fights off Incubus to protect the squad with his powers which temporarily affects him until he knocks El Diablo away.

El Diablo gets back up and uses his powers and transforms into a flaming skeleton avatar and manages to overpower Incubus and get him into the corner. He then thrusts his superheated arm right through Incubus' extremely durable chest, weakening him until Incubus chokes him and reverts him into his original human form. Flag tells him to get away from the bomb, but knowing that he can't, he tells Flag to blow the bomb killing both Incubus and himself. Chato saved Task Force X and the world from Incubus' decimating Enchantress' power

Chato Santana was initially a vain and opportunistic man prone to anger, as he notably used his pyrokinesis powers to his advantage, becoming a successful crook. However, Chato couldn't fully control his powers when enraged, which ultimately resulted in him accidentally killing his wife and 2 children during an angry family spat.

Devastated by his deed, Chato voluntarily surrenders to the authorities and becomes a far more calm, collected, and withdrawn individual than before, not ever wanting to kill another person with his powers. He initially refuses to join Task Force X, and even after joining initially is extremely hesitant to use his powers unless necessary. Despite being withdrawn though, Chato relatively quickly befriends Harley Quinn, Deadshot, and Rick Flag, and is quick to save them from Enchantress' mental probing, which he overpowers due to his superior mental fortitude (as a result of him having become skilled at holding back his rage). Ultimately, Chato dies heroically, going all-out with his powers and sacrificing his life to defeat Incubus and save the world from Enchantress. 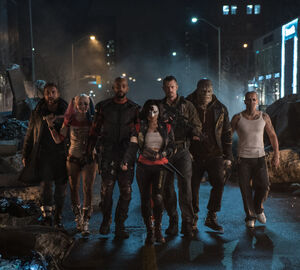 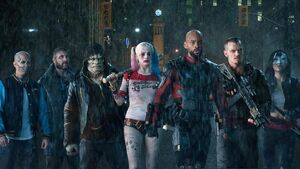