Eleanor Miller is one of the four tetartagonists and the female tritagonist of Alvin and the Chipmunks franchise. She is the third and youngest of The Chipettes, younger than Brittany and Jeanette. She is Theodore Seville's love interest.

She was voiced by Janice Karman for all TV Shows, Cartoon Movies and Vanessa Bagdasarian in CGI TV Series.

Eleanor has blonde hair in pigtails and brown eyes. Her signature color is spring green. She usually wears a light green/blue dress with a white long-sleeved shirt, sometimes with a striped tie, and knee-high socks with black shoes.

In the CGI series, Eleanor's hair is blonde/yellow in pigtails, and she has green eyes. Her attire frequently consists of a light green and dark green striped shirt, with a spring green skirt, and light green shoes with white laces.

Eleanor is self-assured, sweet, brave, confident and extremely maternal. She is a gifted athlete, despite her larger physique. Eleanor is quite strong-willed and she can easily stand up for herself and others than her timid sister Jeanette, as she can stand up to her older sister Brittany when she feels that she is wrong about things.

Eleanor gets along great with Theodore of the Chipmunks. They are very open about their relationship and have many similarities. For example, they both love food and are interested in cooking, except Eleanor is good at sports and other physical activities like gymnastics.

Eleanor was born the youngest of the three Chipette triplets in Australia. Luckily, they were taken in the care of by an orphaned human girl named Olivia in an orphanage until they were kidnapped by Miss Grudge (the runner of the orphanage) and Eva (another orphan).

That night when Olivia was adopted they all escape to New York where they worked as miserable diner waitresses and lived on the streets until they moved to California and eventually hit the big time. 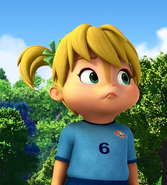 Eleanor in her Soccer uniform.

Eleanor caring for a baby penguin. 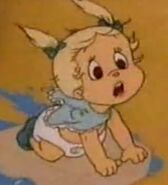 Eleanor as a baby.

Add a photo to this gallery
Retrieved from "https://hero.fandom.com/wiki/Eleanor_Miller_(Animated_Series)?oldid=1923877"
Community content is available under CC-BY-SA unless otherwise noted.