Hanging out with Chipmunks and her sisters

Get 7 keys to defeat enemies in Temples (succeeded)

Eleanor Miller is the youngest of the Chipettes and Theodore Seville's female counterpart and love interest. Alongside Brittany and Jeanette, she is one of the deuteragonists of the Squeakquel and Chipwrecked and one of the supporting characters in The Road Chip.

She is voiced by Amy Poehler in The Squeakuel and Chipwrecked and Kaley Cuoco in The Road Chip and singing voice is done by Janice Karman in English, and by Mika Kanai in Japanese.

She has a much softer and immature personality; she acts almost exactly like Theodore and seems extremely innocent.

Eleanor and her sisters and the Chipmunks go on for a cruise to the International Music Awards to perform, but when they borrow a kite they accidentally got shipwrecked and go to an island. At the island they meet a strange woman named Zoe who takes them under her wing.

Later when Brittany and Alvin discover a active volcano Alvin tells everyone that they need to get off the island by building a ramp but Zoe had other plans by finding the treasure behind the waterfall and plots to use them to get the treasure for her. 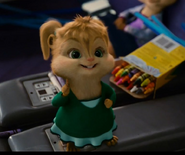 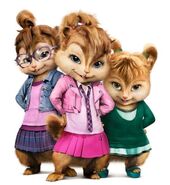