NOTE: This article is about the incarnation of Elektra from the Marvel Cinematic TV series. The mainstream version can be found here: Elektra (Marvel).

Member of the Chaste (formerly)

Flirting and falling in love with Matthew Murdock.

Serve the Hand (After being resurrected).
Lead the Hand and kill any who gets in her way. (formerly).
Kill Stick for trying to kill her, and to free Daredevil from his grasp (succeeded).
Make Daredevil love her even if she has to kill the other Defenders.

Elektra is an assassin who was sent to help recruit Daredevil into fighting against the Hand. However, she fell in love with him, and couldn't bring herself to bring him in to fight against the Hand. She now acts an anti-heroic ally of Daredevil, helping him defeat his enemies. She is an expert martial artist and she uses a pair of sais as weapons.

She was played by Élodie Yung as an adult and Lily Chee as her younger self.

Elektra is an assassin who was trained under Stick, (the same member from the Chaste who later trained Matt Murdock). She was tasked with bringing Murdock into the Chaste, but fell in love with him while doing so, and then abandoned him when he refused to kill Rocco Sweeney (the man who had killed Matt's father), on her behalf. She returned to his life after years of absence, Murdock reluctantly accepting her assistance against the Hand in New York City under the condition she kill no one, a promise she broke when she killed a young Hand initiate to save Matt.

Later, she was revealed to potentially be the Black Sky, the one who is supposed to lead The Hand. However, Elektra chose to help Murdock defeat The Hand, who vowed to kill Daredevil for meddling and taking away their destined leader. Although she and Daredevil had promised to start a new life together, this was denied them when Elektra was killed in the final confrontation with Nobu Yoshioka. Shortly afterwards, The Hand retrieved Elektra's corpse from the grave and placed it in a stone chamber to be exposed to the Resurrection Elixir.

After her resurrection, Hand leader Alexandra Reid manipulated Elektra and took her under her wing, re-training her to truly become the Black Sky. After becoming the Hand's personal weapon, Elektra fought Murdock and his new allies the Defenders, which reawakened her past self through her interactions with Matt/Daredevil. Striking out on her own, she spent some time wandering New York City trying to remember who she was in full, culminating in her going to Matt Murdock's apartment and sleeping in his bed, trying to remember the intimate relationship they'd once shared.

After breaking free and taking over the Hand by killing Reid, Elektra descended into nihilistic madness, helping the remaining Hand leaders return to K'un-Lun no matter who had to die along the way. In the battle under the Midland Circlebuilding that followed, Daredevil fought Elektra and tried desperately to get her to renounce the Hand, but Elektra rebuffed his every effort, consumed in nihilism and hatred. But at the last minute though, he seemed to finally get through to her, only for both of them to then be buried under the Midland Circlebuilding when it was destroyed. Though Matt was later revealed to have survived, Elektra's fate is presently unknown.

Elektra is shown to be a very confident woman, in both her skills and looks, once telling Matt Murdock that every man she's ever met has wanted to sleep with her. This has led her to be arrogant at times as she believed that she was superior to Stick and that the only reason he attempted to have her killed by sending his own assassin Jacques Duchamps after her was because of his jealousy of his pupil becoming a better killer than he was.

However, Elektra states that she is alone in the world and believe that Murdock and her are kindred spirits as she viewed him as the only person who understands her for who she is deep down. She was deeply upset when he refused to kill Roscoe Sweeney, claiming "I thought you understood me". Elektra also had a habit of becoming bored quite easily which Murdock picks up on their first meeting. Thus, she has developed a fun-loving, free-wheeling and wildly unpredictable personality and is more than capable of having a good time throughout her crusade with Daredevil, enjoying both the fight and the physical challenge that came with it.

Being raised by the Chaste for most of her life, Elektra learnt to be the perfect assassin and killer. She can be coldblooded to her enemies and enjoyed killing them; the first time she did was when she was twelve and that was in self-defense but admits that she liked doing so. She doesn't possess Murdock's moral compass but at the same time seems to respect him for his refusal to kill whereas Stick would degrade him for it. Elektra tends to think of her goals as first and furthermost importance with little sympathy to others and little care or even realization over breaking the law. For example to assist in Murdock's case she forces a confession out of Doctor Gregory Tepper but her involvement made his confession useless entirely and after killing a Hand assassin she believed that it being in self-defence would absolve her over any punishment which Murdock corrected.

Unbeknownst to Elektra herself she was in actuality the Black Sky, a mythical deity within the order of the Hand who is worshiped by its followers. Though she herself had known to have darkness in her heart; this side was violent, volatile and the main reason why she was said to enjoy killing so much. When Nobu Yoshioka finally revealed the truth, Elektra accepted it almost immediately as she seemed to feel that it was truly who she was because her mentor always told her to hide who she was after being adopted to a wealthy family, but it was ultimately Daredevil's words that no one could tell her who she was that put her down the path of good.

In the end, Elektra was a much more selfless and brave woman who was willing to sacrifice herself for the man she loved and assuring that the Hand would never be in possession of the Black Sky, allowing Yoshioka stab impale her with her own Twin Sai during the battle. She died claiming she knew what it meant to be good. However, Elektra was still more concerned about her goals than anything else as she was willing to ignore the hostages that the Hand had kidnapped but she ultimately decided to help Daredevil save them.

Her resurrection as the Black Sky by the Hand's Substance granted Elektra numerous enhanced attributes: 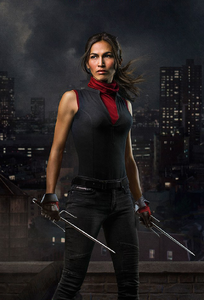 Elektra in the second season of Daredevil. 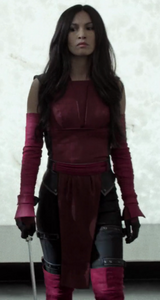 Elektra in The Defenders. 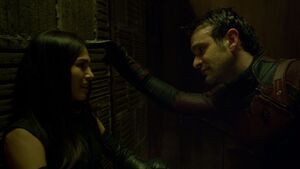