Heroes Wiki
Register
Don't have an account?
Sign In
Advertisement
in: Rejected Good Articles, Female, Voice of Reason,
and 28 more

The Girl (by Sully)

Last Year's Model (by herself)
Sunshine (by Chloe)

Spending time with her husband and daughter.

To stop Nathan's enemies (all succeeded).


Elena Fisher is one of the two deuteragonists (alongside Victor Sullivan) of the Uncharted video game series. She serves as the deuteragonist of both Drake's Fortune and Among Thieves, a supporting character in Drake's Deception and one of the two tritagonists (alongside Victor Sullivan) of A Thief's End. As of A Thief's End, she is married to Nathan Drake, with whom she has a daughter named Cassie.

Elena is an American former journalist, TV personality, and foreign correspondent who appears in every console game in the franchise. Amy Hennig commented that she created Elena to be the "female version of Drake" instead of the "damsel in distress" type.

Elena is voiced and motion captured by Emily Rose.

Elena was born to unnamed parents, and later became an employee at the Macho Nacho in high school, describing her manager who was a paranoid psychopath. After high school, she attended both Knight University and Rockport University, where she earned awards in journalism. After coming in second on a popular survival reality show, she went into hosting a cable archeology show named Discovered. There, she gained some knowledge on archeology and architecture, knowing about ancient stone that formed buildings back then.

Elena briefly appears in Eye of Indra, where she reporting on television that Nathan Drake and Victor "Sully" Sullivan were watching at a beach resort. Nate explains to Sully that he is meeting with Elena to discuss cost arraignments to find Sir Francis Drake's coffin.

Elena is the "female version of Drake" as creator Amy Hennig describes; she is just as charming, intelligent and tenacious as him, and can hold her own when climbing or under fire.

This is pointed out by Nate himself in Drake's Fortune as he is impressed by her ability during the attack on their boat. The two have the same sense of humor and cavalier attitude toward their opponents, but she tends to be more naïve and compassionate (such as when Harry Flynn is dying).

Elena is optimistic and cunning, driving Nate to keep moving forward. She doesn't always agree with Nate's decisions but helps him anyway. She becomes a much better strategist over the course of the games. She helps Nate plan ways into sneaking into restricted areas and taking out opponents.

Nate is immediately attracted to Elena, but is initially only interested in using her and her production team to fund his own exploits. After Elena tracks down Nate, they are forced to cooperate. She is attracted to Nate's heroism, though between the games, the dangers of his job puts strain on their on-off relationship. They eventually marry, but once again break up when Nate returns to treasure hunting. Following his confrontation with Marlowe in Drake's Deception, Nate finally settles down and the two enter a more stable relationship together in New Orleans until Sam, Nate's forgotten brother, tracks them down.

Nate then chooses to lie to Elena, while he secretly continues his hunt for Henry Avery's treasure. Elena eventually tracks them down, and all three leave the island of Libertalia alive. 13-15 after the events of A Thief's End, Elena and Nate are living on a beach house with a daughter named Cassie and a Labrador called Vicky, having finally managed to balance a normal life with their longing for adventure.

Elena and Sullivan have a friendly relationship, which improves naturally as she and Nate grow closer. By Drake's Deception, Elena voices her concern that Nate is going to get Sully killed if he continues his line of work, and cites it as one of the reasons for their break up. It is believed that they remained friends after A Thief's End, with Sully regularly visiting her, Nate, and Cassie at their beach house.

Elena and Chloe are very much the exact opposites of each other which serves to portray different sides of Nate's personality. Initially, the two women are at odds as both of them subtly compete over their feelings for Nate. When Chloe is taken hostage by Lazarević in Among Thieves, Elena reluctantly assists Nate in freeing her. Elena and Chloe are much less antagonistic with each other when they cooperate in Shambhala and Chloe helps save Elena's life following her grenade injury from Harry Flynn.

Despite not meeting on-screen, Elena knows about Charlie. Her reaction to his involvement suggests she's aware of his partnership with Nate. Sully assures her that he is not dead after breaking his leg in Syria. 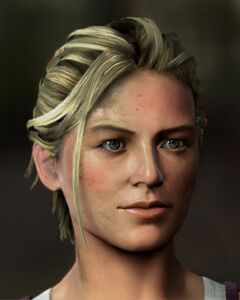 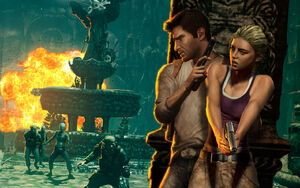 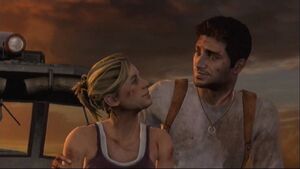 Elena and Nate after the adventure. 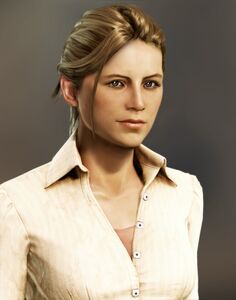 Elena in Uncharted 2: Among Thieves. 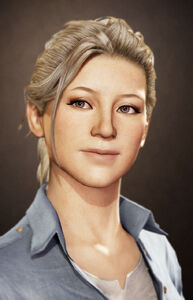 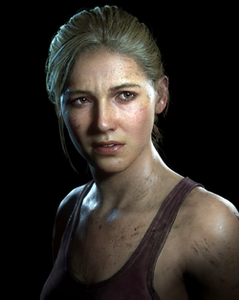 Elena in Uncharted 4: A Thief's End. 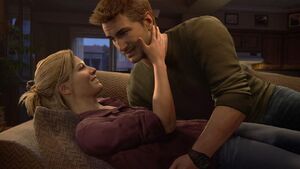 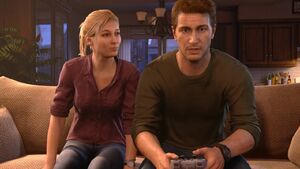 Elena teasing Nate for not getting a high score in Crash Bandicoot. 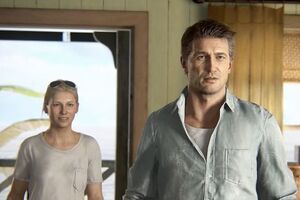 An older Elena and Nate in the epilogue of A Thief's End. 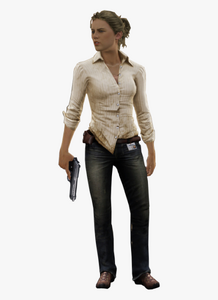 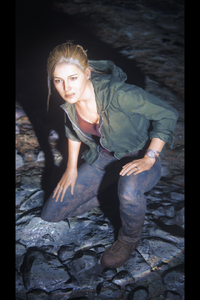 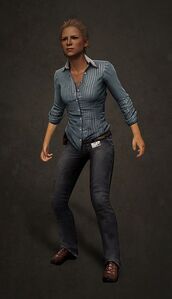 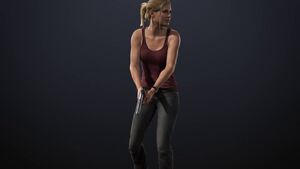