Take down Dominic Toretto, Brian O'Conner and their crew. (formerly)

Elena Neves is a major character of The Fast and the Furious franchise. She is an anti-heroine of Fast Five, a supporting protagonist of Fast and Furious 6 and Furious 7, a major protagonist of The Fate of the Furious and a posthumous character of F9. She is a patrol officer turned DSS Agent in Rio de Janeiro, Brazil who assisted Luke Hobbs and the Diplomatic Security Service in tracking down Dominic Toretto and Brian O'Conner. She is personally requested by Hobbs since he realizes she is the only officer who is not on Hernan Reyes' payroll.

She was portrayed by Spanish actress Elsa Pataky.

Role in the movies

Elena is a member of the local police force in Rio. She is involved with the search for Dominic Toretto and Brian O'Conner as Luke Hobbs requests an officer who has knowledge of the area as well as the ability to translate Portuguese. Hobbs also believes that, due to her past, she is cannot be turned or bought on by Reyes. During the chase scene, she has an opportunity to shoot Dominic, but elects not to. She retrieves a silver necklace that Dominic leaves behind - a necklace that belonged to Letty. When Dominic returns to take the necklace back from Elena, they reveal a bit of their past; Elena is a police officer because her husband, a former police officer, was killed in action at the hands of the cartel.

At the end of Fast Five, she begins a relationship with Dominic. In the end, they are seen together holding hands as they visit Brian and a very pregnant Mia Toretto.

In Fast & Furious 6, she and Dominic are in a seemingly loving relationship, living together in the Canary Islands in Spain. When Luke Hobbs visits Dominic's house with photos of Letty alive and well, she urges Dominic to go with Hobbs to find Letty, claiming that if it were her late husband in the photos, she would go as well. While she sees almost no action during the film, she helps Jack (Brian and Mia's baby) escape to safety.

At the end of the movie, she is seen with a police badge around her neck as she accompanies Hobbs to Los Angeles with the delivery of full pardons to Dominic and the entire crew. Elena accepts that Dominic has chosen to be with his former love Letty as she is respectful of his family-driven values.

Still working with the DSS in Los Angeles, Elena goes to speak with Hobbs, who is frustrated with the lull in criminal activity. As she leaves the office to her car, Hobbs gives her a letter of recommendation.

Hobbs then engages in a fight with Shaw and Elena offers support. Shaw throws a timed explosive near Elena but Hobbs pulls her out of danger. The explosion sends them flying out the window. Hobbs' actions save her, but he is severely injured after landing on his back on top of a car.

When he's hospitalized, Elena looks after his daughter, Samantha Hobbs, and contacts Dominic at Hobbs' request immediately following the destruction of the Toretto House. After providing Hobbs with information on Deckard Shaw, Elena escorts Samantha out of his hospital room in order for Hobbs and Dominic to talk privately.

At an unspecified time, Elena and her son Marcos are kidnapped by Cipher, a cyber terrorist looking to start a nuclear war. Cipher uses Elena as a bargaining chip and when she manages to convince Dominic to work with her, she decides he needs to be reminded about why he chose to work with her.

Cipher takes him to a holding cell and reveals a sleeping Elena. When she wakes, she and Dominic are allowed to reunite. Elena tells Dominic that he should not have come after her, as now Cipher has "the three of them". Elena introduces Dominic to her son, Marcos after asking if Dominic wanted to see him.

Elena explained that she discovered she was pregnant after Dominic learned Letty was alive. She intended on telling him after he and Letty returned from their honeymoon, but Cipher kidnapped her and the baby while they were in Cuba. When Dominic asks for his name, Elena explained that she called her son by his middle name, Marcos. He did not have a first name yet and felt Dominic should choose it.

Elena asks Dominic to save their child no matter what happens to her. After Dominic allows Letty to escape, Cipher decides to let Connor kill Elena. Cipher steps forward holding Marcos as the lights turn on to reveal Elena tied to a chair with tape over her mouth.

Elena and Dominic beg for Cipher to leave Marcos alone while Connor Rhodes stands behind Cipher holding a gun. As Elena screams for her son's life to be spared, she is killed by Connor and after Deckard Shaw reported to Dom that he has rescued his son, Dom avenges Elena's death by killing Connor. Following the prevention of a nuclear war and Cipher's escape, Dominic promises Marcos (as a way of promising Elena) that he would remain safe under his protection. Dominic names Elena's son after his friend, Brian.

Elena does not appear in F9 (due to her now long dead) but she is mentioned a couple times throughout the movie.

Elena is highly perspective and sees details that don't fit into a criminal's M.O. One example was when she questioned the motives for Dominic Toretto and Brian O'Conner killing DEA federal agents when their crimes were often minor heists that often did not result in killing the truck driver they were heisting. From this, she deduced they were framed. 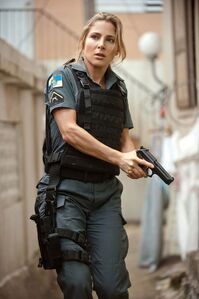 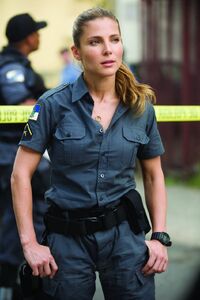 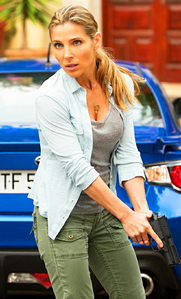 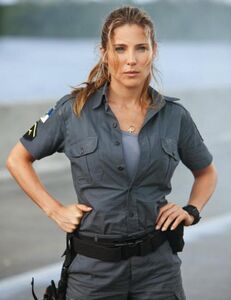 Elena is captive on Cipher's plane.