Hanging out with Bibble.

Defeat Laverna and save Azura and her friends (succeeded).

Elina is the main protagonist in the Barbie Fairytopia series. She is a flower fairy who lives in Fairytopia.

She is played by Barbie and voiced by Kelly Sheridan.

Elina is a wingless fairy who lives in a flower called Peony in the Magic Meadow of Fairytopia. She is often taunted by other fairies and pixies for not having wings, but her best friend Dandelion always stands up for her. An evil fairy named Laverna uses a formula to make all the flying creatures of Fairytopia weak, and makes her minions unleash it.

In the morning, Elina discovers that Fairytopia is weak, and the Magic Meadow's guardian, Topaz, has been kidnapped. She takes it upon herself to find Azura, the guardian of Fairytown, and ask her for help. Dandelion and Bibble accompany her, but in the forest, Dandelion flies into Laverna's formula and falls to the ground. She leaves Elina and Bibble, who get to Fairytown and follow a pixie to find Azura.

Azura gives Elina her magic necklace and Azura gets kidnapped by Laverna. Hue, a butterfly, comes to take Elina to the Withering Wood. There, they plan to meet a dryad named Dahlia, who can help them defeat Laverna because she used to work for her. On the way, they are chased by firebirds, and they go to a mermaid cove for safety. A prince named Prince Nalu helps Elina and their friends and they get to the Wildering Wood.

Dahlia doesn't want to help at first, but she wants to help Azura because she believed Dahlia was good after she stopped working for Laverna. They go to Laverna's lair and stop her from taking the Fairytopia guardians' powers. For this, Elina is rewarded with wings from the Enchantress, the ruler of Fairytopia.

Only weeks after Elina finally got her wings, she's already a great flyer. Bibble realizes Elina is being followed by a Sea Butterfly, but only so she could tell Elina about what she had seen at the crystal cove: Laverna's Fungi capturing Prince Nalu. Elina goes to investigate with Bibble and the Sea Butterfly, and realizes the water in the cove has been poisoned. Laverna is using Nalu to find the immunity berry, so she can eat it and be immune to all magic, past, present and future. She meets the mermaid Nori and asks for her help, but instead gets into an argument. A sea turtle named Tutu helps Elina follow Nori by bringing her the special seaweed used to breathe underwater. She then begins her journey to Mermaidia.

After Elina finds Nori, she is invited inside the Merfairy's home to learn about the oracle named Delphine. The Merfairy tells Elina a riddle to help her out: "If you want to find Dephine, it's not hard to do, talk to the Fairy Guide, and listen well too. Dephine has a secret which from she will hide, the shell matters not, best heed what's inside." Elina races Nori to the Fairy Guide. Later, she discovers that the mermaid in the shell is not the real oracle, it's Shelly, the Fairy Guide. In order to travel through the Depths of Despair to reach the Mirror of the Mist, Elina learns she has to give up her wings and trade them for a tail. Elina argues with Dephine and is instead given a necklace, which Elina can use to wish for a tail. After she has a tail, the necklace will fade back to white. If she isn't out of the water when the last pearl is fully white, she will lose her wings forever.

Elina travels to the Depths of Despair with Bibble and Nori. The current is too strong for Elina and she struggles to swim through it. Nori swims ahead but is snatched by some seaweed and trapped. The only way for Elina to save Nori is by swimming down and getting her. Elina trades her wings for a tail and bravely rescues Nori. They make it to the Mirror of the Mist and discover that Nalu is tied up and held out of the water. They follow a magic bubble to start them on the right path. Meanwhile, the Max the Fungus has found the immunity berry. The bubble pops when it is at a tunnel, filled with hot flaming geysers. Elina and Nori make it through but lose Bibble, but not before Nori swims back and saves him. They then swim through a large garden with many different kinds of magical berries, including one that reveals your true self, which looks exactly like the immunity berry, but without a red stripe.

Elina and Nori find Nalu, and use Bibble to distract the Fungi. They eventually get the berry and save Nalu but are chased by the Fungi. Elina reaches a dead end and has to chose between giving Max the berry, or letting the poison destroy all of Mermaidia. Her pearls are almost all white when she gives Max the berry. He then deviously throws the poison into the water anyway, but Mermaidia is saved when Elina dives down to get it. Her pearls are fully white and she is faced with the prospect of being a mermaid forever - at least until Nori kindly gives her the true self berry, which turns Elina back into a fairy, with even prettier wings. It is revealed that Nori and Elina switched the immunity berry with the true self berry (which they somehow painted a red stripe onto to make it look just like the immunity berry), meaning the Fungi took the wrong berry. Laverna eats the true self berry, is turned into a toad, and vows revenge on Elina. Elina has successfully saved Fairytopia once again.

Magic of the Rainbow

Elina goes to a fairy school to learn how to perform the Flight of Spring as an apprentice under Azura. There, she meets a fairy boy named Linden who can talk to animals. When they meet again in the Fairy School, they become good friends. Elina also meets other pupils of the school who train along with her. Glee becomes good friends with her and Lumina is warm towards her. But Sunburst, Shimmer and Faban do not like Elina. However, in the end of the movie, Elina is liked by everyone, and tells Linden that she will miss him very much, hinting that she likes him.

Elina lives with Bibble, a puffball. When she is made fun of, she doesn't retaliate, and remains calm. She is a kind-hearted, nice, friendly, smart, brave, and strong but often paranoid fairy. She usually shows the way for other fairies, and mermaids too. She always has hope and in difficult times, she comes up with great ideas. 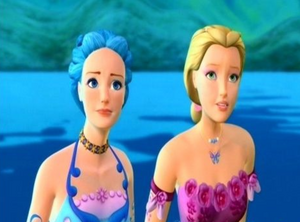 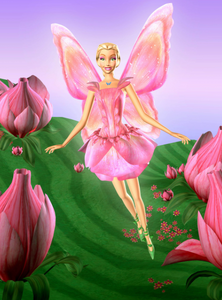 Elina in the first movie. 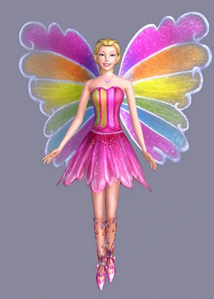 Elina in the third movie. 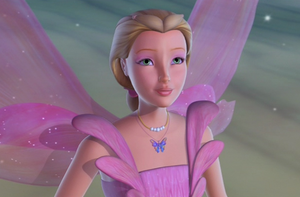 Elina under pressure after Delphine tells her she needs to get a tail. 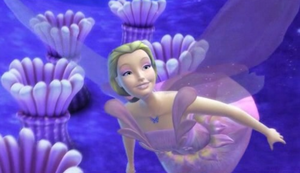 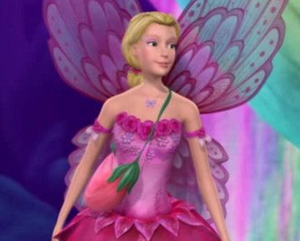 Elina in the old game before it was taken down on the website. 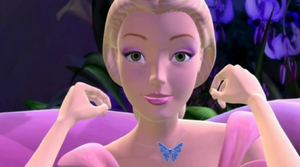 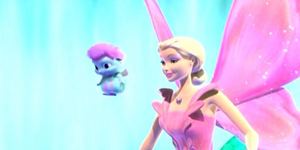 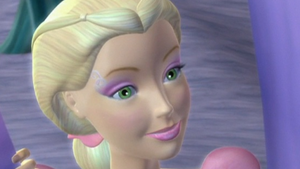 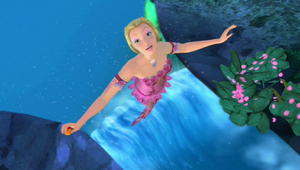 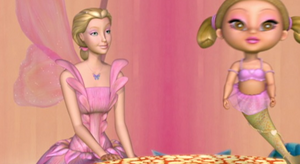 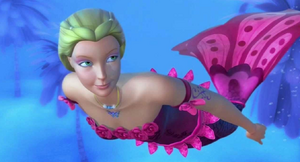 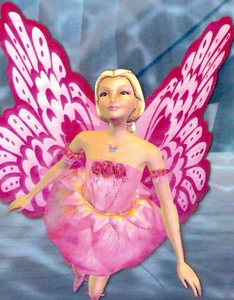 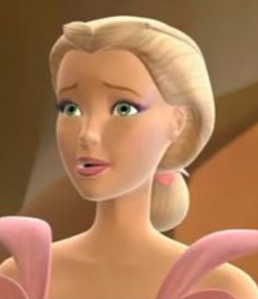 Retrieved from "https://hero.fandom.com/wiki/Elina_(Barbie)?oldid=1753126"
Community content is available under CC-BY-SA unless otherwise noted.