Elincia (エリンシア Erinshia, Erincia in the Japanese version), full name Elincia Ridell Crimea (エリンシア・リデル・クリミア Erinshia Rideru Kurimia), is a heroine in Fire Emblem: Path of Radiance and Fire Emblem: Radiant Dawn. In Path of Radiance, she is the Princess of Crimea and only known remaining member of the Crimean royal bloodline. In Radiant Dawn, she serves as Crimea's queen.

Elincia is the secret princess of Crimea whose birth was hidden to prevent a power struggle. This succeeded at the time, but it backfires later, because it leads to some problems convincing people that she is indeed the princess that supposedly doesn't exist. She hires the Greil Mercenaries, and the plot of most of Path of Radiance revolves around her attempts to re-take her country and the lengths she goes to do so. 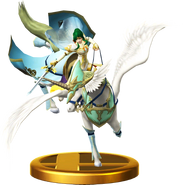 Elincia (Estival Princess)
Add a photo to this gallery
Retrieved from "https://hero.fandom.com/wiki/Elincia?oldid=2007740"
Community content is available under CC-BY-SA unless otherwise noted.