Pokémon Trainer
Champion of The Alola Region (with Selene)

Elio (also known as Sun) is a Pokémon Trainer and the male protagonist in the games Pokémon Sun and Moon, Pokémon Ultra Sun and Ultra Moon, and one of the two main protagonists alongside Selene, and at the end of the games, they become the first ever Champion of the Alola region.

Elio is shown to be wearing a black baseball cap with a white Poké Ball like symbol planted on the front, also having a blue brim. Likewise he has a short black hair and pale skin complexion, with slate grey eyes. He has a blue and white striped t-shirt, black and red cargo shorts, and blue and teal water shoes.

Elio is shown to be caring for Pokémon, curious, and adventurous. Likewise, he makes his lifelong goal to protect all Pokemon from falling in the writing hands.

Elio is a boy who recently moved from the Kanto region to Melemele Island in the Alola region. Early in his adventure, Elio meets the guardian deity of Melemele Island, Tapu Koko, and quickly befriends Lillie, her Cosmog Nebby, and Hau. After receiving a starter Pokémon from Melemele's Island Kahuna, Hala, Elio begins his island challenge in earnest.

During his island challenge, Elio encounters Team Skull, a group of hooligans harassing people and interfering with the island life; the Aether Foundation, an organization dedicated to protecting Pokémon; and Gladion, a mysterious boy who works as an enforcer for Team Skull. He also learns about Ultra Beasts, mysterious creatures that exist in a dimension called Ultra Space; and about Professor Kukui's dream of building an Alolan Pokémon League. 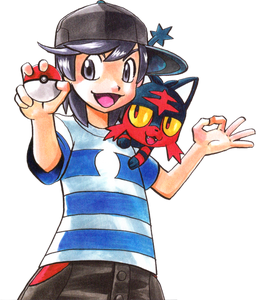