Heroes Wiki
Register
Don't have an account?
Sign In
Advertisement
in: The King of Fighters Heroes, Female, Magic,
and 40 more

Noblewoman of the Blanctorche family

Normal function without sleeping in 3 days

Elisabeth Blanctorche is one of the deuteragonists in The King of Fighters franchise, originally appearing in The King of Fighters XI and a deuteragonist of the Tales of Ash Saga. Her initial character concept was to be the rival to Ash though developers decided to change her importance into a "leading lady" character. Her earlier design resembled a tougher modern-day equestrian including a short whip -they kept the whip as they liked the idea of short, quick movements. Developers also describe her fighting style as "orthodox with subtle tricks [to it]" despite her minimal moveset.

Elizabeth is the last remaining Blanctorche, a French aristocratic family that is said to protect innocent people. She is also a childhood friend of Ash Crimson who grew up in the same mansion. Elizabeth used to play the image of his sister until a fire destroyed the mansion and many of her people to the ground. As the only Blanctorche, she and her butler Jacques lived near her family's home.

Elisabeth originally invited Benimaru Nikaido and Duo Lon to France, indicating that she knew Ron's betrayal and the burning of Hizoku village. They told her that Ash's theft of Chizuru Kagura's mirror was stolen and she decided to join them. As the trio's interest dismantled Ash, they formed the Rival Team, and she eventually slammed Ash, seeming to give up their mission. Although she was surprised by the young people's new strength, she vowed to stop him from entering the team's finale.

Before meeting Duo Lon and Shen Woo, she relived the burned mansion, where she and Ash spent some of her photos. While meeting her guests, she realized was going to join the King of Fighting tournament with her and Ash's location in Paris. Although she just missed him, Elizabeth knew that he was there and strengthened her will to stop him. Soon after the ashes erased Saiki, she reunited with Ash in the act of the tournament. She yelled at his selfish decision and said she wanted to take Ash home. When he disappeared in an apology, Elizabeth mourned for only memento he left behind: his headband.

After the event of XIV, Verse was destroyed the souls they contained in the world, Elizabeth was told by Kukri that he finally found Ash, whose soul was trapped in Verse's body.

Elisabeth is shown to be a highly Noblewoman with blue hair and eyes. She wears a French coat and tall boots.

She is a very serious and strict high class member of nobility. Once she has decided to do something, she'll do whatever it takes to get it done. Perhaps due to her upbringing, she doesn't find it urgent to always keep her promised meetings with her teammates of lower stature. Though she is the one who invites them to her dwelling, she arrives tardy and usually denounces them within a few moments of their conversation.

She fondly thinks of Ash as her younger brother, but she has since prepared herself to stop him at any costs. Elisabeth finds condolence with her pleasant, elderly butler, as he is the only one near her who knows the details of her past with Ash. 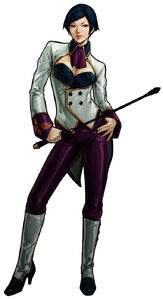 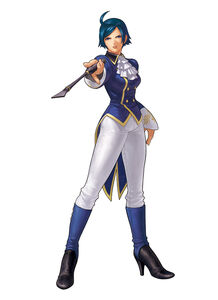 The King of Fighters XII. 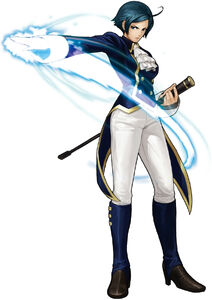 The King of Fighters XIII. 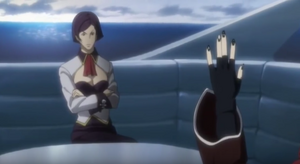 The King of Fighters: Another Day. 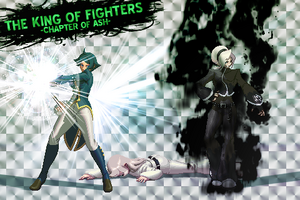 The King of Fighters XIII Trading Cards: Chapter of Ash. 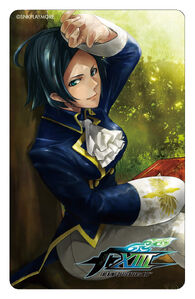 The King of Fighters XIII: artwork by Eisuke Ogura.