Playing around even with her half-sister Azura
playing music with Sakura
wanted to bring peace.

Elise (エリーゼ Erīze) is a major playable character from Fire Emblem Fates on the Conquest and Revelation routes. Elise commands the loyalty of Arthur and Effie as her personal retainers.

Elise is voiced by Ayaka Suwa in the Japanese version and by Natalie Lander in the English version.

Elisa is a young girl blonde hair with purple highlights tied into twintails and purple eyes. She her twintails is tied with two pairs of black bows and she wears a pink, black and white outfit with black boots with pink ribbons.

Elise makes an appearance in Fire Emblem Warriors as a playable character.

in Super Smash Bros. 4, Elise makes a cameo in the Corrin's reveal trailer, in Ultimate, Elise appears as a ace support spirit in world of light, her spirit battle is a timed battle against orange Isabelle who heals over time on the Coliseum stage 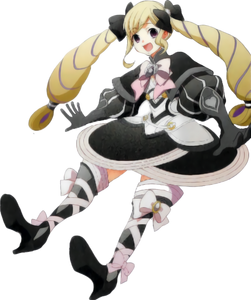 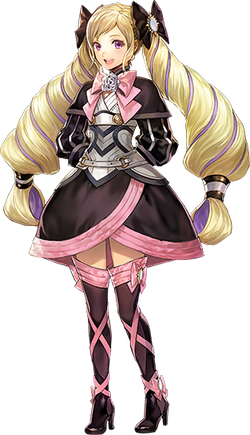 Elise (Bubbling Flower)
Add a photo to this gallery

Retrieved from "https://hero.fandom.com/wiki/Elise_(Fire_Emblem)?oldid=1955049"
Community content is available under CC-BY-SA unless otherwise noted.