Playining with friends
Dreaming fairies
Speding time with her father

Be lisen by her father
Do see Tink (both succeeded)

Kid
Elizabeth Griffiths (usually called Lizzy) is the dueteragonist of the movie of Disney Fairies, Tinker Bell and the Great Fairy Rescue. She was voiced by Lauren Mote.

She has loved fairies since she was a child, but her father, Dr. Griffiths, does not believe her often and marginalizes her from him, but despite this Lizzy continues to be happy and kind.

Lizzy is in a sense the voice of her father's reason, but she is never heard. Eventually, however, after Dr. Griffiths sees real fairies she realizes she is wrong and apologizes.

Lizzy is first seen towards the beginning of the film with her father going to their country house for the summer vacation. Lizzy would like to have a picnic by the lake, but her father says she has something to do and must find scientific discoveries for her experiments, both unaware that Tinker Bell and Vidia are spying on them.

Lizzy then builds a house for fairies in case she finds a real fairy, as her father doesn't believe in their existence at all, and of course Tink ends up in that house.

Excited Lizzy tries to show her father to her, but thinks about it soon after she sees that her father has taken the farm flaw before her, and soon Tink and she become great friends with her.

Together they play together and Tink teaches Lizzy all about fairies. The night while Lizzy sleeps, Tink fixes the Griffiths' house a bit and in the meantime frees the butterfly, which the next day Dr. Griffiths blames Lizzy on the butterfly's release and doesn't believe her as usual and puts her in detention.

Lizzy tries to explain everything about her, but he doesn't believe her again and thinks of making her stop with her imagination. Tink furious about this flies in his face and threatens him (hearing only a bell), with a shock from the doctor, who decides to take her and take her to the museum, Vidia arrived at the moment with the others ends up in Tink's place, Lizzy's attempts they are of no use and Dr. Griffiths leaves for London.

Tink reunited with her friends, decides to let Lizzy fly, she is frightened by the idea of ​​her, but Tink reassures her and they all leave together.

After Dr. Griffiths starts running after Tink damages his car, and Lizzy catches up with him and begs him not to take Vidia into the museum before he gets it.

Lizzy finally gets her father to listen to him and explains how things work, Dr. Griffiths realizes her mistakes and apologizes to everyone and promises Lizzy that from now on he will never doubt her again, and makes Vidia free.

Finally, Tink and Lizzy teach Dr. Griffiths how to fly and play a game at the Big Ban and then go home having fun.

Lizzy is last seen with Tink, the other fairies and her father who are finally spending time together having that picnic that Lizzy wanted to do from the beginning. 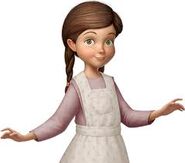 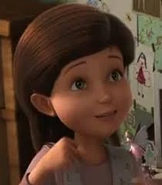