Stop terrorist and the people on the blacklist

Special Agent Elizabeth "Liz" Keen (birth name Masha Rostova) is an FBI special agent, and the main protagonist of The Blacklist, and was a guest character for the spinoff The Blacklist: Redemption.

She is portrayed by Megan Boone, and Jillian Lebling young, and Lily Lewinter as a child.

Masha Rostova was born in Moscow during the Soviet Union era, and is the daughter of Raymond Reddington and Katarina Rostova. The man guised as Reddington at the start of the series, Ilya Koslov, is not her father as revealed later in the series. Katarina is a former KGB agent who was assigned to seduce and spy on Raymond Reddington, and later became a double agent for the Cabal, betraying the KGB and started to work for Alan Fitch.

Reddington took Masha from Katarina, and she gave up everything to follow them and reunite with their daughter. Masha was four years old when Katarina found her and Reddington, and she confronted him until it escalated into a physical confrontation. Masha shot and killed her father to stop him from attacking her mother, and Katarina and Ilya (her childhood friend and lover), attempted to save Reddington from a fire, to no avail.

Katarina decided to give up Masha for adoption to protect her from the Cabal and the KGB, and possibly because she killed her lover. Masha was adopted by Sam Scott, and was named Elizabeth and took Sam's surname. In addition, Ilya decided to take the identity of Reddington, something Sam and a few people knew about.

Elizabeth went to an unknown college in her youth, and earned a degree in forensic psychology. Elizabeth decided to join the Federal Bureau of Investigation, and was head of the mobile emergency psych unit in New York. When asked to profile herself by Harold Cooper, she states that her subordinates would call her "sir", and thought she was a "b***h". In addition, she graduated from Quantico a month before the series began.

Around the same time she joined the bureau, she met Tom Keen, whom she fell in love with, and later married. However, Ilya had ordered Tom (who's real name was Christopher Hargrave) to spy on her, but was later fired when he became romantically involved with her.

On the first day of her new job as an FBI profiler, Elizabeth overslept with Tom, but is escorted from her house to the FBI. At the FBI headquarters, Elizabeth is interviewed by Harold Cooper about why Raymond "Red" Reddington chose her as his intermediary, but doesn't know why. She is then taken to the Post Office where she meets Red, who informs her that Beth Ryker is going to be kidnapped by Ranko Zamani.

Liz convinces Agent Ressler that the information is valid, and calls Tom to tell him that she won't be able to make their lunchtime adoption agency appointment. Liz then collected Beth from her ballet class, but when being driven to a safe house, they are ambushed and Liz is forced to let Beth be taken when she is overcome by tear gas. She questions Red, and he tells her about two more gang members, who he can trace in return or better conditions.

Liz returned home to find decorations declaring "it's a girl", and is unable to notice that Tom is tied to chair and has been tortured. Zamani appears and holds her at gunpoint, and questions her about how much she knows, and stabs Tom when she answers honestly. Once Tom is in the hospital, Liz storms into Red's hotel room and questions him about the attack on her husband. Dissatisfied with his reply, she stabs him with a pen, and later discovered that Red escaped from the hospital.

Liz later realizes that Zamani is going to release a chemical bomb in the zoo, and is going to use Beth to deliver it. Liz rushes to the zoo and successfully keeps Beth calm while the bomb is defused. At home, she attempts to remove Tom's blood from the carpet, and pulls it up to discover a secret floor that contained a box. In the box, she finds large amounts of money, several passports with Tom's face on them, and a sidearm.

She is given a polygraph examination by the FBI in an attempt to determine whether any prior relationship between her and Red. She works with Ressler to warn Floriana Camp about the attempt on her life, and stops her assassin with a taxi. Keen interrogates Floriana, and becomes suspicious when she refers to Red as "Raymond", and later learns that Floriana was poisoned by Red.

Liz performs an emergency tracheotomy by using a pen to allow Floriana to breath, and Red forces the latter to admit her double life and guilt if she wants the antidote (but later reveals that there was no antidote). Keen goes home and searches Tom's clothes from when he was shot, and finds a USB key containing a testimony recorded by him about her to the adoption agency.

Red tells her that he was been contacted by Wujing, a spy killer requesting that he decodes a message identifying an American agent. Liz is reluctant to help him, but Red counters that if he doesn't decode the message, someone else will. At headquarters, she request a ballistic report on the bullet and cartridge from the gun she found at home, and is convinced to involve herself in the operation to capture Wujing. In the bunker, Liz installs her mirroring program on Jin Sun's computer, and decodes the message.

Later on, she is shocked by Red when he shoots Sun, and tells her that he will do anything to keep her safe. After Wujing drops them off, she places her tracker on the side of his car, and asks Red why he chose her. Red reveals it's because of her father, and when asked if he knew him, he responds that it's complicated. Liz receives the ballistics report, but it's been redacted into worthlessness, and goes home to Tom's welcome home party. She later attempted to find evidence in the homicide box, but was only able to get a place - Angel Station, and the date June 23, 2012.

Through the first season, Liz confronts Tom about the box when he she tells them that they need to talk, and has him interrogated at the Post Office. During this, Cooper tells Liz that she is on leave while the interrogation is going on, and later confronts Red when he falsely states that Tom is Gina Zanetakos' lover.

Through the series, Keen continues to work with Red on stopping people on the blacklist, notably the Alchemist and the Kingmaker. In addition, she learns that Tom is an operative, and later divorces him, but remarries him and they have a daughter named Agnes. Red informs her that her parents were spies, and later learns that Raymond is her father. However, by season five, it's revealed that Red isn't her biological father, but an imposter as she killed her father when she was young. Also, she becomes a fugitive and criminal by season three, having to hide as she is on the wanted list. 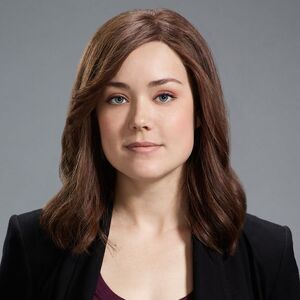 Elizabeth in season one. 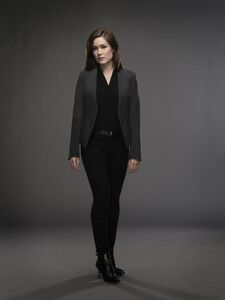 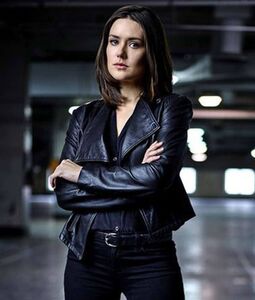 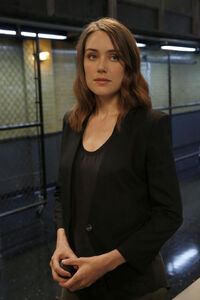 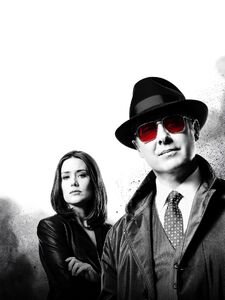 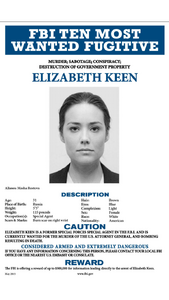 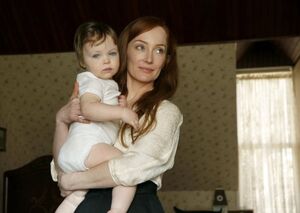 Young Elizabeth with her mother. 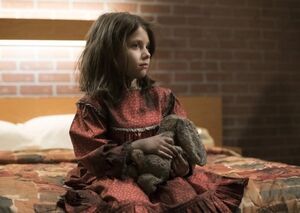 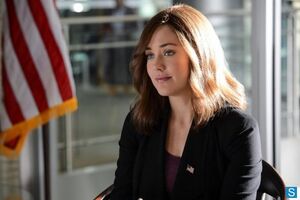 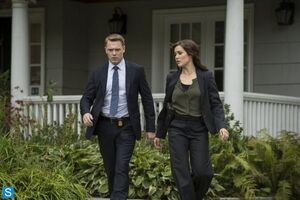 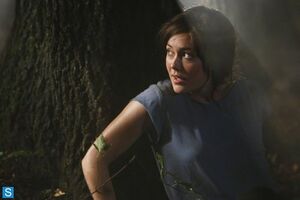 Elizabeth attempts to escape from the Stewmaker. 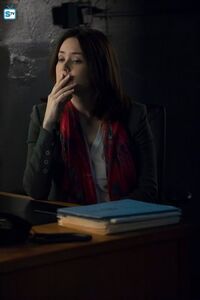 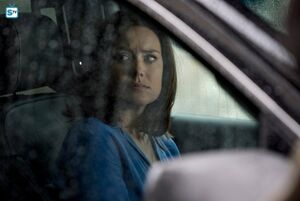 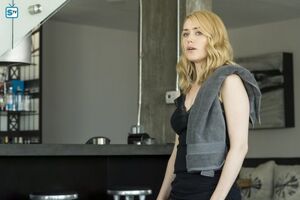 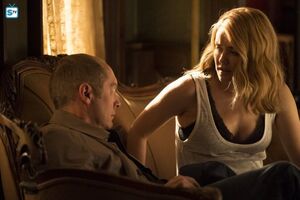 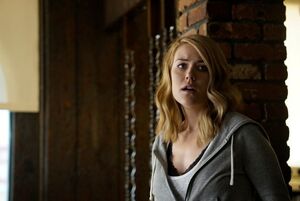 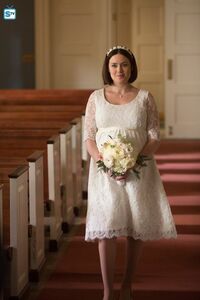 A pregnant Elizabeth during her wedding. 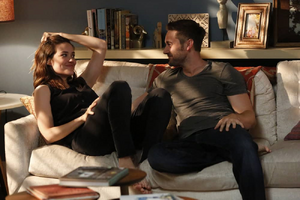 Liz and Tom Keen.
Add a photo to this gallery

Retrieved from "https://hero.fandom.com/wiki/Elizabeth_Keen?oldid=1717984"
Community content is available under CC-BY-SA unless otherwise noted.