Elize Lutus is one of the main protagonists and playable characters of the video game Tales of Xillia and its sequel Tales of Xillia 2. She is a young girl who lost her parents when she was very young and was experimented on in a facility operated by Wingul, which enabled her to cast very powerful darkness and healing magic. She also carries a talking doll around with her called Teepo.

Elize wears a dress similar to a Loli, consisting of pink, violet, and purple colors. It was given to her by Jiao when they arrived in Hamil. She has two purple ribbons wrapped around her arms, and she the boots she wears consist of an intricate design. She has green eyes and light blond hair that varies in shade; in-game, its color appears slightly different than what is depicted in her official artwork.

Elize is very quiet and shy due to the eerie and strange environment in which she was raised. She carries a purple doll named Teepo, who does most of the talking for her. When it's discovered that Teepo is projecting her thoughts, it gives a whole new dimension to her character and it is shown she has a side to her that is like most girls her age. After Elize learns the truth about Teepo, she feels very insecure, initially unwilling to accept it and feeling like she's all alone in spite of her new friends. After making up with Leia and Milla, however, she doesn't seem to mind as much, suggesting that she actually knew all along what Teepo really was; she just didn't want to believe it as he was her only friend for years. At the end of the game, Elize seals Teepo's power, placing the doll in a chest, which marks the beginning of her emotional independence.

In Tales of Xillia 2, Elize and Teepo are a team again, but Elize goes to school and has many other friends. She is much more talkative, girly, and seems to have matured a little. She complains in a skit that their adventure lacks romance, surprising Alvin because he considers her too young to think such things. She has a pen pal named "Luna", who she frequently texts on her GHS as part of school requirements. Elize lives under the care of Lady Driselle and under the tutelage of Rowen Ilbert. She still looks up to Jude and eventually sees Ludger Kresnik in the same way. She sees Milla as an older sister and wants to be like an older sister to Elle. According to Chancellor Marcia, Elize is an idealist with an innocent heart who can share her perspective with "jaded" adults. Rowen also has confidence that Elize can help bridge the gap between the people of Auj Oule and Rashugal and entrusts her with the task of aiding Lady Driselle to the very end.

Elize has a crush on Jude since he was the first person that befriended her and helped her leave Hamil. Elize and Leia would bicker and fight a lot at first but Elize and her do eventually become good friends. As for Alvin, due to his traitorous qualities, Elize does not like him for a long time. Eventually though she forgives him and the two talk and make up before the last battle.

Elize's parents were murdered by a man named Jiao when she was just a baby. Jiao was unaware that they had the child and he was filled with guilt when he found her. Jiao decided to become her guardian to atone for his actions.At some point in her past Elize was experimented on in a mysterious facility where her mana lobe was enlarged.At this facility she also receives Teepo, a talking stuffed doll who becomes a close friend. After she leaves the facility though she lives in Hamil. The villagers of Hamil mistreat and bully Elize and she does not have any human friends until Jude and Milla come along.

When Jude and Milla are in trouble Elize uses Teepo to protect them early in the game. The party does not learn her name until they return to Hamil later in the game. Jude find Elize and talks to her, convincing her to join their group. Jiao tries to stop the group from taking her with them but they defeat him in battle. When they reach Sharillton Elize meets Driselle Sharil the younger sister of the man who leads Sharillton. The two hit it off and the party offers Driselle to take Elize in. Driselle is open to the idea but when Elize, Milla, and Driselle are kidnapped by the empire things go off the rails. Throughout the adventure the group tries to have Elize leave due to her young age and the danger of the adventure but she always wants to help. Eventually the group discovers the dark past that Elize has and Elize herself discovers that her beloved friend Teepo is only a souless doll that echoes her inner feelings. This cuases Elize to fall into dispair and say some very cruel and rude things to the group. Eventually though she gets over it and becomes real friends with everyone. As the adventure goes on Elize leaves the spotlight due to her character arc being over. Still she is a valuable asset to the party in battle and does her best to support Jude and Milla's choices. At the end of the game she becomes independent, makes human friends her own age, and does not rely on Teepo for support anymore eventually putting him away. She also officially gets adopted by Driselle and becomes a member of the Sharil family. 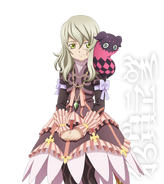 Add a photo to this gallery
Retrieved from "https://hero.fandom.com/wiki/Elize_Lutus?oldid=1648660"
Community content is available under CC-BY-SA unless otherwise noted.