No information
Ella is a scullery maid from the tale "Cinderella" and the main protagonist of the 2007 German indie film Happily N'Ever After. She is in love with Humperdink but later realizes that her true love is her friend Rick.

She was voiced by Nina Moghaddam in the original German version and Sarah Michelle Gellar in the English dub, who also played Daphne Blake and Buffy Summers.

Ella (aka Cinderella) dreams of the Prince who will sweep her off her feet. Her best friend at the palace is Rick, the palace dishwasher. She soon starts to develop feelings for Rick. Eventually, the Prince takes Ella to the ball but things don't go as intended. Once, when Frieda releases creatures to capture her, Ella runs into the woods. She makes her way to the Dwarfs house with Munk and Mambo. They then make their way to the castle to thwart Frieda's plan. Frieda then opens a protal by accident, which Ella uses as an opportunity to push Frieda back into the portal. Her and Rick then kiss for the first time. Ella and Rick then get married and live happily ever after.

Cinderella is mentioned several times throughout the film, and also appeared in a picture at the Fairy Godmother's dating agency building. 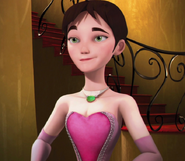 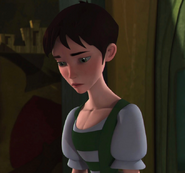 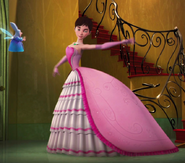 Retrieved from "https://hero.fandom.com/wiki/Ella?oldid=2005849"
Community content is available under CC-BY-SA unless otherwise noted.