Being a workaholic
Exercising

Ella is a white dove who is a student of Avian Academy in Bird Island and a supporting protagonist of The Angry Birds Movie 2.

She is voiced by Dove Cameron, who played Mal in the Descendants franchise.

Ella is a white medium dove with a crest consisting of a large, white and pink feather. Her tail appears similar to her crest. She has brown eyes, as well as a yellow beak and moderately-long, scaly legs of such color.

She is a very active member of the Bird community, and can be described as a workaholic. She also passionately likes to exercise and stay fit.

Very little is known about Ella's life during much of the Great Egg War. The night after the War ended with its final battle, Ella went speed-dating, encountering Red and Bomb, two of the few Birds responsible for defending their homeland against the Pigs ever since they threatened their offspring a few years ago. However, both of them failed to be suitable partners for her, as Ella was unimpressed with Red's signature thick eyebrows that persistently provided the impression of his grumpiness, as well as Bomb's appetite for dirt.

Some time later, hours before the Birds and Pigs, now in an alliance, were about to send a strike team to conduct an operation to thwart Zeta's plot to destroy both Bird Island and Piggy Island, Ella was among several Birds who firsthand witnessed the power of the superweapon Zeta was using to destroy the islands, and expressed concern over the possibility to evacuate. Red, determined to be the hero he always was, convinced them that they had no need to, but this nearly proved to be a dangerous mistake that imperilled them all when his initial plan to destroy the cannon fails, leading to his capture and allowing Zeta to demonstrate how more powerful it was after she completed an upgrade that allowed the weapon to fire lava-ice balls that could inflict devastation. However, Red escaped with Silver and regroups with the rest of the strike team to successfully destroy the weapon once and for all, leading everyone to realize the truth that Zeta was doing all this because she was once spurned by Mighty Eagle just as he was about to marry her. As Zeta gladly accepts the opportunity to rekindle her romance with him and finally marry, Ella was among the many who attended their festive wedding.

She appears in the opening cutscene of the same VR game is a reused clip. She also not appears playable. 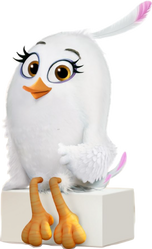 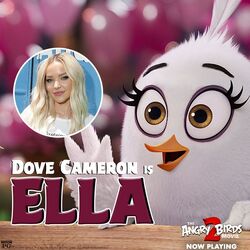