To break her gift of obedience

Monarch
Ella of Frell is the beautiful princess and the main protagonist of the best-selling book Ella Enchanted and the 2004 film adaptation.

She is portrayed by Anne Hathaway, who also played Red Puckett in Hoodwinked, Jewel in the Rio films, Catwoman in The Dark Knight Rises, Mia Thermopolis in The Princess Diaries films and White Queen in Alice and Wonderland.

When she is born, Ella of Frell is given the gift of obedience by the well-intentioned but misguided fairy Lucinda. Ella learns that the "gift" is actually a curse, in which she must obey any order or command that is given to her. Her mother, Eleanor, and Mandy, the house cook, try to protect her over the course of her childhood. After Ella picks a fight with a friend, her mother warns her never to tell anyone about the spell - her most difficult challenge.

Ella is close to her mother and they share the same free-spirited nature, but when she reaches the age of fifteen, her mother passes away and she meets Prince Charmont (or Char for short), prince of Kyrria. Her father, Sir Peter, sends Ella to school with Hattie and Olive, the two spoiled daughters of a rich woman, Dame Olga, who are as mean as their mother. Ella is mistreated and ordered around by Dame Olga and her daughters. When she is at school, Ella makes friends with Areida, a girl from the neighboring country of Ayortha. Unfortunately, Hattie orders Ella to stop being friends with Areida, and Ella in turn runs away and learns her father is attending a giant's wedding. On her adventures, she meets a kindly elf named Slannen and, aided by Char, outwits and captures bloodthirsty ogres. Just as her adventures are about to come to a close, Ella discovers Lucinda at the wedding and tries to convince her to take back her gift. Unfortunately, Lucinda orders her to be happy with her gift, but Mandy reverses it.

Sir Peter decides to marry Dame Olga in order to pay off his debt as soon as he failed to find a wealthy husband for Ella. Our heroine develops a connection with Char at the wedding via letters, but Dame Olga, Hattie, and Olive force her to be a servant in the home. Ella falls in love with Char, but rejects him when she learns her gift of obedience can harm him by tricking him into thinking she went off with another man, leaving Char heartbroken.

As soon as Char returns to Kyrria, a three-night homecoming ball is held in his honor. Aided by Mandy and Lucinda, Ella, who still loves Char, goes to the dance. Lucinda realizes that the spell she cast on Ella was wrong. On the third night, when Ella is dancing with the prince, Hattie unmasks her, causing Ella to run. After a scuffle, Char orders Ella to marry her, and she unselfishly breaks the curse. Ella accepts Prince Char's hand in marriage, and they both live happily ever after.

In the film adaptation, Ella goes on that very adventure and must save her kingdom from Prince Char's evil uncle Edgar.

Guard orders Ella to Freeze and she does so...literally! 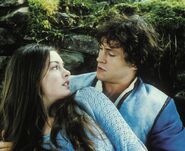 Ella chained to a tree