Ellie (Planet of the Apes)

Ellie is the human deuteragonist of Dawn of the Planet of the Apes, sharing the role with Maurice. She is the second wife of Malcolm and the step-mother of Alexander. She is a member of a struggling group of human survivors who meets Caesar and his colony under difficult circumstances. She is the human counterpart for Caesar's wife, Cornelia.

She is portrayed by Keri Russell, who also portrayed Zorii Bliss.

Ellie was an employee of the US federal Center for Disease Control, but was unable to prevent the death of her daughter Sarah from the Simian Flu outbreak. She studied the disease, having discovered that the humans who were not killed by the flu are genetically immune or else they would have died long ago.

At some point, she met and married Malcolm becoming the step-mother of his young son, Alexander, with whom she initially struggled to bond with.

Ellie first appears after Carver calls for her and their group after he has shot young Chimpanzee, Ash. She becomes worried when her husband, Malcolm attempts to talk to the apes, telling them they don't mean any harm. She and the others are shocked when the apes talk and yell at them to leave the forest and they are sent running. Arriving at the compound, they meet up with Dreyfus and they speak in the car where she explains to Dreyfus about their encounter with the apes before he tells her that she was just seeing and hearing things when she and everyone else in the group thought they saw how organized the apes were, but she insists she saw what she heard. She also tells a concerned Dreyfus that they are immune to the Simian Flu when he asks about the virus.

Going into the compound, she sympathizes with her stepson, Alexander who realizes that he has dropped his bag in the forest containing his sketchbook. She soon bears witness to the arrival of the Ape Army and listens as Caesar forbids the humans from entering ape territory. She looks to Alexander when Caesar has Blue Eyes return his sketchbook. Along with her family, she witnesses Dreyfus tells their fellow survivors that he understands why they are scared and hears him promise to find another way to power the city.

Later, in the apartment, Ellie expresses worry for Malcolm when she hears him that he bringing Carver despite his previous actions only for Malcolm to state carver is needed to work on the dam due to his former occupation. Malcolm hugs the worried Ellie and tells her he will return. They kiss and Ellie begs Malcolm to take her with him to talk to the apes as he could use her help just in case something goes wrong. Malcolm tells her he needs her to look after Alexander before the later arrives and Malcolm that he's going with him as well because he feels safer with then what he does in the city. Arriving in the forest, Malcolm instructs Ellie and Alexander that he's going to speak to Caesar alone and if he doesn't return in an hour Carver will take them back to the city but he reassures them he'll be back. After an hour of waiting, the group see the apes arrive to their location. This cause them panic as Carver tries to start the car but is unable to get it and reaches for a gun before Ellie and Alexander stop him when they see Malcolm (unharmed) walking towards them and tells they can stay.

The group sets camp out in the forest. Later that night, Ellie sits around the campfire with Alexander, Carver and other members of the group. After preparing dinner, she goes to give Malcolm his dinner and tells him that everyone is depending on him to do the right thing before he admits he is more worried about making everything safe for his son. Ellie comforts him before confessing that she is struggling to bond with Alexander while Malcolm tells her to keep trying and he'll come around. Not long after this, Ellie and Malcolm join the group around the fire where some of the express fear and paranoia over the apes most notably Carver. Ellie along with Malcolm argue with Carver who blames the Simian Flu on the apes. Ellie says the apes aren't to blame which prompts Carver to bring up the subject of his late wife and her late daughter who died during the outbreak, berating them for not hating the apes until the argument is ended.

A day later, Alexander tells her he didn't know about her having a daughter and asks what her name was. Ellie, seeing that he's only being curious and that this could be her one chance to bond with him says her name was Sarah. She accepts the teenager's sincere apology for her loss.

While Malcolm and Carver are fixing the dam, Ellie and Alexander join them but are almost killed when an explosion causes the ground to shake. The apes proceed to help them.

While tending to Carver who is suspected to have a broken leg, Ellie becomes distracted when Caesar's curious few day old infant son, Milo suddenly appears at her shoulder. She giggles as he investigates her and Alexander. She attempts to hold on to him but he pulls free and investigates the others. However, the touching moment is spoiled when Milo investigates the toolbox and uncovers a concealed gun belonging to Carver who tries to harm the infant until Blue Eyes intervenes only to be threatened as well. A shocked Ellie watches in as Caesar attacks Carver for threatening his sons before Malcolm stops him from killing him. An angered Caesar orders the humans to leave ape territory.

As the group gather their materials, Ellie asks Malcolm what they should do now before he quickly goes to fix the situation with Caesar. She follows Malcolm to Caesar's home where they find the distraught Alpha looking over his dying wife, Cornelia. When Malcolm's attempts to plead with Caesar fail, Ellie tries and tells Caesar that she can help with antibiotics. Hesitant, but not knowing what else to do Caesar allows Ellie to give Cornelia medicine to help her get better which she proceeds to do. Seeing her efforts, Caesar allows the humans to stay telling them one day and tells them the apes would help in working on the dam.

While helping out in the dam control room, Ellie watches in horror as Koba assaults Alexander before Malcolm and Maurice step in. She watches as Koba berates Caesar due to his compassion towards the humans before he violently beaten by Caesar. Sometime later, she along with Malcolm are in their tent when they spot Alexander spending time Maurice by showing him how to read. Soon with the help of the apes, the work on the dam is completed and they go to a gas station in the forest to find its power restored. Caesar would invite the humans to the Ape Village where the ape king personally shows Ellie the results of their actions as they see the power in the human colony restored. Ellie then watches as Caesar's wife Cornelia walk out of her home and is happy when Caesar and his sons embrace her.

This happy display would be ruined, when a gunshot is heard and Caesar falls down from his home to his presumed death. The tensions would grow when Blue Eyes discovers a gun and Carver's baseball cap while stating they are human items. Maurice would tell Ellie and the others to run which they do as the ape village goes up in flames and Koba takes power. While running in the forest, Ellie trips as Malcolm and Alexander help before they are forced to hide when the apes charges past them to city.

The next morning, Ellie along with Malcolm and Alexander traveled through the forest to find their car. While Malcolm goes ahead after spotting it, Ellie and Alexander find Caesar's body and look upon him in sadness before they see that he is still alive (albeit barely) causing Ellie to quickly call for Malcolm. The three soon get Caesar into the car and Ellie applies a towel to his wound telling him to put pressure on it to prevent anymore blood loss. Caesar weakly asks what became of his family as Ellie tells him she doesn't know before telling him not to speak too much. She sees Malcolm wonder where Carver got the gun and his reasons for causing the apes to attack until Caesar tells them "Ape did this".

The family take the wounded Caesar with them to the city where they find that the apes have attacked and wonder where to go as Caesar points them to a place. Upon arriving, they place Caesar on the couch as they question his reason for bringing them there Alexander shows them portrait of a young Caesar with a human man on the mantle making them realize this is Caesar's childhood home and get a better understanding for his compassion and sympathy toward them. Seeing that Caesar has loss a lot of blood, Ellie remembers that she has supplies but they are at the apartment at the compound. As she worries over how to obtain it now that the apes have taken over, Malcolm volunteers to retrieve it as she states such an act is too dangerous before Malcolm states Caesar is the only one who can stop this madness.

Ellie continues to nurse Caesar's wound before Malcolm returns with the supplies and surprisingly Caesar's son Blue Eyes who heads to the couch and speaks to his injured father. Blue Eyes sees Caesar's wound and believing the humans are responsible snarls at them, scaring them until Caesar states it was not them but Koba who shot. Ellie reluctantly ends the argument by telling Caesar they have to operate before proceeding to do so. After the surgery, Ellie joins Alexander on the porch as he asks about Caesar and she tells him they'll have to wait and see as Caesar was very strong. They are joined by Malcolm who holds them and reassures them that everything will be alright.

Sometime after Caesar's recovery, Ellie is shown sleeping on the floor with her family before she is awoken by the sounds of apes. Ellie goes outside as the loyal followers of Caesar arrive and Malcolm tells her that he is going to help them get back in the city to end Koba's reign. Malcolm kisses Ellie before leaving with the apes. Ellie's fate after this is unknown but upon Caesar taking back his place as Ape King he tells Malcolm to take his family and leave the city before the upcoming war between the apes and human reinforcements begin. 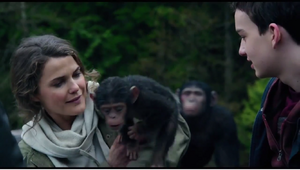 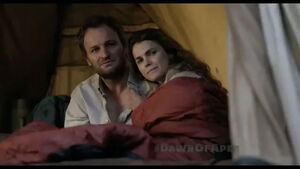