Supporting Character
Elizabeth "Ellie" Fredricksen was the childhood friend and wife of Carl Fredricksen from the Award-winning Pixar movie, Up.

All her life, she dreamed of adventure and she always wanted to go to Paradise Falls. But by the time she and Carl grew elderly, she suddenly died from old age, leaving Carl widowed and alone.

In her childhhood (8 years old), Ellie met Carl (9 years old) and they quickly became best friends; she passionately shared with him her dreams of travelling to South America, along with her desire to move her clubhouse an abandoned house in the neighborhood to a cliff overlooking Paradise Falls, making Carl promise to help her; a moment that left a deep and lasting impression on him.

Years later, Ellie and Carl married and decided to turn her old clubhouse into their new home, then became employees of the local zoo (a zookeeper and a balloon salesman respectively).

Their marriage was a happy and loving one, and they looked forward to starting a family together.

One day, Ellie discovers she was pregnant, so she and her husband begin to prepare the baby's room.

However, a few days later, Ellie suffers a miscarriage, and the doctor tells her that she can not have more children, Ellie destroyed by the pain for the loss of her fetus and from becoming sterile, her husband, Carl, to console her, decides to set aside her savings to organize a trip to the Paradise Falls, as they had always wanted.

However, the couple are forced to postpone the journey for a number of daily reality problems such as bills, repairs, medical expenses and age ailments, but without losing their happiness.

In 2008, Ellie eventually forgot about the promise as her marriage with Carl continued to flourish blissfully into old age. Then one day while out on another picnic with her husband (who was planning to surprise her with the plane tickets he had bought), she collapsed from illness and became hospitalized. Before passing away, she gave Carl her old Adventure Book, but she was unable to tell him of its true meaning (possibly due to infirmity). Her funeral was held in the same church where she and Carl had their wedding.

Unbeknownst to her husband, Ellie had added photos of their happy life together in the Adventure Book and a final message saying: "Thanks for the adventure - now go have a new one!" It is only near the end of the film - after mourning her for several years - does Carl finally come across the new content, reinvigorating him at last. 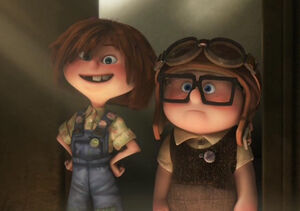 Ellie and Carl as children 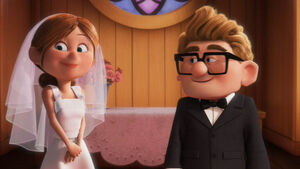 Ellie and Carl on their wedding day 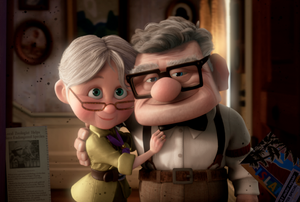 Retrieved from "https://hero.fandom.com/wiki/Ellie_Fredricksen?oldid=2204468"
Community content is available under CC-BY-SA unless otherwise noted.