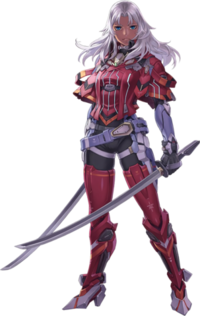 Elma is the main female protagonist of  the video game, Xenoblade Chronicles X. She is the captain of an organization known as BLADE and team leader of the Testament Union. Upon waking up Cross form his/her pod, she is the first party member to join.

She is a BLADE captain and the team leader of the Reclaimers Division. She has been tasked with retrieving the cryogenic stasis pods that were ejected from the United States Ark Ship, the White Whale. She is the first party member to join Cross after waking him or her from his or her cryogenic stasis pod. Prior to Earth's destruction, she served as the captain of the Unified Government Forces Special Vehicle Guidance Squad, or the Skell Squad. She was a subordinate to the unnamed hero who repelled the attack on the White Whale as it crashed on Mira. Elma is a cat-lover on the inside.

In the English version of the game, Elma is voiced by Caitlin Glass. Glass also reprised Elma in Xenoblade Chronicles 2.

Elma appears to be somewhere in her twenties. She has bangless, shoulder-length white hair, an olive skin tone, and wears mostly red metallic clothing with some purple, black, and white clothing. Her eyes are light blue and have an odd ring around her pupils. She is approximately 173 cm tall or 5 foot 8.

Elma is first seen after disengaging Cross from a crashed lifepod. After giving them a quick refresher about what happened to Earth, she guides them through Primordia to humanity's last stronghold, New Los Angeles. Upon reaching the city, they meet up with Lin, Doug, Irina, Gwin, and secretary Nagi. Elma, Lin, and Nagi attempt to recruit Cross for BLADE. They state the organization's purpose, emphasizing that the organization's mission is to find the Lifehold as quickly as possible in order reunite with the remaining people stored inside the structure.

To show how BLADE works, Elma and her team members are dispatched to a nearby FN site to learn more about the FrontierNav system. Upon reaching the site, the team battle Volkampf, the Pursuer who was attacking the indigens in the area. After beating the Tyrant, Elma and Lin show Cross how to install a data probe for the FrontierNav system. Upon returning to the BLADE Barracks, they meet up with Vandham. Vandham and Elma highlight each of the divisions within BLADE, leaving it to Cross to decide which division they want to join.

After being officially enrolled into BLADE, Cross and Elma's team are sent on their first mission to investigate a wrecked Skell and the missing Pathfinders team. They confront a group of alien lifeforms known as the Prone, only to discover that the missing team had been murdered by them. Despite Elma's effort to establish a peaceful negotiation with them, the aliens attack the team. After they defeat the Prone, they leave the base only to come across a Nopon named Tatsu locked inside a storage unit. Elma and her team members bring Tatsu along with them back to New Los Angeles.

For their next mission, Elma and her team are sent to investigate a Lifehold unit in Noctilum. Along the way, they meet with Lao and L. Upon their arrival, they discover that the Prone have already begun destroying it. The team defeats the attackers, but failed to save the Lifehold unit. A Ganglion member by the name Goetia appears, claiming that humanity is a primitive yet dangerous species. Elma and Lin question the Ganglion's motive for trying to kill off the human race. They quickly engage into a battle with Goetia and defeat her, however, a mech appears and takes off with Goetia. After Elma and the team discusses the Ganglion's threat to the human race, they head back to New Los Angeles to report to Vandham.

An unknown spacecraft was spotted crashing into Oblivia, so Elma and her teammates are sent to investigate the crashsite. Once they arrive Oblivia, they meet a new alien species known as the Ma-non. After conversing with them, Elma theorizes that planet Mira has a strange phenomenon that somehow causes everyone to speak and understand the same language despite. The team realize that the Ma-non are being ambushed by Ganglion Skells, so they defeat the enemies to rescue them. As Cross loses their one of their arms in battle, Elma and Lin both realize that Cross is unaware that they are a mimeosome. After being transported to the Mimeosome Maintenance Center to get repaired, Elma and Lin speak with Cross about how everyone on the White Whale is actually a mimeosome. Elma explains to them that their real bodies are actually stored inside the Lifehold Core. She also explains that if the giant countdown on the BLADE tower reaches 0, the human race will die out. Later on, when Maurice Chausson informed the group that the NLA government and the Manon reached an agreement to form a friendship treaty, Elma felt relieved since she was not sure how he would react.

Elma and her teammates journey to a tainted piece of land within Noctilum to investigate an unidentified alien mech. Prior to leaving for Noctilum, Elma defended Lin after Lao questioned about how she was able to board the White Whale at a young age--she said that Lin earned the spot due to her talent and determination rather than due to her parents' role in the development the White Whale. Upon reaching their destination, Elma senses an oppressive force pulsing from the alien mech. Wondering to herself, she feels that the ghost of its pilot is somehow still lingering. She then analyzes the mech's core containing dark matter and claims that it must be "their" handiwork. Cross notices Elma zoning out, so they asked her to see if she was okay--she declined to share her thoughts and changed the subject. Shortly after, the crew transport the alien mech back to NLA to do further research in a safe environment. While investigating the alien mech, Vandham everyone to instead study Elma's Ares Skell. After Nagi realizes what Vandham was about to say, he interrupts him before he was able to finish his sentence. This leaves everyone else in confusion while Elma is shown standing there without anything to say.

After defeating the Chimera Telethia, Elma reveals to her comrades that she is not human, but an alien who arrived on Earth thirty years prior to its destruction, took a human appearance, and helped prepare the humans for the alien war. Afterwards, it is revealed that she was responsible for introducing highly advanced technology to Earth, including Skells, BBs, and the faster-than-light travel technology used by the Ark Ships.