Being with his wife Sue.

The Elongated Man (real name Randolph William "Ralph" Dibny) is a fictional character and comic book superhero in the DC universe. He is a member of three incarnations of the Justice League, and was close to his wife, whom joined him on multiple mysteries alongside being a honorary member of the League.

The character has won and been nominated for several awards over the years, including winning the 1961 Alley Award for Best Supporting Character.

Fascinated by the "India rubber-men" he saw at carnival shows, he wanted to elongate himself. He discovered that they all drank Gingold, and he decided to collect some of it himself, and behold, he could contort his body. Moving to Central City, he created a costume for himself, and became the Elongated Man.

Ralph is a close friend of the (second) Flash in whose series he appeared often. Ralph also joined the Justice League in 1970s. Along with Sue he was an important part of the League's more comedic period. Sadly, he's remembered today more for the fact that his wife was both raped and murdered in Identity Crisis.

He died shortly afterwards in 52 while trying to find a way to resurrect her (at least he brought down an evil sorcerer and a major demon in the process). Sadly, the demon escaped later, despite the trap seemingly being absolutely inescapable. They have both reappeared as ghosts since, with the ability to possess people for short periods of time.

Randolph "Ralph" William Dibny was born in Waymore, Nebraska, and is the brother to Ken Dibny, and has a uncle named Jake. Ralph dreamed of famed and fortune in the big city, and would do anything to get attention, and often showed off and prank others.

In his youth, Ralph went to a carnival side show and became fascinated with the "India-rubber men" that he saw there, and became interested on their powers to contort their bodies. Ralph discovered that they drank Gingold, a soft drink that contained gingo, a rare fruit from the Yucatán. Though learning that some people were severely allergic to the fruit, Ralph eat the gingo fruit and could stretch and contort his body.

Ralph moved to Central City and created a costume for himself, and named himself the Elongated Man, but learned that he had to continue to drink the gingo extract every few days to keep his powers. Ralph became a crime fighter, and despite not being formally trained in the art of being of detective, he became an expert investigator. He soon became wealthy and famous from his publicity nationwide, and during one of his stuns, he met Sue Dearborn. Ralph fell in love with her immediately, and the two soon started a relationship, and later married. Afterward, the two began to tour the world, and solved mysteries wherever they went, and the couple decided to settle down when Ralph joined the Justice League.

Ralph joined the League during the "Satellite Years", when the Justice League made their headquarters aboard an Earth-orbiting satellite. The team had many members at the point the Elongated Man joined, and his main appeared to be comic relief and using his detective skills. Despite being shadowed by Batman in detective work, he remained a mainstay for the team, and Sue gave him a new costume for his birthday.

When Aquaman reorganized the League, Ralph decided to become a full-time member by committing to staying involved with the group. He remained with the Justice League until it was dissolved when Darkseid attempted to discredit Earth's heroes and destroy their legends through Glorious Godfrey, his servant. Afterward, Ralph and Sue joined Justice League Europe, a team split from Justice America after Maxwell Lord reformed the Justice League. Relocating to Paris, the two were the very few members who could actually speak French, and Sue was made an honorary member of the Justice League.

During his time on the team, Ralph helped Mason Trollbridge find Barry West, the nephew and successor of Barry Allen. Wally was taken hostage by the Turtle, and Ralph and Mason got help from Connie Noleski on capturing the Turtle's henchman, Mr. Steddy and Mr. Sloe. Ralph contorted himself as Mr. Steddy, he dragged Mason and the henchman to the Turtle's lair. Once the Justice League Europe was dissolved, Ralph and Sue resumed a nomadic lifestyle, and drifted to the periphery of the superhero community.

The two found themselves in Opal City, and met with Jack Knight, who was Starman, and stayed behind when Knight went on a secret mission in space. Around this time, the Mist and Culp began to orchestrate a crime spree in the city, and Ralph and Sue aided in defeating the villains, and decided to stay in Opal City as Knight retired from being a superhero. Later on, Ralph and Sue were involved in a machination of Maxwell Lord, who was attempting to form a street level superhero team, and reunited many former Justice League International members. The team didn't stay together long, however, and they foiled another invasion from Manga Khan and escaped from Hell.

Ralph was heartbroken upon learning that his wife was attacked in their home and murdered, and was convinced that Doctor Light was behind it, and decided to hunt him down. Ralph believed that it was Doctor Light because Sue was assaulted and raped by the supervillain when Ralph was a member of the Justice League during the "Satellite Years".

Ralph was unware that the Justice League altered Doctor Light's mind to make less threatening, and mind-wiped Batman since he refused to along with the procedure. During the hunt, Doctor Light regained his lost memories and reverted to his eviler self, and Ralph discovered that Sue was killed by Ray Palmer's ex-wife, Jean Loring. Jean hoped that threatening family members would reunite her and Ray, but this only caused Ralph more anguish. He decided to abandon his superhero persona, and stopped drinking Gingold to make himself contort.

Ralph founded Sue's tombstone defaced with a Kryptonian symbol, and he decided to track down the vandals, learning that it was the Cult of Conner. The Cult of Conner was a organization that wanted to bring back the deceased Superboy, back to life, and they planned on testing their techniques by brining back Sue. Ralph decided to joint the group, and brought four other heroes to the ceremony, but became convinced midway through it that it was a hoax. After breaking the proceeding, the building was burned down, and the straw effigy of Sue crawled towards Ralph, and called his name as it was burning.

Ralph relocated to Marseilles, and assumed the alias Alvin Burgson, but was tracked down by Detective Chimp, who wanted his help to uncover the mystery of Tim Trench's death. Ralph and Shadowpact traveled to Egypt, and the Helmet of Nabu spoke to him, and the helmet spoke to him on promising to fulfill his desires. Ralph journeyed with Doctor Fate's helm through the afterlives, and The Spectre promised to resurrect Sue in exchange for the life of Jean Loring. Despite Ralph wanting his wife back, he couldn't get vengeance upon Jean, and begins a spell to resurrect Sue.

Ralph placed the helm on his head, and shoots the spell, revealing Felix Faust, who was posing as Nabu and planned to trade Ralph's soul to Neron in exchange for his own freedom. However, Ralph reveals that he was aware of Faust's identity for some time, and that the binding sepll surrounding the tower is designed to imprison Faust. Neron came and killed Ralph, and realizes too late that the binding spell responds only to Dibny, and that the heroe's death as trapped him and Faust in Doctor Fate's tower.

Neron is able to escape, however, and Faust later escaped with the help of Black Adam by using a resurrected Isis under his mind control. When Black Adam asked Faust if his deal to trick Ralph worked, he used his skeleton to create the illusion that Adam's hope of resurrecting Isis had failed. Ralph's remain decomposed at an accelerated rate, but his wish-granting gun worked and he reunites with Sue, and the two become ghost detectives. During this time, Ralph and Sue took in Traci 13, and they gained or discovered the ability to possess human bodies.

Ralph and Sue were reanimated by Black Hand, leader of the Black Lantern Corps and an enemy of Hal Jordan, to become Black Lanterns. The two became sadistic beings, and attacked Hawkman, and tormented him before ripping out his heart, as Sue ripped out Hawkgirl's. Afterward, Black Hand came and gave Hawkman and Hawkgirl's corpses black rings, allowing them reanimate and become Black Lanterns. Hal Jordan and the White Lantern Corps managed to defeat Black Hand, having him be resurrected and give Hawkman, Hawkgirl, and others resurrected to brought back to life.

Elongated Man had the ability to stretch himself over long distances. After he died, he could possess people temporarily, and later became a Black Lantern after being resurrected by Black Hand. 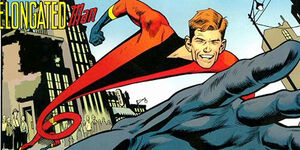 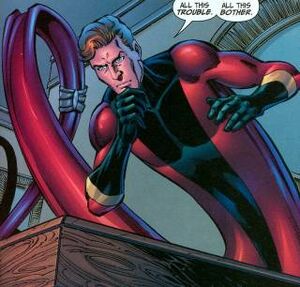 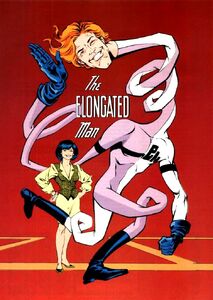 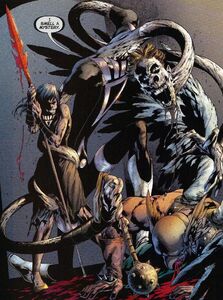 Elongated Man as a Black Lantern. 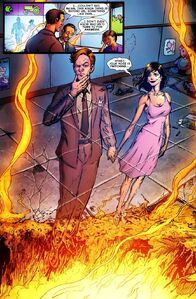 Ralph and Sue as ghost detectives.

Elongated Man with the Justice League. 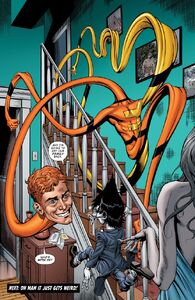 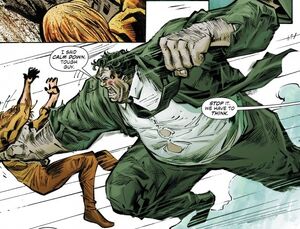 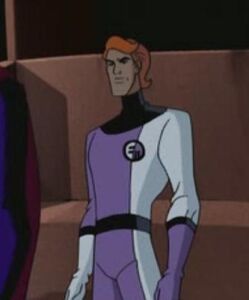 Elongated Man in the DCAU. 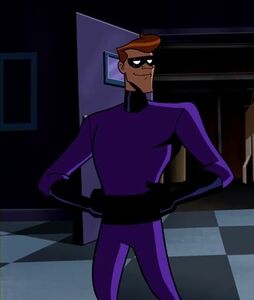 Elongated Man in Batman: The Brave and the Bold. 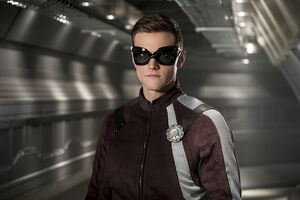 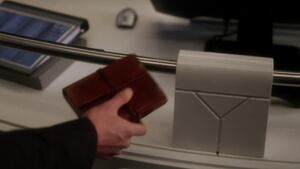