Elora is a Faun from Avalar who debuted in Spyro 2: Ripto's Rage and also made a minor appearance in Spyro: Year of the Dragon.

She was voiced by Cassandra Lee Morris.

Elora was working on the Super Portal alongside Hunter and the Professor, but Hunter tested the Portal by typing in his birthday's coordinates. This allows Ripto, Crash, and Gulp to fly out of it, the former declaring himself as Avalar's new king, so Elora tells Zoe and her company to scatter the orbs across Avalar so that Ripto couldn't bring out any more trouble from where he came from.

A week after this, after finding out that Ripto hates dragons, Elora, Hunter, and the Professor travel to the mining realm of Glimmer and summon Spyro to the realm. Elora is awed when he appears and volunteers to help Spyro in Avalar throughout his quests. After Spyro collects forty orbs, Elora opens up the castle in the Winter Tundra so that he could defeat Ripto. After Ripto is defeated, Spyro asks her to come to Dragon Shores with her, but she declines and decides to repair all of Ripto's damage instead.

After the Sorceress is defeated for the first time, Elora briefly appears in Agent 9's lab, after which she watches the fireworks show with Spyro. 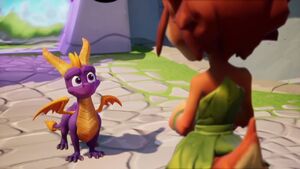 "Hello, we didn't get a chance to introduce ourselves before." 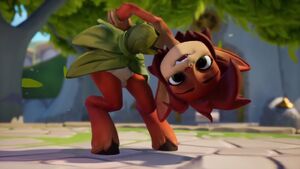