Elric of Melniboné is a fictional character created by Michael Moorcock, and the antihero of a series of sword and sorcery stories centring in an alternate Earth. The proper name and title of the character is Elric VIII, 428th Emperor of Melniboné. Later novels by Moorcock mark Elric as a facet of The Eternal Champion.

Elric first appeared in print in Moorcock's novella, "The Dreaming City" (Science Fantasy No. 47, June 1961); subsequent novellas were reformatted as the novel Stormbringer (1965), but his first appearance in an original novel wasn't until 1973 in Elric of Melniboné. Moorcock's albino character is one of the better known in fantasy literature, having crossed over into multimedia, such as comics and film, though efforts towards the latter stalled over the years. The novels have been continuously in print since the 1970s.

Elric was the last emperor of the stagnating island civilisation of Melniboné. Physically weak and frail, the albino Elric must take drugs—later retconned to mean special herbs—to maintain his health. In addition to herb lore, his character becomes an accomplished sorcerer and summoner, able to summon powerful, supernatural allies by dint of his royal Melnibonéan bloodline. Unlike most others of his race, Elric possesses something of a conscience; he sees the decadence of his culture, and worries about the rise of the Young Kingdoms, populated by humans (as Melniboneans do not consider themselves such) and the threat they pose to his empire. Because of his introspective self-loathing of Melnibonéan traditions, his subjects find him odd and unfathomable, and his cousin Yyrkoon (next in the line of succession, as Elric has no heirs) interprets his behaviour as weakness and plots Elric's death.

As emperor of Melniboné, Elric wears the Ring of Kings, also called the Ring of Actorios, and is able to call for aid upon the traditional patron of the Melniboné emperors, Arioch, a Lord of Chaos and Duke of Hell. From the first story onwards, Elric is shown using ancient pacts and agreements with not only Arioch but various other beings—some gods, some demons—to assist him in accomplishing his tasks.

Elric's finding of the sword Stormbringer serves as both his greatest asset and greatest disadvantage. The sword confers upon Elric strength, health and fighting prowess but must be fed by the souls of those struck with the black blade. In the end, the blade takes everyone close to Elric and eventually Elric's own soul as well. Most of Moorcock's stories about Elric feature this relationship with Stormbringer, and how it—despite Elric's best intentions—brings doom to everything the Melnibonéan holds dear. 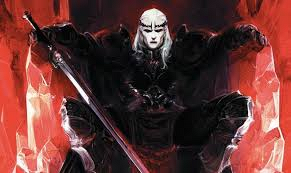 Elric on the ruby throne 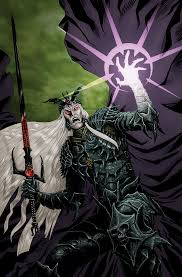 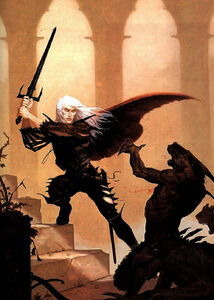 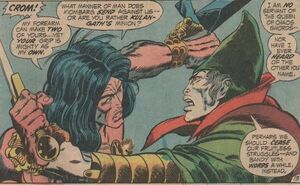 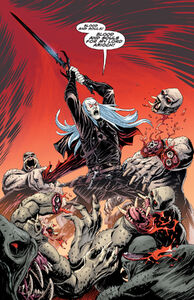 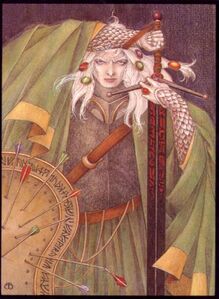 Retrieved from "https://hero.fandom.com/wiki/Elric_of_Melnibonè?oldid=2139186"
Community content is available under CC-BY-SA unless otherwise noted.