Elsa Bloodstone is a fictional character and superheroine from Marvel Comics and its universe. She is the daughter of the legendary monster hunter Ulysses Bloodstone, who passed on his bloodgem choker and briefly trained her to become a monster slayer like him. Elsa was given superhuman abilities and immunity to vampire bites due to having the bloodgem in her blood, and became a member of the Nextwave, Doom's Avengers and Midnight Sons.

She was created by Dan Abnett, Andy Lanning, and Michael Lopez, and first appeared in Bloodstone #1 in December of 2001.

Elsa is the daughter of an ruthless monster hunter named Ulysses Bloodstone. Elsa's relationship with her father has been complicated, though it is implied that he trained her to become a hunter like himself. Nonetheless, Elsa began her path in becoming a prominent monster hunter in her adult years. At some point after Ulysses' death, Elsa possessed a Bloodgem choker, effectively granting her the same abilities as his, but since her Bloodgem is worn externally, she became more susceptible to danger than he ever was.

Elsa Bloodstone was born in Boston, Massachusetts to monster hunter Ulysses Bloodstone and Elise, and her parents later separated when she was two years old. Ulysses trained his daughter when she was just a baby, having her fight a Blight Beast, and throwing her to a horde of great white sharks to remove her weaknesses. Eventually, Ulysses gave Elsa to Elise, and entrusted Frankenstein's Monster to give his daughter a fragment of the Bloodgem when she was old enough.

Elise and Elsa settled in England for the latter to go school, but the child began to have frequent dreams about monsters and vampires. Eventually the two learned of Ulysses' death, and flew to Boston to settle his estate at the Bloodstone house. At the house, Elsa discovered a secret chamber where she encountered Frankeinstein's Monster (nicknamed "Adam"), who told her about Ulysses. Adam gave her the Bloodstone choker, and when she wanted to know why it was flashing, was transported to Bosnia and Herzegovina.

In Herzegovina, she was found in the midst of a struggle between Dracula and the Nosferatu. The count recognized the Bloodgem fragment and attacked Elisa, but the Bloodgem choker blasted him away. Dracula was then impaled by the Nosferatu, who then took him away while Adam returned Elisa to the Bloodstone estate. Adam later designed a costume for Elsa, and the two were transported to Egypt by the lamp. The two met N'Kantu, the Living Mummy and later confronted Nosferatu, who bit Elsa but was destroyed by the Bloodgem energy in her blood. Elsa and her allies then freed Dracula, who then destroyed the Nosferati to by exposing them to sunlight.

After those events, Elsa decided to become a monster-hunter, and began an online blog to create an electronic encyclopedic guide for monsters and aliens she encountered or heard of. Eventually, Elsa dyed her hair red and joined Nextwave to help them fight against the Beyond Corporation. After her time with the team, she registered to the United States government by joining the 50-State Initiative. Returning to her monster-hunting ways, she hunted down the Children of Goram to Prague where she was impregnated by one of the monsters. The Bloodgem killed the offspring while it was inside her and she puked it up, and vowed to kill all monsters and to be last of the Bloodstone line.

Elsa later became a staff member at the Braddock Academy, a group founded by Captain Britain to help superheroes. A group known as the Covenant wanted to recruit her to help them defeat the Dreaming Maiden, whom they previously attempted to kill, but failed due to hiring Wolverine. Elsa began to search out the Maiden to finish her father's work, which brought her into contact with Wolverine in the present day. She was also brought into conflict with Covenant members Murderous Lion, Jefferson Chambers, Wyatt Crowley and Menace.

Elsa also got involved with the Thunderbolts, having to deal with the Punisher when he stole her magic regalia to battle Ghost Rider, and later when the group need her magical assistance. In the wake of World War Hate, Doctor Doom asked for Elsa and many other superheroes help to stop an evil Scarlet Witch. After Valeria Richards condensed a portion of Scarlet Witch's powers, she told Elsa and the team that their job was done. 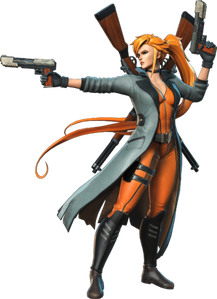