For other heroes of the same name, see Elsa.

In love
Elsa Van Helsing is the tritagonist from the Disney animated feature Frankenweenie.  She is a friend and love interest of Victor Frankenstein.

She is voiced by Winona Ryder, who also played Lydia Deetz in Beetlejuice, Kim Boggs in Edward Scissorhands, Veronica Sawyer in Heathers, Joyce Byers in Stranger Things, and Allison Taylor in The Simpsons.

She is a kind next-door neighbor.

After finding Victor's recently reanimated dog Sparky at the town's pet cemetery, Victor sees the monsters heading to the fair and goes with his classmates to help deal with them — the Sea-Monkeys explode after eating salt-covered popcorn, and Colossus is stepped on by Shelley, while the rat and Shelley are returned to their original, deceased forms after both being electrocuted. During the chaos, Persephone, Elsa's pet poodle, is grabbed by Mr. Whiskers and carried to the town windmill with Elsa and Victor chasing after. The townsfolk blame Sparky for Elsa's disappearance and chase him to the windmill, which Mayor Burgermeister accidentally ignites with his torch. Victor and Sparky enter the burning windmill and rescue Elsa and Persephone, but Victor is trapped inside. Sparky rescues Victor, only to be dragged back inside by Mr. Whiskers. A final confrontation ensues, and just as Mr. Whiskers has Sparky cornered, a flaming piece of wood breaks off and impales Mr. Whiskers, killing him. The windmill then collapses on Sparky, killing him again. To reward him for his bravery and saving Victor, the townsfolk gather to revive Sparky with their car batteries, reanimating him once more. Persephone comes to Sparky as the two dogs share their love and kiss. 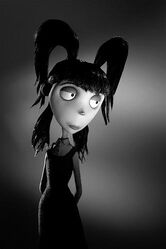