Mischievous Sibling
Emile is the deuteragonist of the Ratatouille franchise. He is the tritagonist of Ratatouille, and one of the two main protagonists (alongside Remy) of Your Friend the Rat.

He was voiced by Peter Sohn.

He is a brown (his mother's fur color), overweight rat, and is slightly larger than his younger brother. He is friendly, understanding, and is the only one whom Remy tells about his cooking, TV watching, and reading talent. He never tells their dad Django, due to his brotherly support to Remy (although he did carelessly tell his friends about Remy's activities inside Gusteau's). Emile loves food; however, he often swallows food whole and, to Remy's disappointment, doesn't savor the flavors.

One day, Emile and Remy are smoking a mushroom by the chimney, before being struck by a flash of lightning. Impressed by the popcorned mushroom, the two venture into the kitchen for saffron. The old lady is asleep, but a TV is on where Remy hears the news that Gusteau, Remy's idol, has died. The old lady awakes, sees the rats and promptly produces a shotgun with which she blasts the walls and roof. Her inaccurate shooting, however, brings down part of the ceiling where the entire rat clan lives. After the rats manage to escape on their "rescue boats," Emile tries to coax Remy to grab onto a spatula Git is holding, but the old lady fires her rifle again, causing Remy to drift away from Emile and into the sewers.

One night, Emile unexpectedly finds Remy. After the two brothers embrace, happy to see each other again, Emile and Remy reunite with their family who believed Remy to have died in the rapids of the sewers. Django asks Remy to stay, but Remy shows his loyalty to Linguini, having bonded with his new human friend while being absent from his rat colony.

When Remy is captured by Skinner, who uses blackmail to order Remy to create a new successful frozen foods line, Emile notices and brings Django to help him free Remy from Skinner's limousine. With help from Emile and the entire rat colony, Linguini, Colette and Remy present to food critic Anton Ego and a disguised Skinner a version of an ancient dish, Ratatouille.

Emile is last seen hanging out at the new restaurant La Ratatouille with Django and the rest of the rat colony as Remy surreptitiously prepares food for them and the human customers.

Your Friend the Rat

In the animated comedy short, Emile is the deuteragonist. He and Remy teach the viewers about the history of the rat in an attempt to bring a better understanding between the two species.

Emile appears in Epcot at Walt Disney World at The Paris Pavillon. 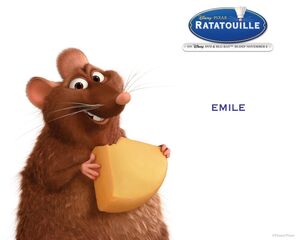 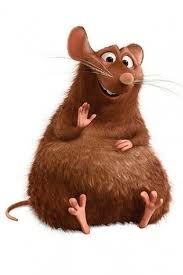 Retrieved from "https://hero.fandom.com/wiki/Emile?oldid=1987693"
Community content is available under CC-BY-SA unless otherwise noted.