Playing games with her "siblings"

Freedom Fighter
Emma is the main protagonist of the anime and manga series The Promised Neverland.

She is voiced by Sumire Morohoshi in the Japanese version and Erica Mendez in the English version.

Emma is the main character of the series and one of the three oldest children living at Grace Field House. Like Ray and Norman, she is 11-years-old and consistently gets perfect scores during their daily exams. She is identified by her ID number 63194 and known for her ample optimism as well as her capable athleticism.

Upon discovering the truth of the orphanage, Emma teams up with Norman and Ray to escape the house. Her strong sense of selflessness insists that every one escape together, even if most of their siblings are below 6-years-old, an aim that Ray deems crazy and plain reckless.

Due to her capable athleticism, Emma has great physical abilities and amazing reflexes, as seen when she is always the last one to be caught in the hide-and-seek games at Grace Field. Emma is the child with the most breath and physical capacity in the house, being superior even to Norman who can only catch her because of his strategies.

Although Emma is not as bright as Norman and Ray, she is able to compete with them on an intellectual level. Emma was considered as one of the three geniuses at Grace Field as she received full marks in every test.

Emma has an incredible ability to learn fast, which allowed her to always be among the top three children. Thanks to this, she is also able to memorize things perfectly, as she said it would be easy to memorize 10 types of team formation. She proved to know and understand Morse code. She has a great ability to manipulate her expressions and feelings, fooling Mama Isabella who even checked her heartbeat. 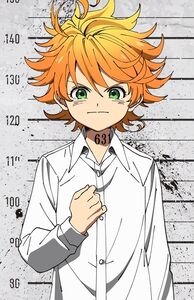 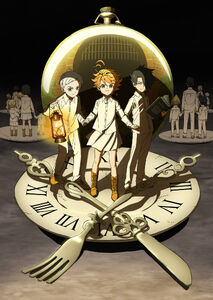 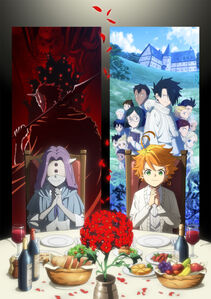 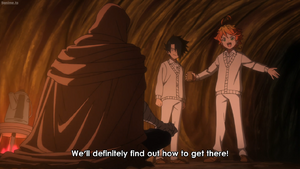 Emma Upon Hearing the Truth of the Human Farms
Add a photo to this gallery
Retrieved from "https://hero.fandom.com/wiki/Emma_(The_Promised_Neverland)?oldid=2185619"
Community content is available under CC-BY-SA unless otherwise noted.