Wolverine and the X-Men

Member of the X-Men, formerly head of her school for mutants
Secretly member of the Hellfire Club

the ability to enter a diamond-form

Emma Frost is one of the members of the X-Men in the Marvel Comics cartoon Wolverine and the X-Men joining early on. Though initially cold and ruthless, as well as having her own agenda, she steadily becomes a warmer and friendlier individual.

Emma first appears shortly after the reforming of the X-Men, offering to help them locate the missing Charles Xavier. Knowing that Emma once owned her own school for mutants, one that taught several irresponsible mutants, Wolverine was suspicious of Emma's intentions, not helped by her cold professionalism. Eventually though, Wolverine caved in and allowed Emma to join. Using Cerebro she tracked Xavier to Genosha. During the trip there Emma pointed out to Cyclops that she could also use Cerebro to locate Jean Grey, who Emma said was still alive. After bringing a comatose Xavier back with them, Emma stayed on with the X-Men.

Though inititally still cold and ruthless, Emma noticably became less unpleasent as the show progressed, coming to show a softer and more compassionate side, particularly with Scott Summers, who she also came to develop feelings for (especially after he accidentally kissed her). Hating to see Scott suffer over Jean's continued absence Emma did what she could for him, and eventually the two were able to locate a now amnesiac Jean Grey. Emma restored her memories, but also turned her over to the members of the Hellfire Club's Inner Circle. However, Emma believed that the Inner Circle was taking Jean so they could purge her of the malevolent Phoenix Force. Upon learning that the Inner Circle had lied to her and intended to seize control of the Phoenix Force for their own ends, Emma went back to the X-Men and with Cyclops' help attempted to rescue Jean. Selene Gallio gleefully revealed Emma's past with the Inner Circle, causing the X-Men to lose their trust in her. However, Emma was able to convince Wolverine that she could stop the Phoenix Force before it destroyed everything and though still enraged by her betrayal, Wolverine was willing to let her try.

Emma confronted the Phoenix Force and allowed it to enter her while she was in her diamond form. Right before the Phoenix Force shattered her, Emma begged Cyclops to forgive her. Despite her apparent death, the show's creators revealed that they planned to have Emma return, had the show been allowed a second season. 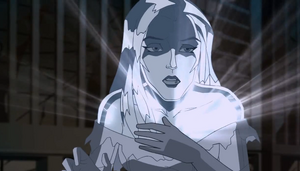 Emma in her diamond form right before she dies 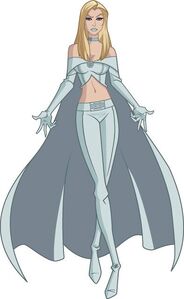 Retrieved from "https://hero.fandom.com/wiki/Emma_Frost_(Wolverine_and_the_X-Men)?oldid=1870350"
Community content is available under CC-BY-SA unless otherwise noted.