Get back to the palace and take revenge on those who wronged him (formerly).
Graduate school (succeeded).
Return to his human state from his llama form (succeeded).
Become the Emperor again (succeeded).

He starts off as a spoiled rich brat and an uncaring teenage emperor, who is turned into a Llama by his former adviser Yzma, who wants to take his place. After a journey with a good-hearted peasant Pacha, Kuzco becomes much kinder and nicer, which causes him to adjust his attitude, and gets the potion to turn back into a human.

He is voiced by David Spade in the films and J. P. Manoux in the television series and video games.

Initially, Kuzco is a overly-showoff, rude, kind of lazy, and very spoiled teenager who only cared about himself, even going as far as threaten to destroy an entire village to build himself a summer home for his upcoming 18th birthday. He also casually fires people, like when he fired Yzma out of the blue after a few times, and is very insulting towards women, showing to be quite vain.

He is also prone to be a bit on the snarky side, out right insulting some people in his mind and feels he's in the right most of the time. He also enjoys the spot light being on him at all times, and enjoys to dance and show off his 'groove', but is angered when someone makes this hard, such as when he had an old man thrown out of his castle after he interrupted his intro.

Later in the film, when he turned into a llama and met up with Pacha, the other hero of the film, he started to change. While vain and uncaring towards the man whom was in charge of the village he was going to destroy, Kuzco and Pacha began to grow a friendship that in the animated series sort of became a sort of father-son bond. At the end of the film, Kuzco has grown into a more kind hearted but still fun-loving young emperor who, instead of destroying Pacha's home, makes a summer area for everyone in his kingdom to enjoy, including Pacha's family.

In Kronk's New Groove, Kuzco seems to still have some of the spotlight-hogging personality traits from the original film, but shows he wants to be shown that he's changed and is very forward with making sure others remember that he's now a lot nicer than before.

He is also shown to be emotional many times in this film and in his movie as he is prone to crying over things that upset him and when he tells Pacha he wants his help while in tears.

Kuzco is the young ruler of an unnamed Incan kingdom. He is known for being selfish and vain, and enjoys dancing to his own theme music every morning. Recently, Yzma, his royal adviser, has been ruling the kingdom behind his back. Kuzco decides to fire her for this, despite the many loyal years she's served. Soon enough, Kuzco summoned the village leader named Pacha, to discuss the building of Kuzcotopia, a summer getaway for himself. Kuzco reveals his plans to destroy Pacha's village to make way for his getaway. Meanwhile, Yzma and her lackey Kronk are in their secret lab, thinking of ways to murder Kuzco (after Kronk inadvertently gave her the idea).

She planned to invite him for dinner and poison his drink. That night at dinner, Kronk accidentally pours extract of llama in Kuzco's drink instead. Kuzco is turned into a llama and knocked unconscious by Kronk. Yzma then sends her minion to finish the job by throwing him over a waterfall. Kronk accidentally loses Kuzco, and the llama emperor ends up on Pacha's cart. When Kuzco awakens, Kuzco, upon realizing what happened, accused Pacha of turning him into a llama and then kidnapping him. He then (foolishly) travels through the jungle, despite Pacha's insistence that it's a very bad idea to do so at night. Ultimately, his advice proved to be sound due to nearly being killed by a pack of Jaguars, with Pacha saving him at the last minute (although they ended up falling into a river and then falling over a waterfall with sharp rocks at the bottom, Kuzco apparently being resigned to his fate, and undergoing an incident where he regained consciousness just as Pacha was about to undergo CPR, causing Kuzco to mistake Pacha for trying to kiss him in disgust). Pacha decides to help him get back to the palace, although only under the condition that he change his mind about Kuzcotopia.

After a while, Kuzco claims he has changed his mind, but the moment the palace is in plain sight, he tells Pacha the truth, revealing that he was going to proceed with Kuzcotopia. After their fight destroys the bridge to the palace, Kuzco and Pacha are forced to take a longer route. Meanwhile, Yzma announces Kuzco dead and takes over the kingdom. While wallowing in the lap of luxury, Kronk accidentally confesses about not killing Kuzco. The villains then go out on a hunt for him. At a local restaurant, Pacha learns about Yzma's plan and rushes to tell Kuzco.

Pacha tries to warn Kuzco that Yzma and Kronk are trying to kill him, but Kuzco, convinced that Yzma is loyal, doesn't believe Pacha and falls out with him, believing Pacha's claim to be a plan to save his hilltop from destruction, and then orders Pacha to go away. Kuzco makes way for Yzma and Kronk, only to overhear them discussing that they are seeking to kill him, and that the kingdom doesn't miss him. Kuzco realizes Pacha was right, but Pacha has left. With no hope of returning home or becoming human again, Kuzco sadly accepts his fate and seeks out a herd of llamas, but not even the llamas seem to accept him. However, Pacha appears and forgives Kuzco.

Kuzco and Pacha run to the latter's house to get some supplies, only to discover that Yzma and Kronk are there as well, posing to be Pacha's "relatives". As Pacha explains the situation to Chicha, Kuzco pops from the window and startles Chicha, who whacks him with her frying pan. While Pacha's family distracts Yzma and Kronk (mostly Yzma), he and Kuzco race into the distance to get a head start.

A race to the palace begins and ends at Yzma's lab. Kuzco desperately searches for the human potion but Yzma arrives and battles the heroes, also summoning her royal guard under the premise that they were responsible for killing Kuzco (despite the llama being Kuzco), transforming most of them into animals, and Kuzco undergoing further transformations while trying to get the potion (Tortoise, songbird, whale, and eventually Llama again, causing him to briefly celebrate becoming a llama again before remembering that the point was to become human again). During the fight, Yzma is transformed into a cat, and Kuzco retrieves the vial. Kuzco becomes human again, and sets out to redeem himself, building a small summer cabin on the hill next to Pacha's home, and become part of Pacha's family at the peasant's invitation.

Meanwhile, outdoorsman Kronk becomes a scout leader, with kitten Yzma forced to be a member of the troop.

Kuzco acts like the director of Kronk's movie, and breaks the fourth wall by talking to the audience. He admits he has changed: "I'm nice now. Didn't you see the first movie?" However, he have still a bit of ego; near the end of the movie, he shows up in women's clothing, claiming he is Kronk's wife, announcing, "You like how I weaseled my way into this movie?" (this is Kuzco's only appearance in Kronk's starring film, alongside performing to the reprise of "Be True To Your Groove"). Throughout the film, Kuzco pops in and out to give comments on the scene in question.

In the TV spin-off, Kuzco must go to Kuzco Academy, a school he instituted and financed. He must pass all his classes to remain emperor, but Yzma and Kronk are out to make sure he fails. If he fails even one class, he will not be emperor, and Yzma will take over the empire. He is still self-centered. In the series Kuzco develops a love interest, named Malina. Like the films, he often breaks the forth wall by pausing the episode and interacting with the viewers.

Kuzco's character is further explored through the series. He can be rather whiny and easily jealous of anyone who gets a small amount of glory or attention. At the start of every episode, Kuzco would interact with the viewers and shout "Theme music!" which begins the show. In the middle of the shows, he would begin the session "Kuzco's Doodles" where he poorly sketches something reflecting whatever's going on in the scene. Since he was kicked out of his palace, Kuzco now resides with Pacha and Chicha. However, Chicha openly dislikes Kuzco's traits such as him feeling Chicha should act as a servant.

In the series finale "Graduation Groove", Kuzco regains his rightful place as the emperor. He even allows Pacha and his family to move into the palace. He also makes Kronk his royal adviser, and demotes Yzma to his assistant. Kuzco and Malina also become an official couple. 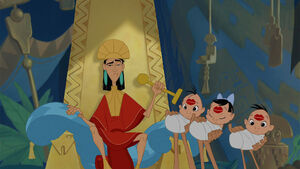 Kuzco kisses the babies…sort of. 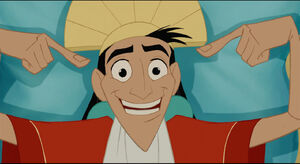 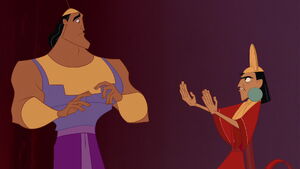 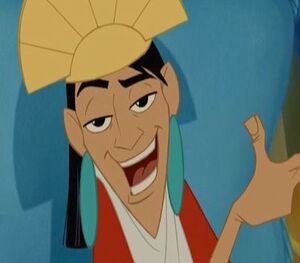 Kuzco as an llama. 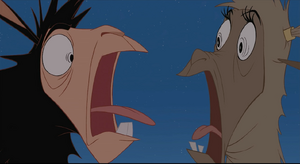 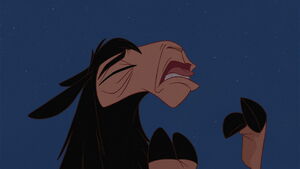 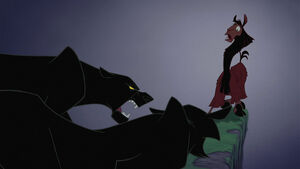 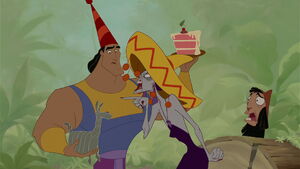 Kuzco overhears that Yzma does indeed, plan to kill him! 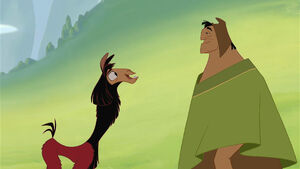 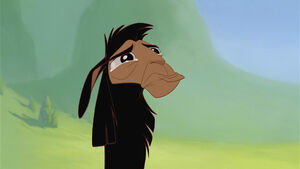 Kuzco releasing stress after Pacha asks if he's tired of being a llama. 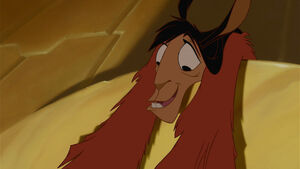 Kuzco saves Pacha from falling to his death. 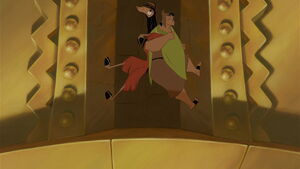 Kuzco and Pacha use the shoulder technique to retrieve the vial. 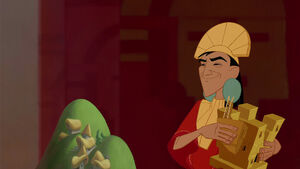 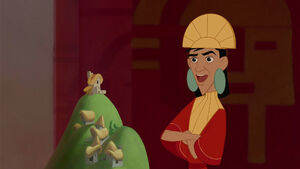 Kuzco puts Pacha's house model back in its proper place. 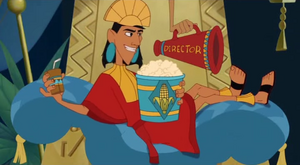 Kuzco takes the role of the director in Kronk's New Groove.

Kuzco at the Villains Wiki.

Retrieved from "https://hero.fandom.com/wiki/Emperor_Kuzco?oldid=1545387"
Community content is available under CC-BY-SA unless otherwise noted.