Heroes Wiki
Register
Don't have an account?
Sign In
Advertisement
in: Article stubs, One Piece Heroes, Heroic Criminals,
and 33 more

Turning people's genders
Tricking his enemies of his "disadvantage".

Emporio Ivankov, or Iva for short, is the "Queen" of the Kamabakka Kingdom, known as "Okama King" and a "Miracle Person", and a commander of the Revolutionary Army's G Army. He is one of the supporting character of One Piece. He is one of the tritagonists of Marineford Arc (alongside with Boa Hancock).

He was formerly a prisoner of Impel Down kept in Level 5, living in a secret "Okama Paradise" in level 5.5, but has since returned to his post as Queen of Kamabakka Kingdom. He challenged Sanji to defeat his 99 masters of Newkama Kenpo for the secret of the "attack cuisine" and a boat, during the two year timeskip.

He was formerly voiced by Norio Imamura and currently voiced by Mitsuo Iwata in the Japanese version, and by Randy Pearlman in the English version.

Iva is the G Army Commander of the Revolutionary Army, which focuses the Grand Line. Likewise, he used to be the ruler of Kamabakka Kingdom, known as a "Miracle Worker" for saving the lives of several people. However, because he's also an officer of the Revolutionaries trying to overthrow the World Government, he was captured and put into the world's worst prison, Impel Down. Ivankov's power comes from eating the Horm-Horm Fruit (Horu Horu no Mi), which allows him to inject hormones into the human body. These hormones can cause sex changes, increased adrenaline, bodily growth, and other things, which in his words make him an "engineer of the human body". This is the reason that he was able to heal many people from the brink of death. However, he claims he's not a "Miracle Worker," and merely allowed people with the "Will to Live" to go on. He can't help those who don't have the drive to help themselves. He is also a master of Newkama Kenpo. 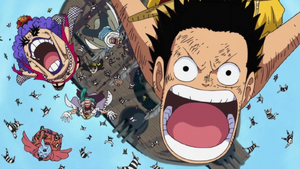 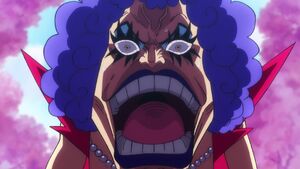 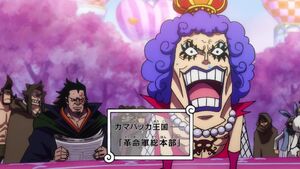