Singing
Reading
Painting her nails
Seducing men with her charm

Amora the Enchantress is a fictional charter and was villainess turned anti-heroine from the Marvel Comics and Universe. Amora is a sorceress who has been in love with Thor and helped him genuinely, making her transition to anti-heroism more easily. Though she's an opportunist who seeks to use others for her own goals, she has shown remorse for her actions and has aided superheroes in stopping threats such as Surtur and Set.

She was created by the late Stan Lee and the late Jack Kirby, and first appeared in Journey into Mystery # 3 in April 1964.

Amora was born in Asgard to unnamed parents, and later ran away from home to become an apprentice of the powerful sorceress Karnilla. She studied the basic arts of Asgardian magic until she was expelled by Karnilla for being undisciplined, and Amora would gain other magical skills from seducing other magic users. Amora would later enlist Brunnhilde to help her in conquest, but once the latter realized this, Amora used her magic to entrap Brunnhilde within a mystical crystal. After the incident with Brunnhilde, Amora seduced Skurge the Executioner into assisting her in schemes, and would withhold favors from him to keep him as a pawn.

When the Enchantress encountered Thor in his guise as Dr. Donald Blake, she immediately wanted to seduce him and failed, sending Skurge to dispose of Thor's love-interest Jane Foster. Thor managed to save Jane, and the Enchantress and Skurge were defeated in combat against the God of thunder. Enchantress would become an ally of numerous supervillains and supervillains team, such as the God of mischief Loki Laufeyson, the Mandarin, and Baron Zemo to gain more power and get revenge on Thor. She has battled countless superheroes along the way, such as the mutant Scarlet Witch and the Greek mythology hero Hercules when she created a giant monster. Amora would go on to aid Doctor Doom in disrupting Mr. Fantastic and the Invisible Woman's wedding, and later kidnapped the Hulk to make him be part of her rock trolls army to conqueror Asgard. During her time, she lost Skurge to her rival Casiolena, but defeated her with the help of the Defenders, and battled Thor and the Avengers.

Amora would also want to control a dimensional rift, and when noticing that it was forming a club in New York, went there to perform and earn the favor of the club manager. However, the club manager became smitten with Dazzler, leading to Amora to attempt to use her powers to force Dazzler to age to death. She was stopped by superheroes as they saw Dazzler as one of their own, and the Enchantress decided to flee. The Enchantress was later forced to fight on Battleworld when abducted by the Beyonder, and was easily defeated by She-Hulk. Amora was then taken to Reed Richards to be healed, and Thor let her out of the device so he could get a fellow Asgardian's perspective on recent events. Amora then transported Thor and herself to another part of the planet, and attempted to seduce Thor once again, but was thwarted by a creature. Returning back to the headquarters, Amora left Thor and managed to escape when the place was over run, and attempted to seduce Doctor Doom.

Amora's countless crimes earned her the wrath of Odin, and she was exiled from Asgard until she aided her home when Surtur and his legions attacked. Earning her right to return, Amora became involved with Heimdall, and later used her sorcery to make her sister Lorelei to fall in love with Loki since she refused to help the Asgardians fight Surtur. Though she started to show examples of being a hero, she would often fall back into old habits, as she is an opportunist who seeks to use others for her own ends. Skurge eventually became tired of his service with Amora, and sacrificed his life when helping Thor in Hel. Though she used Skurge through most of his service, she grieved his death and attempted to make new Executioners by forcing others to wear the armor. In addition, she attempted to force Wonder Man to fall in love with her, but he managed to retaliate her magic when she made him stronger.

Amora is beautiful woman wears a green triangular tiara, She wears a green suit that often showcased her cleavage, sometime she wears a more regal suit that cover her body similar to those wears by the Vikings women.

Amora is rather conflicted and Pompous yet at the end is somewhat well-intentioned, she has been influenced by Thor to make the right thing and more than one occasion, she has helped Asgard from greater evils like Malekith or Surtur, she is in good terms with Thor and to a minor extension Dazzler. 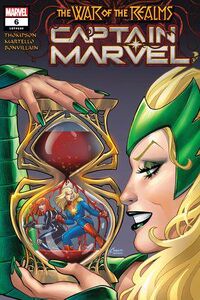